Is the audio track accompanying a TikTok video of President Joe Biden and first lady Jill Biden boarding the Marine One helicopter unusual (or fake)? No, that's not true: While someone has set the sound balance on this video clip extremely loud, it is typical for the Marine One helicopter to be making noise while the rotors are not yet turning. Other press videos shot on Thursday April 29, 2021, showing the Bidens boarding Marine One also feature background noise from the waiting helicopter.

The claim appears in a video published on TikTok by "christian4191975" on April 29, 2021, (archived here) which was captioned, "#SkipTheRinse #foryoupage #fypシ" Captions added to the video read:

the helicopter sounds are epic
and what happened to the lawn care dude?

This is how the post appeared on TikTok at the time of writing: 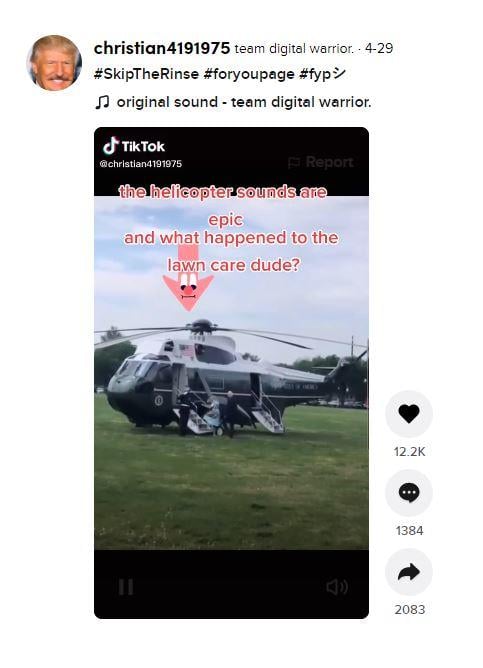 The hyperlinked text, "original sound - team digital warrior" opens a page of 12 associated reaction videos based on the one posted by "christian4191975". The reactions express disbelief or confusion because the helicopter is making noise even though the rotors are not turning. The videos are captioned with phrases such as: 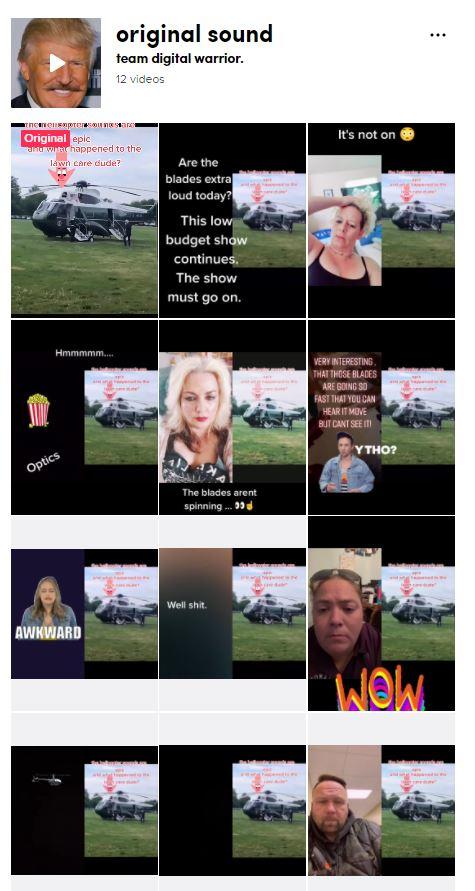 This video posted by Fox channel 10 in Phoenix on April 29, 2021, shows another view of the Bidens boarding Marine One that day. The reflection of the still rotor blade shows in the pilot's window. This was the much publicized moment when President Biden picked a dandelion for the first lady. The caption posted with the video says:

As the Bidens left the White House and crossed the grassy area on the Ellipse, the president suddenly stopped to bend down. He picked a white puffy dandelion and handed it to the first lady.

For more than a month now, Biden has had to meet his helicopter, Marine One, on the Ellipse, the park below the South Lawn perimeter of the White House and just north of Constitution Avenue. Marine One has had to land and take off from this not-usual spot because of the construction, and Biden has had to motorcade approximately two minutes from the White House to the Ellipse to depart and arrive, where before he could ostensibly walk out his back door a few hundred yards and board his private transport.

Below is a video showing former President Donald Trump and then-first lady Melania Trump departing the White House on January 20, 2021. In the portions of this video shot from the ground, Marine One is very loud even though the rotors are not turning.

Lead Stories reached out by email to the press contact at Lockheed Martin, the manufacturer, for more information about the sound made when idling by the Sikorsky Vh-3D Sea King helicopter, the Marine One helicopter in this video. We will update the article when a response is received.