Does titanium dioxide in food kill children and mentally disable them? No, that's not true: The Food and Drug Administration approves the compound as safe as long as it meets the allowed concentration levels of no more than 1% by weight of the food.

The claim appeared in a Facebook post (archived here) published on October 8, 2018. The post features photos of a Little Debbie Honey Bun and its ingredients, including titanium dioxide (TiO2), and a description of the compound. The caption reads:

Somebody need to sue Lil Debbie everything these kids is eating it's killing them and making them mentally retarded they can't help but to make mistakes. AMERICA you something else and I found another 1 of your killers. In every neighborhood Corner store.Depopulation is Really in Effect😱How is This legal🤔 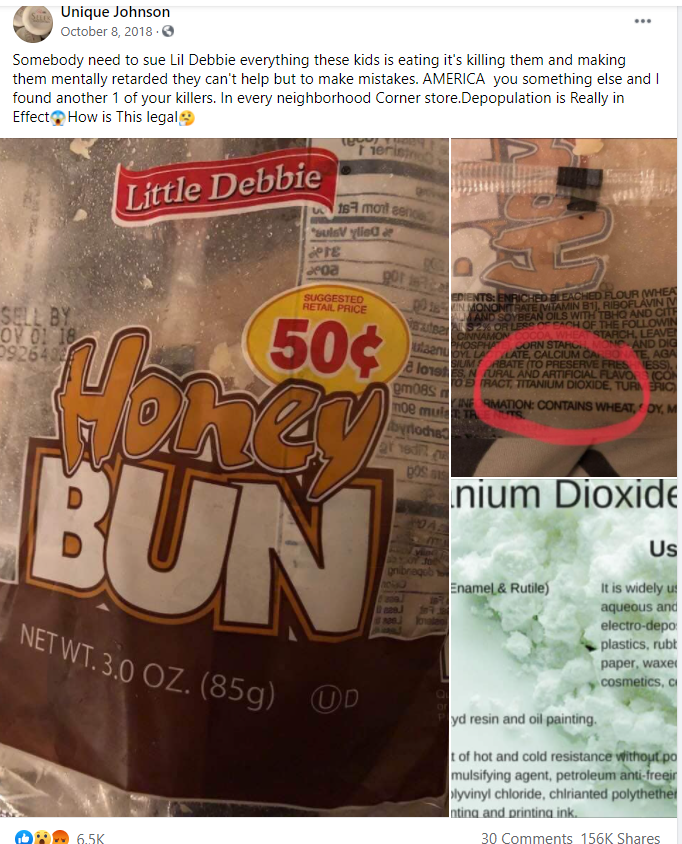 Variations of titanium dioxide are used for different products. When used in non-food products, such as paint, plastic and printing ink, it is a white powder.

An article from the Journal of Nanobiotechnology explains the difference:

TiO2 minerals contain impurities such as iron, chromium, vanadium or zirconium that confer a spectrum of different colors. Manufactured TiO2 is, instead, a white powder commonly used as a pigment in ceramics, paints, coatings, plastics and paper due to its high refractive index. Pure TiO2 assembles in three crystal structures, i.e., anatase, rutile (with tetragonal coordination of Ti atoms) and brookite (with rhombohedral coordination of Ti atoms), but only anatase/rutile or mixtures of these two polymorphs are employed in food ... the anatase form is the most frequently used in the food sector.

The FDA's listing for titanium dioxide in its Code of Federal Regulations states:

The color additive titanium dioxide may be safely used for coloring foods generally, subject to the following restrictions: (1) The quantity of titanium dioxide does not exceed 1 percent by weight of the food.