Does this photo show Mississippi River water meeting but never mixing with the salt water of the Gulf of Mexico? No, that's not true: This photo shows river water which has reached the Gulf of Mexico and has flowed out over the top of the denser Gulf salt water. The abundance of nutrients in the river water, much of them from agriculture, can host an algae bloom that can deplete the available oxygen in the saltwater Gulf as the algae decomposes, a condition called hypoxia. This results in problems for the marine life that must either swim away if it can, or die. For this reason, the area of oxygen-depleted water is known as a "dead zone." The dead zone happens every summer. Natural and man-made conditions far upstream affecting the runoff in the Mississippi watershed can determine how large the dead zone in the Gulf of Mexico will be.

The image in this meme dates back to at least 2015 when it was filmed from the air in a video posted on YouTube. The photo has circulated as a meme since 2016 and resurfaced in a post (archived here) published on Facebook on June 28, 2021. The caption in the meme reads:

Where the Mississippi River meets the gulf not mixing ever with one another, and people say there isn't a God. If he can tell the ocean where to stop then he can surely take care of anything against me or you!...MY GOD IS AWSOME

This identical photo was used in an August 22, 2019, Facebook post by "EPA Water" announcing, in a news release, "EPA Provides $1.2 Million to Hypoxia Task Force States and Continues to Promote National Dialogue to Reduce Excess Nutrients and Enhance the Nation's Waters." 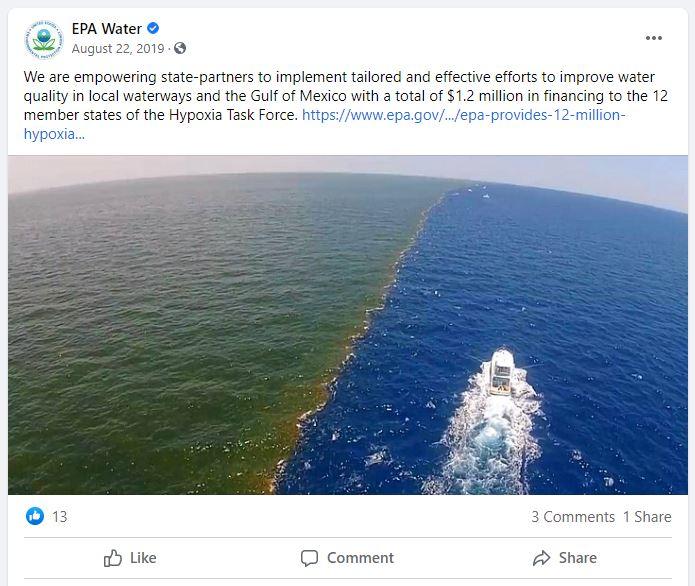 #ICYMI - NOAA is forecasting this summer's Gulf of Mexico #hypoxic area or "dead zone" - an area of low to no oxygen that can kill fish and other marine life - to be smaller than the long-term average. Learn more: https://t.co/4y9BdCNjeI pic.twitter.com/puEzrEBBGO

Lead Stories has written about the dramatic color contrast of another river plume -- where the Fraser River joins the Strait of Georgia near Vancouver Island in Canada. This Mississippi River meeting the Gulf of Mexico photo appears in that article because in the past it has also been misidentified as the Gulf of Alaska.