Does an old photo show a young Nancy Pelosi walking with her dad, who appears to be Adolph Hitler? No, that's not true: The black-and-white image shows Helga Goebbels, the daughter of the chief Nazi propagandist Joseph Goebbels, walking with the German dictator in 1936.

The claim appeared in a post (archived here) published on Facebook on July 24, 2021. The historic image was captioned:

Nancy Pelosi walking with her dad!

A reverse image search for the photograph led to an article on the RareHistoricPhotos.com page: Adolf Hitler on a walk with Helga Goebbels, 1936. 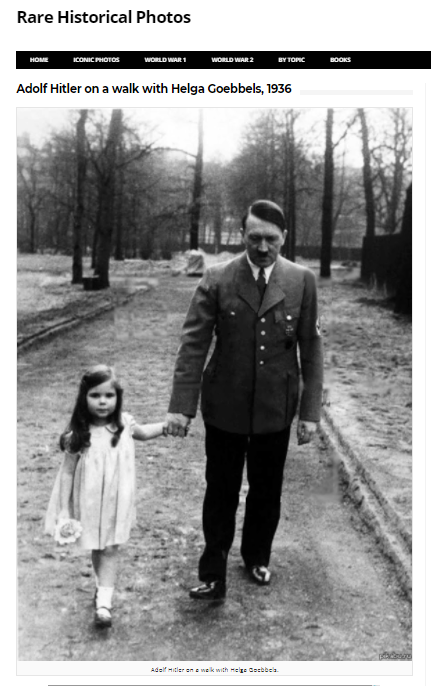 The article described the close relationship between the German dictator and the family of his propagandist. It opened:

Helga was the oldest of Goebbels' six children and notably his favorite. Goebbels was proud of his eldest daughter and would go straight to her cot as soon as he returned from his office, to take her on his lap. Helga was a "daddy's girl" who preferred her father to her mother. She was reported to have been a lovely baby who never cried and just sat listening uncomprehendingly to the Nazi officials with "her blue eyes sparkling". It was not unusual for Hitler, who was fond of children, to take her on to his own lap while he talked late into the night.

House Speaker Nancy Pelosi was born in Baltimore, Maryland, on March 26, 1940. She is the daughter of a Baltimore Democrat who served in the U.S. House and as Mayor of Baltimore.