Was the fifth Mike Lindell election fraud video correct in claiming a major American voting machine company is controlled by Chinese Communist Party investors and that voting machines used in the 2020 election were hacked via the internet? No, the claims were made without accompanying evidence. Federal banking and finance forms fall well short of supporting the claim that Dominion Voting Systems is controlled by China. U.S. intelligence agencies and federal internet security officials say there's no evidence the election was hacked. The major U.S. manufacturers of electronic voting machines say they are not controlled by China, their machines were not hacked and that they will put those statements up against the video's claims in in several lawsuits.

The claim was made in a video titled "Your Wake Up Call" (archived here) posted on FrankTV.com on August 10, 2021. It opens:

After the 2018 mid-term elections, an investigation was launched to delve into irregularities in the U.S. election results. Detailed logs documented entries into the tabulation system for the election itself.

Internet users who went to the link saw this: 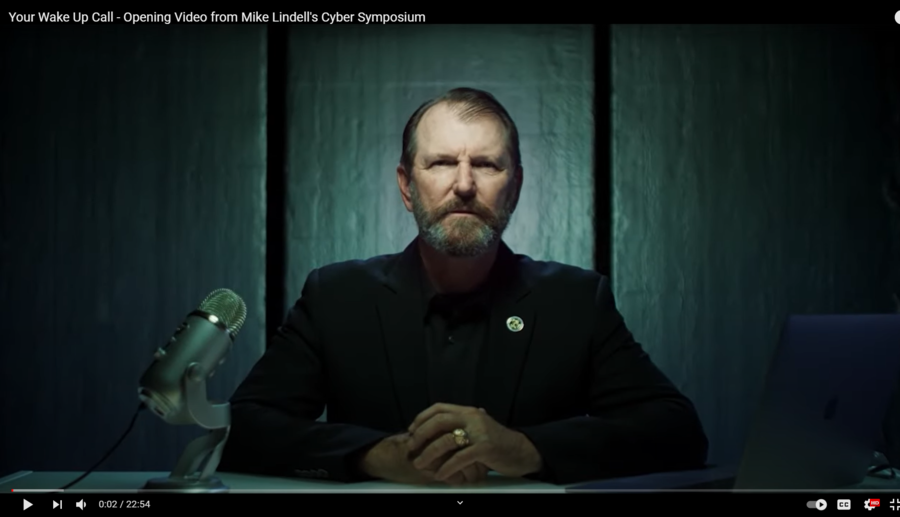 Col. Phil Waldron (ret.), narrates the film, saying the 2020 election was stolen from incumbent President Donald Trump using voting machines controlled by the Chinese government and/or George Soros. The film takes pains to identify Soros as an atheist Jewish billionaire financier and says he gives millions to groups Waldron said are bent on turning the U.S. into a communist country.

It is the fifth video in a series produced by Mike Lindell about his claim the election was stolen from his friend Donald Trump. The video was shown as the opening of Lindell's Cyber Symposium, August 10-12, 2021 in Sioux Falls, South Dakota. During the symposium, Lindell did not, as promised, release a full copy of the internet traffic captures he says are proof of the hack.

Working from the video information broadcast during the symposium, Lead Stories found multiple clues that Lindell's "pcaps," offered as evidence of a hack, were manufactured video produced by Dennis Montgomery, whom conservative allies of Lindell have labelled a "conman." The Arizona Republic has reported Montgomery sold more than $100,000 worth of evidence to Maricopa County Sheriff Joe Arpaio that his department later called junk and a New York Times investigation found Montgomery "bamboozled" the Department of Defense with fake data he said was proof of secret Al Qaeda messages hidden in Al Jazeera newscasts.

At the 2:15 mark of this YouTube re-post of the film, Waldron skims over important details to say: "... our investigation confirmed that the entire U.S. election system is under the total control of private equity firms and foreign money," continuing:

At the 2:58 mark, Waldron continued painting his dark picture of a U.S. election system in thrall to foreign figures:

Scytl, the parent company of Clarity Elections located in Madrid, Spain, a data management and early election night reporting company, went bankrupt in May of 2020 and was subsequently purchased in a closed private equity deal ...

the election sites for numerous counties in the U.S. go to a Clarity Elections web address. The counties don't own or control their voting data.

Waldron seems not to know the difference between companies like Dominion and Election Systems & Software, which states, counties and cities hire to help run elections, and republishing companies like Edison Research and Scytl, which pick up the publicly available vote counts and package them for easy display on television, on government and commercial websites and in newspapers.

Election results are available at any county courthouse, where the official tallies are stored on paper or on county computers.

Kathy Rogers, a spokesperson for ES&S, said Scytl and Clarity have none of the control Waldron warns of. In an August 12, 2021, email to Lead Stories, Rogers wrote:

The Scytl mistake has been made before by conspiracy theorists who can't tell the difference between data storage and data display. Lead Stories debunked a mid-November 2020 hoax claiming U.S. election data was being massaged in Spain by Scytl.

Claim: U.S. elections are conducted on machines and software from a company controlled by Communist China

The details of the high finance manuever Waldron calls a simple purchase of control are nowhere near that clear. Lead Stories researched claims about Chinese control of Dominion when they were made in December 2020, finding China did not buy Dominion for $400 million. In that fact check, Lead Stories found the American UBS had in 2018 taken majority control of the Chinese UBS:

A Swiss investment bank's New York subsidiary, UBS Securities LLC, in October bought $400 million in shares Dominion's parent company, Staple Street Capital LLC. While it appears three of the four board members of that subsidiary's board are Chinese and could represent Chinese investors, shareholder information is private, so it is unknown if China or any other government owns shares. The parent company, UBS, does substantial business in China and is partial owner of a China-based firm, UBS Securities Co. Ltd., which did not buy the Staple Street shares.

It is not clear whether those shares represent the purchase of Dominion Voting Systems, nor even what percent of Staple Street they represented. Lead Stories searched for proof that the main UBS board included powerful Chinese Communists and was unable to find public documentation of the claim, since UBS New York is a private company whose shareholder information is not publicly available. A December 9, 2020, Bloomberg company profile of UBS Securities LLC listed among board members Luo Qiang, Ye Xiang and Mu Lina, but Lead Stories was unable to definitively identify the identities and nationalities of all three, some of whom appear to have since left the board.

On July 12, 2021, Dominion said there is no truth to claims of Chinese government buying Dominion to use its machines to manipulate election results. As independent confirmation of the company's assertion, Dominion spokesperson Kay Stimson wrote in an August 12, 2021, email that reports from several federal agencies refute the claim Waldron is recycling:

A declassified intelligence report on foreign threats released by the Office of the Director of National Intelligence (ODNI), found "no indications that any foreign actor attempted to alter any technical aspect of the voting process." The U.S. Department of Justice (DOJ) and the Department of Homeland Security (DHS) also released a report concluding there is "no evidence" that foreign governments or other actors interfered with the elections, and claims about foreign governments manipulating or owning election infrastructure used in the 2020 elections are "not credible."

Claim: The election fraud team led by Waldron has proof election systems were connected to the internet and thereby hacked

At the 3:40 mark of Your Wake Up Call, Waldron asserts:

Our investigation also revealed that, contrary to the current political narrative, the election systems and their equipment were connected to the internet making them infinitely hackable.

He goes on, at the 6:12 mark, to say: "... through forensic analysis of election management system computers in Antrim County, Michigan, affidavits from numerous election officials in Georgia as well as the operators manual for Dominion's Democracy Suite 5.5, our teams have gathered indisputable evidence that the entire system can indeed be connected."

The Republican-controlled Oversight Committee of the Michigan State Senate studied the Michigan claims, tested machines and demanded documentation and found them to be without basis. Chairman Sen. Edward McBroom, R-Vulcan, wrote:

The strongest conclusion comes in regard to Antrim County. All compelling theories that sprang forth from the rumors surrounding Antrim County are diminished so significantly as for it to be a complete waste of time to consider them further ...

Later in its report, the committee singled out the Antrim County claims as especially false:

The Committee recommends the attorney general consider investigating those who have been utilizing misleading and false information about Antrim County to raise money or publicity for their own ends. The Committee finds those promoting Antrim County as the prime evidence of a nationwide conspiracy to steal the election place all other statements and actions they make in a position of zero credibility.

Stimson wrote that there's no basis for the claim that Dominion machines were plugged into the internet to permit hacking on election day or during vote counting. "As we state on our website, 'Voting systems are designed and certified by the U.S. government to be closed systems that do not rely on Internet connectivity for use.' You can confirm this fact with the U.S. Election Assistance Commission, which certifies U.S. voting systems for use." Stimson said a video snip - used in Your Wake Up Call - purporting to show internet activity on a Dominion machine is the subject of a lawsuit: "Dominion has filed a defamation lawsuit against One America News Network, which broadcast this false and misleading claim."

Kathy Rogers at Election Systems & Software said cellular modem transmission of unofficial reports is possible, but the voting system's Election Management System (EMS) "is designed never to be connected to the internet and is required by federal standards to be operated in a hardened mode, which means that all external internet connectivity has been locked down and prohibited:

Central count tabulators are also incapable of being connected to the internet. Some larger counties may internally network central count units within an election office, but again these are never connected to the internet. In a few states, it is legal to use cellular modems to transmit unofficial election results from precinct tabulators after the polls are officially closed and after all voting has ended. Generally, when people insist that voting systems are internet connected, they are referring to this functionality. Final official results are physically uploaded at election headquarters before final certification. The physical ballots and printed results tapes are always protected. To be clear -- with the exception of this legal use of cellular technology for the transmission of unofficial election results in the handful of states who allow it -- there is zero internet connectivity in voting systems.

The Waldron video goes to great lengths to connect Soros to numerous nonprofits he calls "radical," including the Ford Foundation. He goes on, at the 14:43 mark, to say:

Not true, Dominion's spokesperson said in her email to Lead Stories:

Dominion has no ties or company ownership relationships with the Pelosi family, Feinstein family, Clinton family, or George Soros. The company works with all U.S. political parties, and our customer base and government outreach practices support this non-partisan approach.

Kathy Rogers of Election Systems & Software wrote: "No, this rumor is completely false."