Does every peer-reviewed study in existence suggest that being infected with COVID-19 builds stronger immunity to the delta variant than does vaccination? No, that's not true: Conclusions drawn from research into COVID immunity differ, depending on the methods, population tested and other variables. Though infection can yield some degree of immunity, medical professionals emphasize that vaccination cuts the risk of serious illness or death, which you risk by waiting to get infected.

And though it has not yet been peer-reviewed at the time this was written, a leading UCLA researcher's lab reported new data in September 2021 documenting that natural immunity is highly variable, depending on the vaccine load that infects a patient. On the other hand, researchers in Israel showed hospital patients with natural immunity fared better than those who'd been vaccinated. Despite differing findings, the National Institutes of Health reports research it funded has shown vaccination delivers longer-lasting and broader-spectrum immunity. Regardless of who is correct, there are studies supporting elements of both points of view, which would be a rarity in research, especially research into a new virus.

The claim appeared in an October 17, 2021, Facebook post (archived here) on the "Nursing Memes" page under the title "Dear Nurses." It opens:

Every Peer Reviewed study in Existence suggests immunity gained after recovering from a bout of COVID-19 is more protective against the new Delta variant than vaccine-induced immunity. Natural immunity was estimated to be about 13 times stronger than having two doses of the Pfizer-BioNTech vaccine.
Stop spreading false news Karen from Cath Lab.

Because "natural immunity" requires a bout with COVID, infection instead of vaccination may not be the wise choice, points out Jesse Erasmus, a Ph.D. vaccine developer and vaccine researcher in microbiology at the University of Washington Medical School who publishes research on the effectiveness of mRNA vaccine technology. Erasmus is part of the research team and clinical staff at the University of Washington that built COVID expertise during the first major U.S. outbreak of the pandemic.

In a September 1, 2021, email to Lead Stories about recent studies, such as the Israeli research that demonstrate the strength of natural immunity, Erasmus wrote, "... it still does not warrant choosing natural infection over vaccination given the relative risks associated with each of those choices."

National Institutes of Health Director Francis Collins wrote in his June 22, 2021, blog that there is increasing evidence vaccination offer longer-lasting and broader protection against SARS-CoV-2 variants:

... a new NIH-supported study shows that the answer to this question will vary based on how an individual's antibodies against SARS-CoV-2 were generated: over the course of a naturally acquired infection or from a COVID-19 vaccine. The new evidence shows that protective antibodies generated in response to an mRNA vaccine will target a broader range of SARS-CoV-2 variants carrying 'single letter' changes in a key portion of their spike protein compared to antibodies acquired from an infection.

These results add to evidence that people with acquired immunity may have differing levels of protection to emerging SARS-CoV-2 variants. More importantly, the data provide further documentation that those who've had and recovered from a COVID-19 infection still stand to benefit from getting vaccinated.

This is why the Centers for Disease Control and Prevention (CDC) strongly discourages people from taking the risk of waiting to be infected to develop immunity. As the following chart points out, those who are not vaccinated are six times more likely to become infected and 11 times more likely to die if infected. 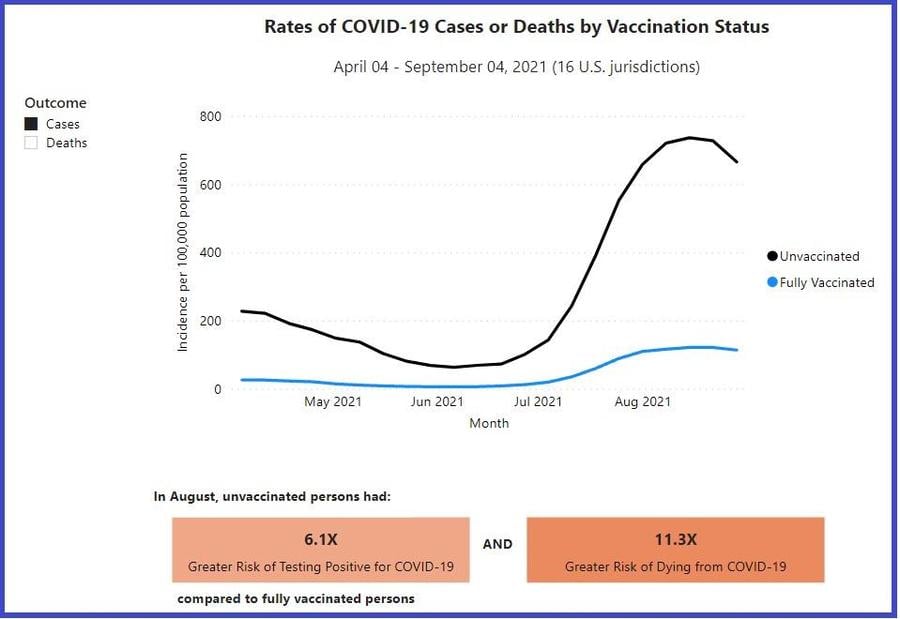 The debate over natural immunity vs. vaccine-based immunity arises from findings such as this study of patients in Israel's Maccabi Health System, which showed that those who survived an infection had better results than those who were only vaccinated. Those who had been both infected and injected wound up with the strongest defense against COVID-19, the researchers found.

There can be data problems with a retrospective study such as this one, according to the August 26, 2021, research review in the American Association for the Advancement of Science's Science magazine. That article laid out the risks in oversimplifying the findings, noting that intentional infection among unvaccinated people would be extremely risky. In a backward-looking study that relies on data not necessarily collected for the study, there is not assurance that all participants are tested. People who have been infected and then develop symptoms again might be less likely to get tested because they think they are already immune, which could skew the data.