Did the head of a German hospital who killed himself release a video before his death, calling COVID vaccines a genocide and saying he could no longer live with the lies? No, that's not true. Instead of showing Dr. Thomas Jendges, the now-deceased managing director of Chemnitz Clinic, the video shows a German gynecologist named Guido Hofmann, who is active in the COVID-doubter movement.

The claim appeared in an article (archived here) published on the Before It's News website on November 20, 2021, titled "German Clinic Director Releases Video Before Being Suicided? We Have Been Warned (Video)." It opens:

In this shocking video, Dr. Thomas Jendges gives a final warning before possibly committing suicide? He was the Chief of a clinic in Cheminitz in Germany has committed suicide having said he could no longer live with lies to citizens and patients and calling the 'vaccines' genocide. Chemnitz mourns the loss of Dr. Thomas Jendges (55).

Whatever the truth of the death, his brave, truthful, honest and honorable video message STANDS !!!

This is what the article looked like on Before It's News on November 30, 2021: 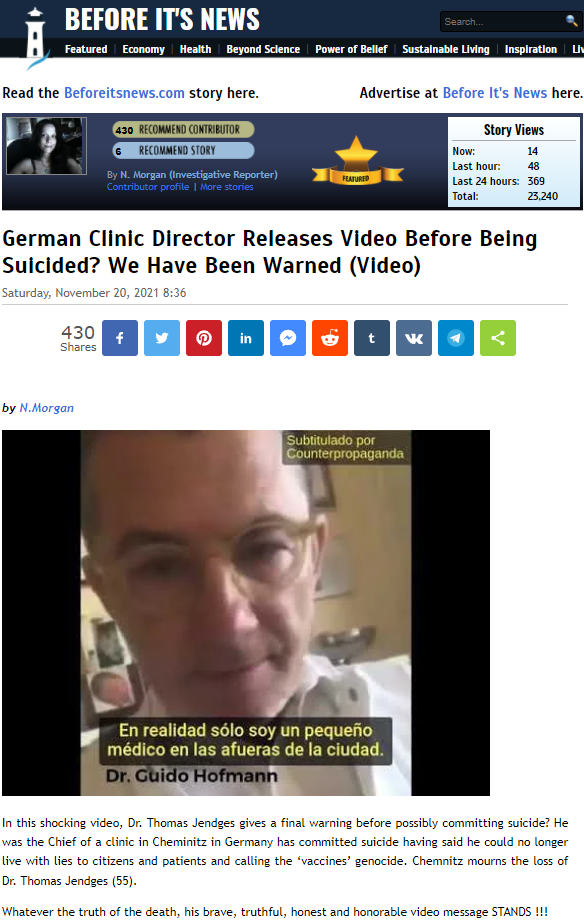 The article includes the video attributed to Jendges. The head of the Chemnitz Clinic died on November 2, 2021, after falling from the top of the building where he worked. German police investigated Jendges' death, according to the German Press Agency (dpa), and ruled it a suicide.

While the article reports the video is from Jendges, a pair of still images taken from the video -- and included in the story -- show Hofmann's name at the bottom of them.

About what is happening at this moment in Germany ... I can honestly summarise it, as a doctor, as a vaccinator, as someone who has treated people with ear, nose and throat infections his whole life, I can only repeat that what is happening here has nothing, absolutely nothing to do with a virus. It is, worldwide, the introduction of a world-wide dictatorship - unfortunately, it has to be said.

On November 23, 2021, Hofmann published a video on his Telegram channel saying the video being circulated in the Before It's News article and others was originally uploaded to his Facebook page in August 2021 and shows him, not Jendges.

Lead Stories debunked an earlier story involving Jendges. The claim said he had left a suicide note describing the COVID-19 vaccine as genocide and a crime against humanity. German authorities said they found no such note.