Does a viral video show a priest dying suddenly during a livestream after receiving a COVID-19 vaccination? No, that's not true: The priest fainted during Mass and appeared at the church at a later date.

The claim appeared in a video posted on numerous platforms, including GETTR (archived here) which published the clip on November 23, 2021. The title of the video read:

Priest 'dies suddenly' during live stream after getting vaccinated... 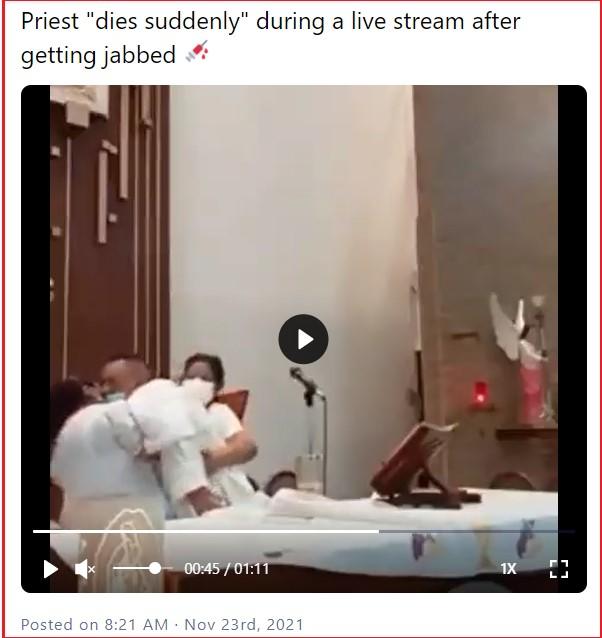 The clip was taken from a livestream from Parroquia Nuestra Señora de Guadalupe Reina de México, a church in Acapulco, a coastal town in Mexico. The Mass, presided over by priest Ángel Cuevas, was celebrated in September 2021. At the time of writing, this Mass is not posted among the church's livestream videos on Facebook. A Google search of "sacerdote se desmaya" -- which translates to "priest faints" in English -- shows several versions of the clip, one posted September 3, 2021.

Cuevas fainted but did not die during the Mass. Another livestream video from the church recorded on September 4, 2021, the day after a copy of the fainting video was posted, features an appearance from Cuevas -- who was standing upright in his vestments -- starting at the 35:45 mark. Lead Stories used the assistance of Google Translate to understand his comments in Spanish: He said he was in better health. At the time of writing, the first "Most Relevant" comment from the livestream, translated from Spanish, read, "Thank God Father Angel Cuevas is better God bless and take care of him 🙏🙌😊😘🤗😉🙏." A screenshot of the livestream, along with the comment, is below: