Did the military arrest Mike Donilon, President Joe Biden's senior advisor? No, that's not true: An official at the Pentagon told Lead Stories that this claim was false. Also, there has been no other media coverage of Donilon being arrested by the military except for the original article published by Real Raw News -- a site that has a history of writing false stories about high-profile people.

U.S. Marines on Saturday served a military arrest warrant on Deep State agent Mike Donilon, an American attorney and campaign consultant who served as a Senior Advisor to fake President Joe Biden. He was the chief strategist of Joe Biden's 2020 criminal presidential campaign. 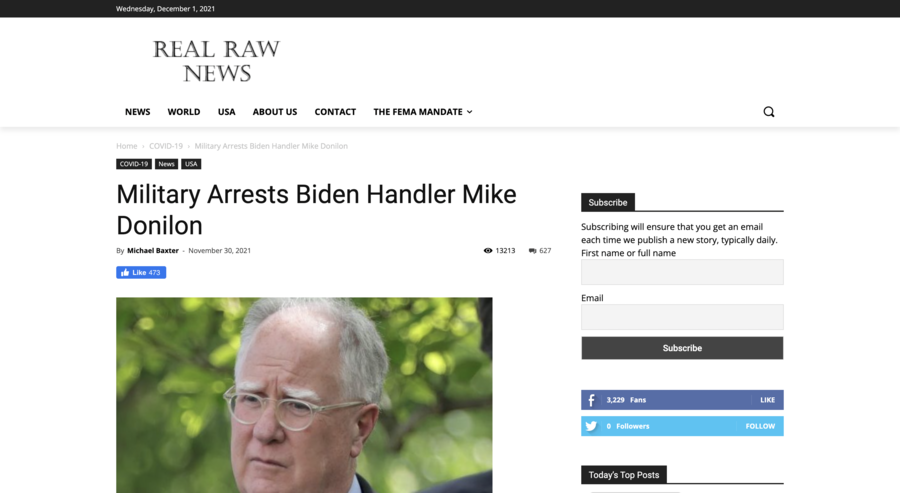 The article continued, "... Donilon was taken into military custody without incident and transported to a processing center from where he will ultimately be sent to Guantanamo Bay."

A press officer for the Pentagon told Lead Stories by email on December 1, 2021, that the claim is false.

A Google search of the phrase "Mike Donilon arrested" results in no coverage from reliable media outlets -- only repeats of the Real Raw News story, often without that site's satire disclaimer.

Real Raw News has a long history of publishing false claims in mock news stories, many of them about convictions and executions of various public figures at Naval Station Guantanamo Bay in Cuba. For example, the site reported former Secretary of State Hillary Clinton was hanged (she wasn't); former White House Chief of Staff John Podesta was executed (he wasn't), and that "the military" convicted former Attorney General William Barr on charges of treason (it didn't).