Does a video show the Michigan school shooter pretending to be a sheriff? No, that's not true: A video taken inside a classroom at Oxford High School on November 30, 2021, shows students refusing to open the door to a person outside, fearful that it was the gunman on a shooting rampage at their school. However, Oakland County Sheriff Michael Bouchard said the person shown in the video was not "the suspect," Ethan Crumbly, who was arrested for the shootings. Bouchard said it may have been "one of our plainclothes detectives."

The claim appeared as a video (archived here) where it was published on Facebook on December 1, 2021. Taken down by December 3, 2021, it opened:

School Shooter pretending to be a Sheriff

This is what the post looked like on Facebook at the time of writing, with the name removed to protect the poster if she is a student there.: 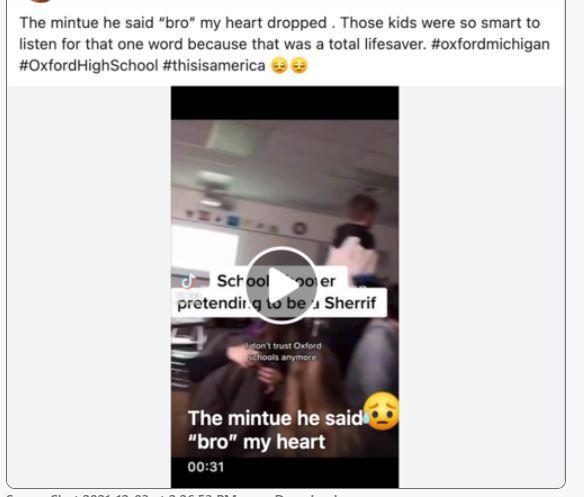 The 30-second video posted on Facebook shows a group of students in a classroom. The chyron on the video reads, "School Shooter pretending to be a Sheriff."

On the video a voice was heard saying, "Sheriff's office. It's safe to come out." The students are quietly speaking to each other and one says, "we don't know that." A different student says, "We're not willing to take that risk right now," and the voice on the other side of the door says, "Well, come to the door and look at my badge, bro." The word "bro" was a "red flag" for the students who did not believe it was a sheriff, and they climbed out of windows in the room to flee. "We're not willing to take that risk right now," one said.

Bouchard said during a December 1, 2021, press conference that they reviewed surveillance footage from the school and it did not show the suspect knocking on any classroom doors. He explained what they believe happened beginning at 1:34:33 in the video posted on YouTube:

Also I want to clear up some of the incorrect information that keeps circulating. Social media keeps ginning up a great deal of false information. A video was disseminated rather widely that showed the students in a classroom and depicted someone knocking on the door and pretty much the allegation was that that was the suspect. We've now been able to determine that was not the suspect. Excuse me, more than likely it was one of our plainclothes detectives and he may have been talking 'bro' in a conversational manner to try to bring them down from the crisis to say, 'Come on bro, let's get out of the classroom. Let's get you outside,' that kind of comment.

The suspect, we have now confirmed by analyzing all of the video from the time it began to the time we took him into custody, never knocked on a door.

The gunman, age 15, is alleged to have shot and killed students Madisyn Baldwin, 17; Tate Myre, 16; Hana St. Juliana, 14 and Justin Shilling, 17. The Oakland County Prosecutor's Office announced the gunman is charged with terrorism, first-degree murder, assault with intent to murder and possession of a firearm.