Is this post a real account of a transgender reassignment for a teenager? No, that's not true: There is no evidence to suggest the content in this post is real. This closely resembles another fabricated story from a Reddit troll farm that posts stories intended to make those on both sides of the political spectrum angry. A text search reveals that the hoax in this post is a recycled version of anti-vaccine and anti-LGBTQIA misinformation efforts across social media.

My son got his 2nd blocker yesterday! YAY!
It was going great until the doctor came in to perform the
procedure. The doctor was amazing, by the way!
My son freaked out after the numbing cream, and after the
numbing medicine was put in with the needle. He got so
scared he refused to have the procedure. Luckily,
Children's Hospital provided a child specialist to stay with
us during the whole procedure. Her job was to calm him,
and distract him.
It took over an hour of negotiation before he let the doctor continue.

I literally bribed him with money! It was the most
stressful hour+! I was so scared he wasn't going to go
through with it, and I just kept thinking of the
consequences if he didn't! The medicine cost $43,000,
plus the cost of the insertion packet. The medicine only
last a few days, once prepared to insert. So, coming back
to put him to sleep for the procedure would be unlikely.
Not sure the insurance would approve it again.
I was so proud of him that he went through with it, and can
not believe how brave he is! The whole way home is was
crying because he was releasing his stress. He kept saying
how it's just not fair that he has to do this..and he's right, it
not!
I really can't explain to my friends, that don't have a trans
child, how stressful this was, so I thought I'd say it here.
Being a parent of a trans child is not the same as just being a parent.

"Parents of Transgender Children" is a private Facebook group, but the image on its page does not match the rainbow colors in the purported screenshot of the profile picture used in the hoax Facebook post where the claim was made.

I didn't block out the name, so I have no idea. It leaked from a private group and the name was blocked out by whoever leaked it.

Ashworth's post also links to the Twitter profile page of "@libsoftiktok," which displays posts that mock those on the left of the political spectrum.

The blurry image of the screenshot on the post, color mismatch and the etched-out name may indicate this post was created by social media online trolls.

A September 10, 2021, Lead Stories fact check on a similar post, but on Reddit, mentioned a Medium article about a group of internet trolls that create content just to make people upset.

Some began their tricks in the subreddit r/Drama before they got banned. Those users then created their own website and moved to rdrama.net. Here is one of the first posts, showing the trolls coordinating to make "parent trying to force their child to transition" into a viral conversation. It was posted on August 6, 2021.

A lolcow is an oblivious user arguing with fabricated drama earnestly. 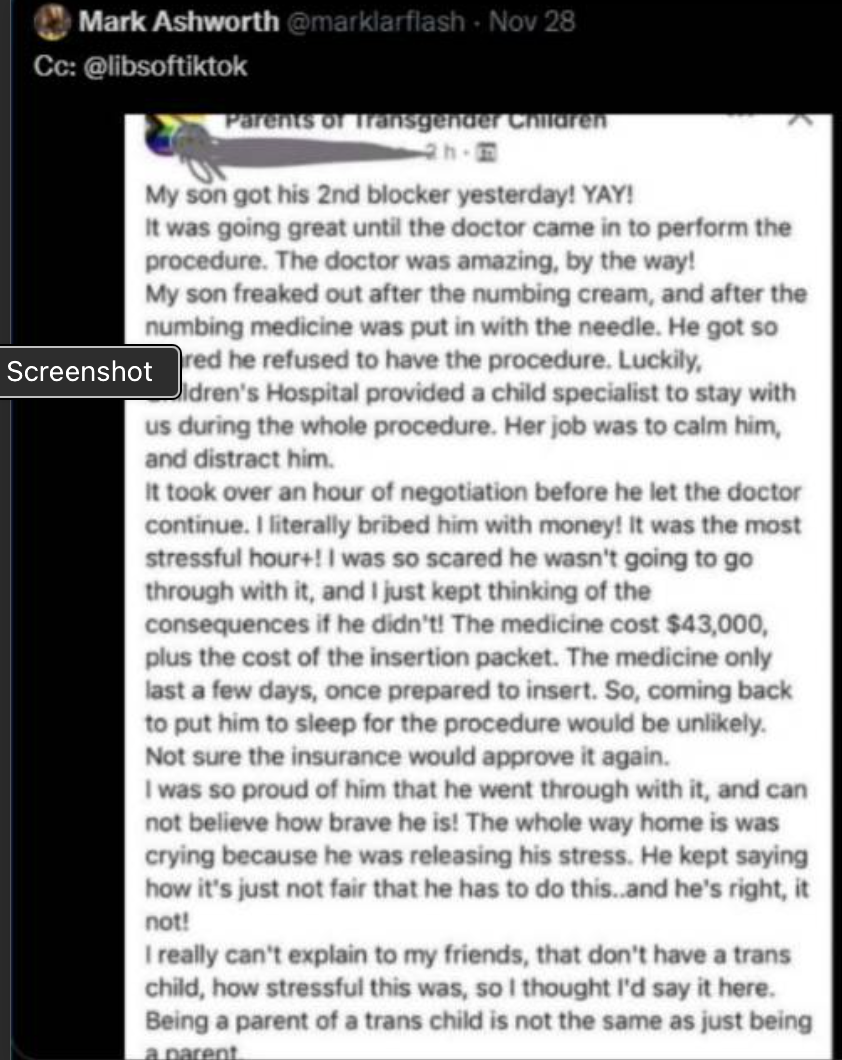 Sub for coronavirus circlejerking, memes, and sharing and discussing stupid, ridiculous, and amusing posts and discussion from the various panic-filled and alarmists across the internet.

This similarly appears in the rhetoric of this Twitter post, which warns of anti-vaccine disinformation and opened:

My son got his second dose today.

A Google search of the same text transcribed from the Facebook post produced a meme with the same image as the post except for the title, now "Munchausen By Proxy." The profile of the person who shared this meme, AlexPKeaton, in part, reads: