Is the relatively high number of registrations on November 2 and November 3, 2020, evidence of voter fraud in Michigan? No, that's not true: On Election Day alone, close to 32,000 people registered to vote in Michigan, according to officials. A spokeswoman for the Michigan secretary of state told Lead Stories that the registrations were legal and due to the fact that 2020 was the first presidential election since Michigan voters passed a proposal that expanded voting rights in the state, including the ability to register to vote up to and on Election Day.

The claim appeared in a Facebook post (archived here) on March 12, 2022. It included video of an old interview with a man identified as Bob Cushman. The post's caption read: 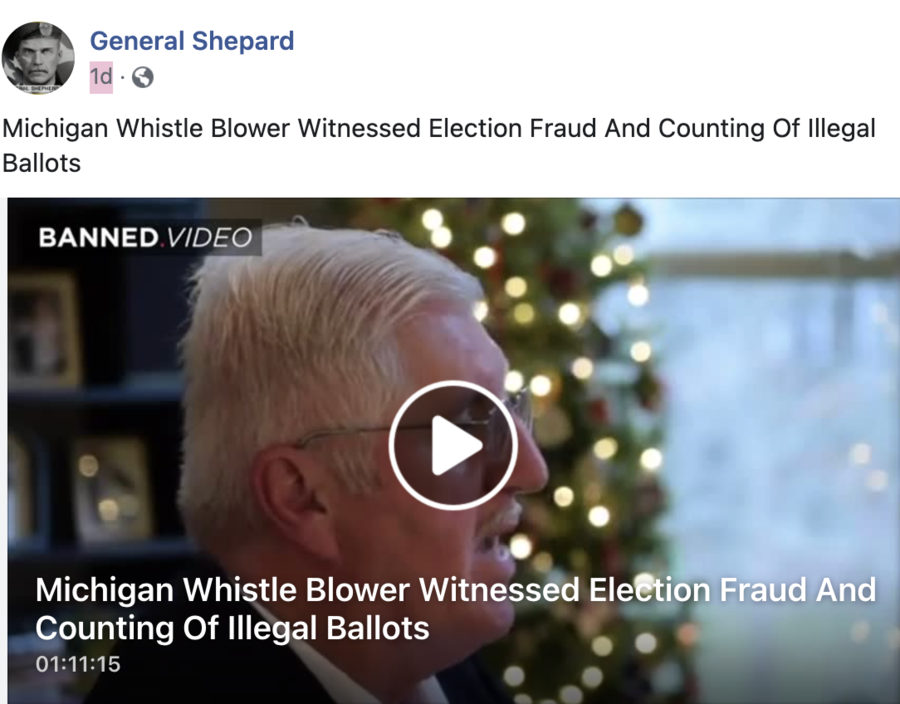 The interview with Cushman, who identifies as a political activist and Republican election challenger, was conducted back in 2020. It was making the rounds again on social media in March 2022.

During the course of the roughly hourlong video, Cushman made a number of unsubstantiated and disproven claims about alleged voter fraud in Michigan. This fact check does not encompass all his allegations. We address just three of the major ones below:

1. Registrations on November 2 and 3 Are Evidence of Voter Fraud

I found it impossible to believe that tens of thousands, and now we think it's 50,000 persons, were registered in just those two short days.

He was referring to the relatively high number of voter registrations that took place on November 2 and November 3, 2020.

Lead Stories reached out to the Michigan secretary of state to ask about his claim and about the number of registrations. Spokeswoman Tracy Wimmer responded in an email, dated March 15, 2022, saying that 31,934 people registered to vote on Election Day, a new record. She did not have the exact figure for November 2.

The relatively high number was due to the fact that 2020 was the first presidential election since 2018, when Michigan voters passed a proposal that expanded voting rights in the state, including the ability to register to vote up to and on Election Day, Wimmer wrote. Of those who registered on Election Day, about a third were between the ages of 18 and 21, meaning they were likely registering for the first time, she added.

2. Late-Night Delivery of Ballots to Detroit Voting Center Is Suspicious

We had been advised of a very large ballot drop at approximately 4 a.m. on November 4th.

He was referring to Detroit's TCF Center.

When asked by the interviewer to clarify, Cushman said that boxes of ballots "magically appeared," implying that there was something untoward or illegal about the delivery. There wasn't.

As Lead Stories has previously reported, the late-night delivery is not proof of fraud. An 8 p.m. Election Day deadline is for casting votes, not counting them. Absentee ballots can arrive at counting boards, such as the TCF Center, after 8 p.m. on Election Day.

The Michigan secretary of state says this on its website about the allegation:

In many larger jurisdictions, absentee ballots that arrived on Election Day were marked as received and put through security checks at clerk offices prior to being brought to absent voter counting boards. If a ballot arrived at a clerk's office at 8 p.m., it may not move through the process and be sent to the counting board for several hours. This is why, in cities including Detroit, ballots arrived at counting boards several hours after polling places had closed.

The Republican-led Oversight Committee of the Michigan State Senate similarly addressed the allegation in its June 2021 report:

Several individuals testified and claimed that tens of thousands of ballots were 'dumped' at the TCF Center on election night, when reported vote tallies showed that President Trump was still in the lead ... These ballots were submitted throughout Election Day at different locations, such as drop boxes, in the mail, and at the clerk's main and satellite offices. After the ballots were compiled and processed at the clerk's office, after the closing of polls at 8 p.m., they were brought to the TFC Center for counting.

In other words, yes, there was a late-night delivery of ballots to the TCF Center, but it was not suspicious nor illegal.

We've already turned up hundreds or thousands of names of people who are apparently dead.

This allegation has been repeatedly debunked. Lead Stories wrote about the claim here, here and here, in which we found that 10,000 dead people did not vote in the presidential election, a list does not show that over 14,000 dead people voted in Wayne County, Michigan, and an old graphic does not show evidence of dead registered voters.

The Senate Oversight Committee addressed the allegation of dead voters in its report, writing:

The Committee researched these claims and concluded that most were false. There were two claims of deceased individuals casting votes that were found to be true; one was a clerical error while the other was a timing issue. The Committee concluded that none of these constituted fraudulent election activities or manipulations.

Although two is not ideal, the actual number of claims is far less than the "hundreds or thousands" that Cushman claimed.