Is sunscreen bad for your skin? And did skin cancer not exist until the 20th century? No, that's not true: Two dermatologists told Lead Stories that sunscreen, chemical or mineral, is not bad for your skin. According to the Center for Disease Control (CDC), skin cancer is caused by too much exposure to ultraviolet rays. And Hippocrates, a Greek physician, first wrote about skin cancer, or melanoma, in the fifth century B.C.E.

🔈WEAR YOUR SUNSCREEN OR YOU WILL GET SKIN CANCER. 🔈 This sentiment has been drilled into our heads since we were little kids. And I know I am going to ruffle some feathers here, but yall know that I share truth, no matter who it may offend. (And I can see all of you amazing people who know the truth) #TheTruthIsGoodEnough 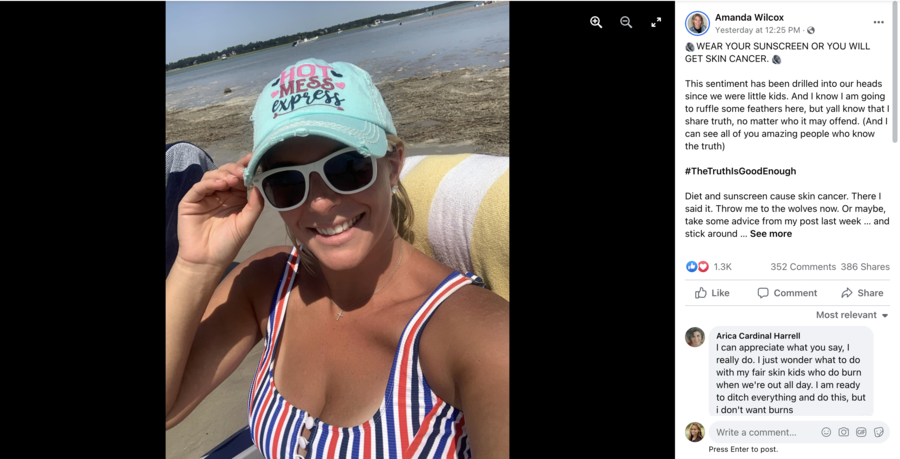 Diet and sunscreen cause skin cancer. There I said it. Throw me to the wolves now. Or maybe, take some advice from my post last week ... and stick around to hear something that you may have never thought of. It might open your eyes.

When did skin cancer start emerging? In the 20th century. Don't you think it's a little odd that our ancestors lived for centuries mainly OUTDOORS, WITHOUT sunscreen and no one ever got skin cancer?

What emerged in the mid 1900's? The Standard American Diet. Processed foods, low in nutritional value, foods that are chemicals, not actual foods. All sorts of diseases we had never seen before went on the rise.

For time sake, I am only chatting sun / skin cancer on this particular post.

Baylor University did a study back in the 80's (or so) that split mice into two groups. One was fed a Standard American Diet and the other was fed a diet rich in nutrients and antioxidants. Then they exposed both of these groups to the UV rays of the sun. 25% of the Standard American Diet mice developed skin cancer. ZERO mice that were fed a nutritious, antioxidant rich diet developed skin cancer. More studies have been done since then, as well. All pointing to diet being the best way to combat skin cancer.

Sunscreen has also been proven to bake chemicals INTO the skin, causing cancer. A lot of them have been recalled. But that is a story for another day.

If you are going to use sunscreen, make sure it's mineral based.

An article in the journal Melonoma Research titled, "A Brief History of Melanoma: From Mummies to Mutations," dates the first key event in melanoma history at around 5 B.C.E. with Hippocrates writing about what is now known as melanoma (according to the article, a word derived from the Greek melas, "dark" and oma "tumor"). In 1804, René Laennec, a French physician, first described melanoma as a distinct disease in Paris and coined the term melanose, according to the article.

Lead Stories spoke to Dr. Joshua Zeichner, the director of cosmetic and clinical research in dermatology at Mount Sinai Hospital, about this claim. He emailed us on March 23, 2022:

Sunscreens are considered OTC drugs and are regulated by the FDA [Food and Drug Administration]. The current FDA sunscreen monograph considers products that comply with the regulations to be safe and effective. There is a proposal to amend this monograph and change the way that sunscreen ingredients are classified. Under the new proposal, which has not yet been adopted, only zinc oxide and titanium dioxide will be considered to be GRASE, or generally recognized as safe and effective. Many of the other ingredients used in sunscreens will need more evaluation before being given the GRASE classification.

He said he was not aware of any data showing that a poor diet is specifically related to the development of skin cancer, but he recommends a well-balanced diet to provide the body with the building blocks needed to protect it from environmental aggressors.

Sunscreen does not bake chemicals into the skin. That is false.

Chemical sunscreens absorb the suns rays and generate heat to absorb and lessen the effects of the radiation rays of the sun on the skin.

Mineral based sunscreens are like invisible armour on the skin. They reflect the sun's radiation when it hits the skin.

Skin cancer is caused by too much exposure to ultraviolet (UV) rays, the Centers for Disease Control and Prevention (CDC) says. To decrease the risk of getting skin cancer, the CDC recommends protecting your skin from UV rays from the sun and from artificial sources, like tanning beds and sunlamps.

Lead Stories reached out to Baylor University to ask about the study mentioned in the post. We will update this story if we receive a response.