Is it true that "not one real video has surfaced" from the 2022 Russia-Ukraine conflict? No, that's not true: There is an abundance of footage showing the Russian invasion of Ukraine.

The claim appeared in a Facebook post on May 20, 2022. The post, which contained several claims and featured images of figures from the Dow Jones Industrial Average (DJIA) index, reads:

5k points down in a month. 2k this week. Greatest weekly loss since 1923 and we are worried about a fake war in ukraine. All these smart phones and not one real video has surfaced from this "war". No baby formula for our citizens but ship pallets to the border for illegals. The only war is on American citizens.

Although the post makes claims about the DJIA, baby formula and immigrants in the U.S., this fact check will only address the "fake war in ukraine" and "not one real video" claims in the post. 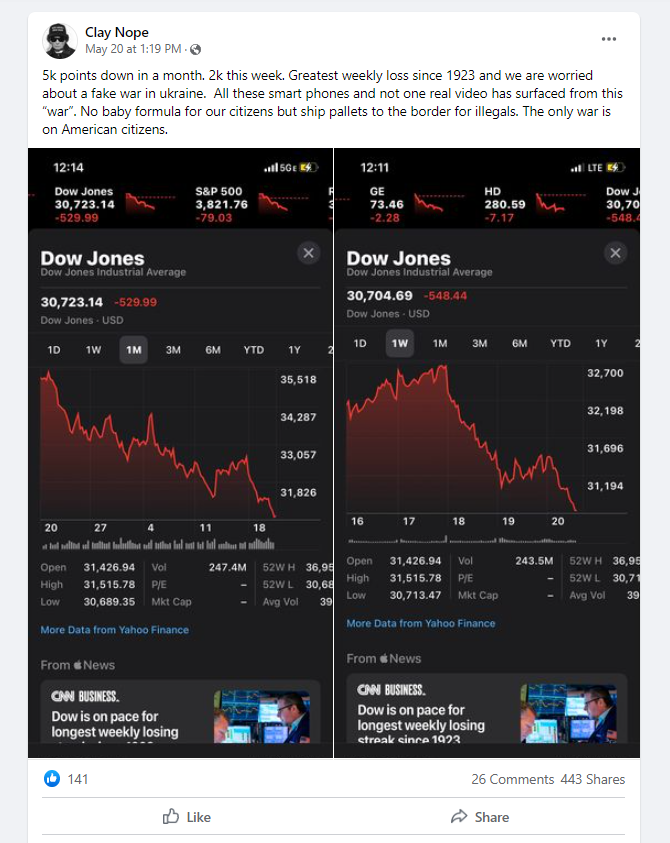 The 2022 Russia-Ukraine war is not fake. Russian President Vladimir Putin announced a "special military operation" in Ukraine on February 24, 2022. This operation was quickly interpreted as an act of war by leaders of international alliance organizations such as the United Nations and NATO. International media organizations such as BBC News, Al Jazeera and CNN have also provided detailed coverage of the conflict since it began.

There is also no evidence to support the post's claim that "not one real video has surfaced" from the war. Although Lead Stories has debunked several videos claiming to be related to the Russia-Ukraine conflict, there is plenty of footage from the war that is legitimate. For example, The Washington Post has created a database of verified videos from various sources -- including videos from what appear to be civilians using smartphones -- that show the war, and The New York Times has a dedicated visual investigations team to determine the authenticity of videos and images purportedly showing the war.

Though on opposing sides, both Putin and Ukrainian President Volodymyr Zelenskyy have discussed the war on-camera since it began. Additionally, image platforms such as Getty Images and AP Images have published numerous photos of the war.