Did the Canadian sniper known by the pseudonym Wali claim that a fraudulent scheme was organized in Ukraine to steal U.S. military aid? No, that's not true: In a conversation with a journalist from the Canadian edition of La Presse, which the authors of the claim refer to, Wali does not say a word about theft. The number of virtually identical social media posts may indicate they are part of a Russian propaganda campaign.

Variations of the statement appeared on Facebook on May 7 to May 8, 2022, in posts from several accounts and in several languages ​​at once, including English, Spanish, Russian, Burmese, French and Bulgarian. One post was published on May 8, 2022, on the Facebook page Military Cognizance. The post stated:

🇨🇦Canadian sniper Vali, praised by ukropropaganda, has escaped home and is giving interviews to the Canadian media
with might and main points.:
- this war is a complete deception;
- most of the mercenaries returned without ever having been to the front;
- the AFU command did not know what to do with the mercenaries;
- many have deserted;
- weapons and food were not given out, we had to look for everything ourselves;
- a fraudulent scheme to steal US financial aid has been organized in Ukraine;
- a small part of the mercenaries were selected by the GUR for sabotage activities in the rear of the Russian troops.
(Source)
https://www.lapresse.ca/.../la-guerre-c-est-une-deception...

As a source in the post, there is a link to an article by the Canadian edition of La Presse. The article was titled "La guerre, c'est une déception terrible" ("War is a terrible disappointment"). 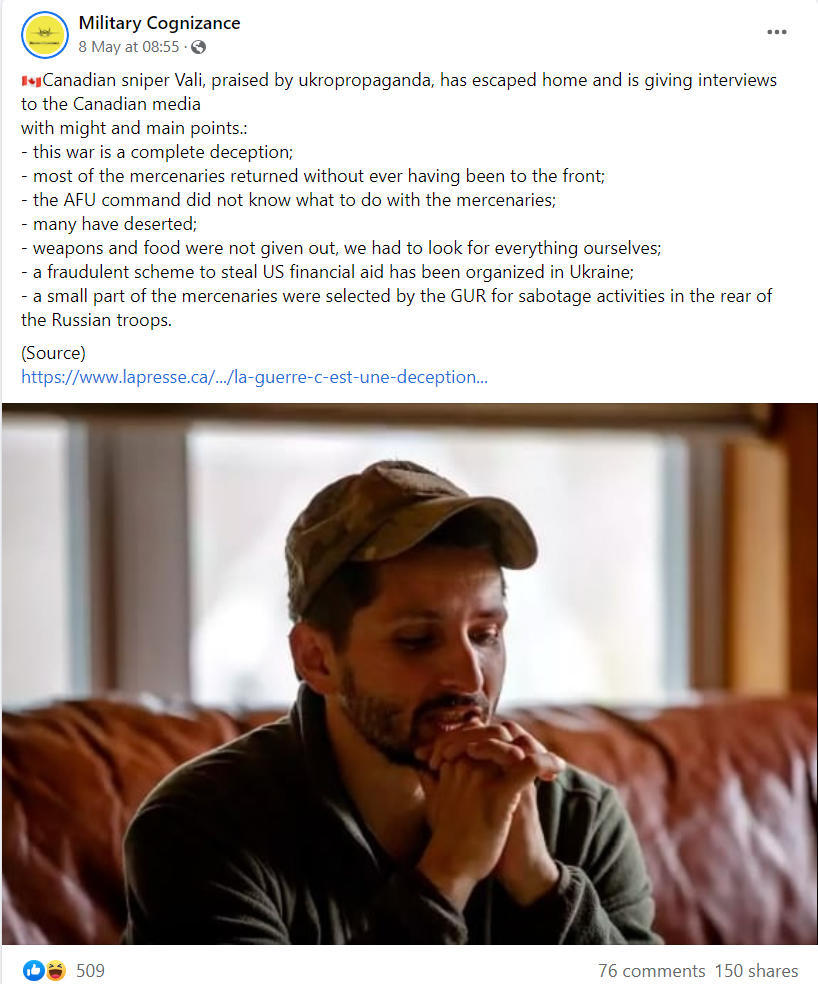 Some of the claims in the post were exaggerated versions of what the article reported, or were not in the article at all. Many words in the post were taken from the lexicon of Russian propaganda. For example, the Kremlin calls volunteers who came to Ukraine to fight against Russian invaders "mercenaries." The Military Cognizance post also used the word, although it is not in the La Presse article.

Military Cognizance also wrote that "a fraudulent scheme to steal US financial aid has been organized in Ukraine." There is no such statement in the article on the lapresse.ca website or in its archived versions.

The La Presse article contains the word "magouille," which can be translated as "scheming." The author, journalist Tristan Péloquin, uses it to retell what the commander of the Norman Volunteer Brigade, who uses the alias Hrulf, told him: Some brigade members planned to take the weapons sent to the brigade from the United States in order to create a separate combat unit.

The article, translated from French to English using Google Translate, then continues:

The commander of the Norman Brigade, who also asked us to withhold his real name for security reasons, confirms that he has been abandoned by around sixty combatants since the start of the conflict. Several of them wanted to sign a contract that would have given them status under the Geneva Conventions, as well as guarantees that they would be treated by the Ukrainian state in the event of injury. Hrulf claims that some even 'schemed' to strip him of a $500,000 shipment of arms supplied by Americans, in order to create their own combat unit.

These are Péloquin's words, not Wali's. In an email sent to Lead Stories on May 13, 2022, Péloquin clarified that the weapons in question were $500,000 worth donated specifically to the Norman brigade.

The first claim in the Military Cognizance post is that Wali insinuated that the war was "a complete deception." Péloquin noted in his email to Lead Stories:

Although he said he was 'rather disappointed' with the way the foreign fighter are being used by the Ukrainian government, Wali didn't say that the Ukrainian war is a complete deception. What he said is that, in general, 'war is a terrible deception' for those who expect it to be a turnkey experience. 'It's terrible. And it's deceiving.'

The context of Wali's words is that the fighters did not get everything they needed on a turnkey basis. To get a machine gun, food or gasoline, they had to know someone who knew where everything was, and to ask. And most of the volunteers had not yet received tasks at all so they were sitting in rented housing and waiting for a unit to call them to the front.

On May 7 to May 8, 2022, there were different Facebook posts about Wali's alleged words that referred to the La Presse article. Lead Stories checked these posts individually.