Are governments waging biological war via monkeypox? No, that's not true: There's zero evidence monkeypox virus, the virus that causes monkeypox, is being used by governments to cause disease. Monkeypox was first identified in humans in 1970.

The claim appeared in a Facebook post (archived here) by RED PILL USA 17 on May 22, 2022. The post includes a short video. Text overlaid on the video reads:

Its a Bio war against us by our governments !! 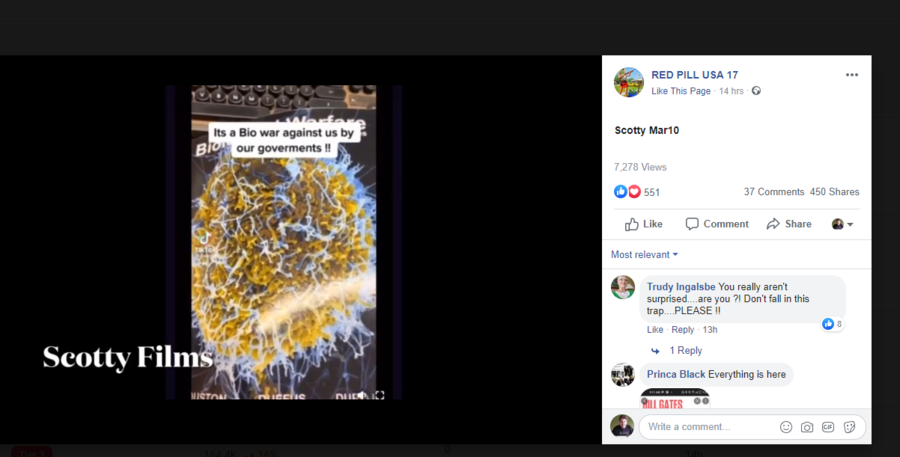 In the video, a person shows two books. The first book is entitled "Biological Warfare: Pathogen Perspectives;" the second is called "Handbook of Chemical and Biological Warfare Agents." A voice says:

The person opens to a page about monkeypox and continues:

No, no, it can't be. No. Let's double-check it in the 'Handbook of Chemical and Biological Warfare Agents.' Let's have a look, folks. What have we got here?

Again, opening the book to a page devoted to monkeypox, the voice says in mock surprise: "No."

The implication is that monkeypox is being used as a biological weapon because it's included in books about biological warfare. It's not. Reportedly monkeypox virus could be weaponized, but there's no evidence governments are doing so in order to cause disease in humans.

The voice in the video claims:

Folks, this is a war on us by them. Do not comply. Do not fall into yet another trap.

Beyond its references to the books, the video offers no support for its claim. The books themselves, seen here and here, do not say that governments are waging biological war via monkeypox.

In fact, the first book, "Biological Warfare: Pathogen Perspectives," which categorizes biological threats based on their potential risk, puts monkeypox in Category C, the lowest threat level (see page 18). The book puts dengue fever in the same category, while threats like smallpox, anthrax, botulism and the plague are put in Category A, representing the highest risk.

Monkeypox is typically found in the tropical rainforest areas of central and south Africa. It occasionally pops up in other parts of the world, including the United States.

The disease has made headlines recently. Scientists at the U.S. Centers for Disease Control and Prevention (CDC) say they are working with the Massachusetts Department of Public Health to investigate the case of a U.S. resident who tested positive for monkeypox on May 18, 2022. The CDC is also looking into clusters of monkeypox that have been reported in places that don't normally report monkeypox, including in Europe.