Did 58 percent of sudden infant death syndrome (SIDS) cases reported to the Vaccine Adverse Event Reporting System (VAERS) happen within three days of vaccination and 78.3 percent within seven days? No, that's not true: Since the VAERS system began in 1990, the public database shows 1,066 reports of SIDS deaths. Of that total, 527 or 49.4 percent occurred within three days of vaccination and 689 or 64.6 percent within seven days. These vaccinations don't include the COVID-19 shot, which is only approved for those 5 and above.

What's missing in these numbers is the fact that SIDS is very rare. Over the last 32 years, roughly 4 million children have been born annually in the United States, or more than 120 million since VAERS began. While the 1,066 deaths of the babies are no less tragic to their families, their numbers are a tiny fraction of overall births. Childhood immunizations have been commonplace over those years. Nearly all SIDS deaths happen by the age of 1.

The claim appeared in an Instagram post published on June 8, 2022, under the title "Don't let them convince you 'Sudden Adult Death Syndrome' is normal and healthy adults just die in their sleep for no reason ... You're smarter than that." The caption reads:

... and on that note, don't let them convince you SIDS is normal either.

It's not normal for healthy adults to die in their sleep for no known cause either. Don't let them condition you into believing differently.

And PS: remember to turn you WiFi off, put your phone on airplane mode, and leave it in another room while you sleep because the ✋🏻G isn't helping either.

Share as a reminder to your friends and family. 💜

PSS: Last thought - isn't it rediculous that I have to communicate is such a way, in 2022, in the Untied States of America?! 😭🤯 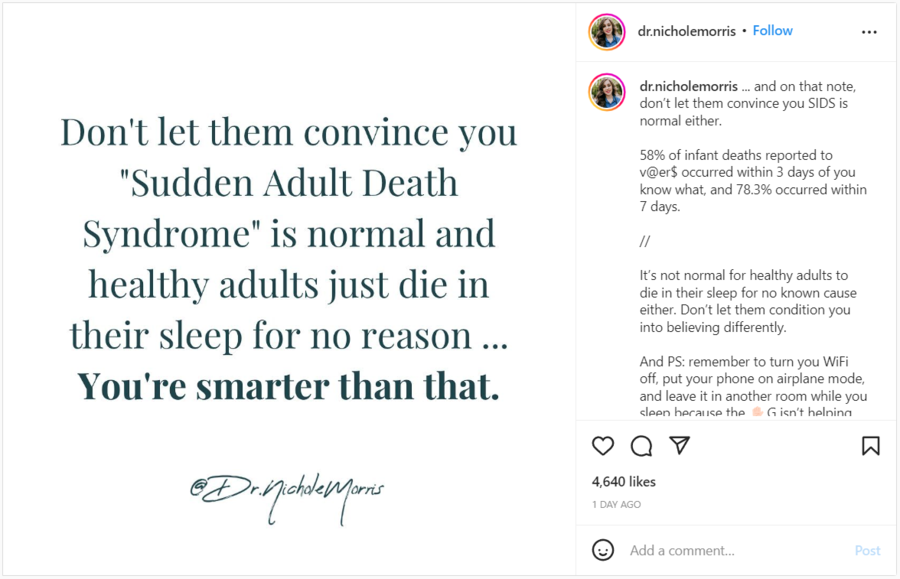 The Instagram post by Nichole Morris, a naturopathic physician, opens with a claim about sudden adult death syndrome (SADS), which won't be addressed in this fact check but is not considered "normal" by the medical community.

By putting her discussion of SIDS in the description section of the post, Morris may have been trying to camouflage it. She substituted "[email protected]$" for VAERS and the expression "you know what" for "vaccination" to avoid triggering possible fact checks on those words. Morris continued to use symbols throughout her post, including a hand with five fingers, "✋🏻G," for "5G." She closed with:

Last thought - isn't it rediculous that I have to communicate is such a way, in 2022, in the Untied States of America?! 😭🤯

Lead Stories' search of VAERS data for all SIDS death cases produced 1,066 results. The results for the "total events" (within yellow rectangle) are listed below, along with many of the vaccines included in the reports: 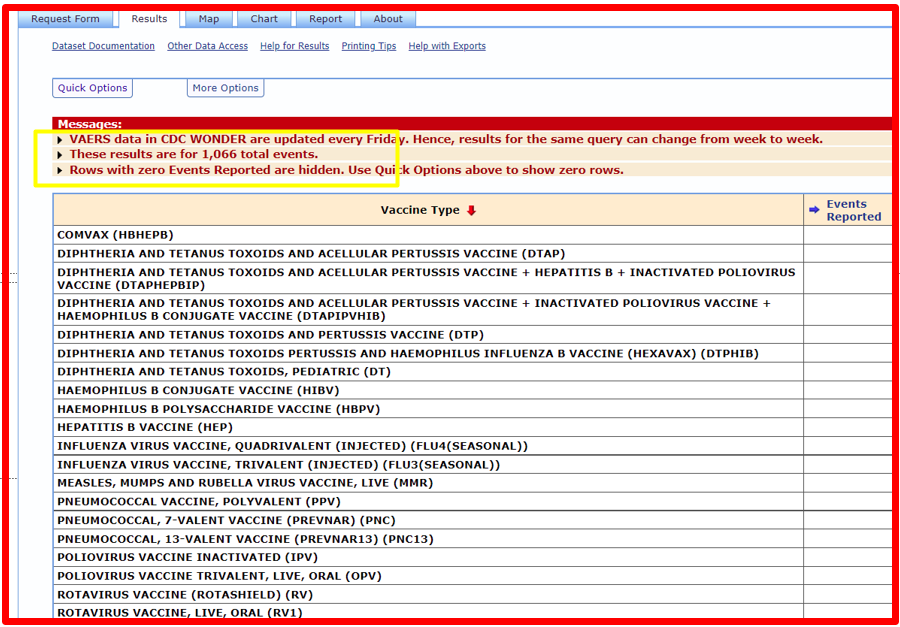 A fine-tuning of the VAERS search found 527 or 49.4 percent of those reported SIDS deaths occurred within three days of vaccination and 689 or 64.6 percent of them happened within seven days.

The list itself cannot be used to prove or quantify, since all it shows is a chronological correlation, not the causal link that would be more difficult to establish. It's the equivalent of a police precinct's running "blotter" reports that may serve as a starting point for police work, not an endpoint.

Lead Stories has also debunked stories that say 5G and Wi-Fi cause health problems in humans and that 5G and Bluetooth stimulate nanotechnology in COVID vaccines. There is no proof of nanotech in COVID shots.