Was this an actual child mermaid who cried in distress with the voice of a pig, reeled in or washed up on a beach in Africa, amazing onlookers who poked and videoed the half-human half-fish creature without trying to help? No, that's not true: This video is a creative work of fiction: a mix of acting, artful makeup, costuming and puppetry. Officials in both Kenya and South Africa, two places named as the location where this was filmed, have declared the video a hoax.

According to an earlier fact check from snopes.com (here) the video appeared first on the TikTok channel @aamircali on April 6, 2022, titled, "Real Mermaid Caught in Muizenberg South Africa" That copy of the video has been removed, but the @aamircali channel was regularly posting videos featuring mermaids at that time. Another copy of the video was posted on YouTube on April 7, 2022, with the same title. The video is over two minutes long. It has been copied and reposted many times with people adding their own commentary. One example of that is a five-minute-long video posted on Facebook Watch by Ryna Channel on June 8, 2022. It was titled and captioned:

What do you think?? Real mermaid found in africa!

If this is real please put it back into the water !!

The 2:31 copy of the video on YouTube has a rather quiet audio track, with only the sound of the onlookers quietly talking, the wind and waves of the beach and occasionally some loud pig-like grunting. The grunting audio seems overdubbed as the levels do not match the beach sounds. Although it's implied that the sound is coming from the mermaid, it is not connected with any expressions or breathing movements of the mermaid. The grunting audio looks and sounds fake.

If viewing the video in HD on YouTube, it is possible to see the strings and the shadows of the strings (here and here) that are attached to the fins and tail of what appears to be a large, dead, headless leervis fish. There are some moments in the video where a bystander's shadow (here and here) shows movements of a puppeteer (there may be more than one) holding a string that is not visible. Below is a composite image (it will open larger in a new window) of screenshot details at key moments where hints of puppetry are visible in the video. Lead Stories lightened some of the screenshots for clarity and added the arrows, but the photos are otherwise unedited. 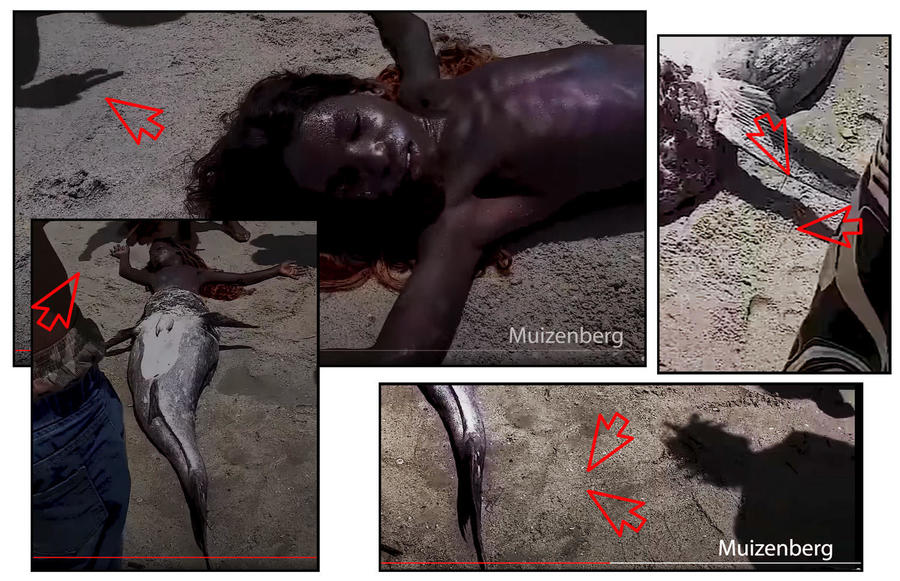 This copy of the video on Ryna Channel on Facebook does not contain five minutes of unique footage; the 2½ minutes of footage loops twice with a woman's voice dubbed over the original soundtrack. She says:

How can you still believe that mermaids are not real? This mermaid was found in South Africa. Look at the scales, look at the shimmer on the body. Look at this. It says that the angels went into the fish in the book of [inaudible] started gene splicing. If you look at this carefully there is a shimmer like a fish over this being's body. And look at the fins you can even see when they go down by the feet or by the bottom of the flipper that there is a space for this being to give birth. Like you can see the spine. Those look like scales on the face, exactly how they described the mermaids to us. Look at this y'all. They are touching it. There's flies all over it and you can hear it grunting. But there is a purplish hue, a purplish blue hue to the skin, the hair is colored exactly like they told us mermaids were, and you can look and tell that that is not something that is fabricated. That being is dying because it's out of water. Y'all, mermaids are real. Sirens are real. This is real.

Some of the copies of the video, such as this one posted on YouTube April 7, 2022, claim that it originated in Kenya. The video was titled, "See A Real Mermaid Caught In The Kenyan South Coast {Diani Beach Ukunda Kenya}." The grunting and beach audio was swapped for some mellow background music.

Reports of alleged mermaid spotted in Ukunda, that are circulating on social media are fake Coast Regional Commissioner and Kwale County Commander have dismissed videos as lies

Reports indicating that a mermaid has been spotted in Kwale are fake, police say pic.twitter.com/H6RVpxrd45

Snopes.com relayed a statement from a spokesperson for the Muizenberg South African Police Service:

Please note that Muizenberg SAPS has no reports of a mermaid that was washed by the beach nor reports of a child bitten by a fish.