Is there evidence that millimeter waves from 5G, the fifth generation of wireless networks, cause health problems in humans? No, that's not true: Although some researchers have expressed reservations regarding the rollout of 5G, many health agencies have determined that 5G technology does not present any known risks for the general public.

Such claims appeared in a video (archived here) posted to Facebook on December 5, 2021. The video was a 2019 report from NTD News that covered the Wireless Technology Symposium in Toronto. The symposium, hosted by the nonprofit Canadians For Safe Technology, featured researchers who expressed uncertainty about 5G millimeter waves. The report opened:

5G fifth-generation technology promises faster download speeds and conveniences that most of us have never dreamed of. But we'll also be blanketed with a new type of radiation called 'millimeter waves.' Health experts are warning about the rising risks with a 5G rollout.

The report featured several claims about health concerns associated with 5G millimeter waves, some of which will be examined in this fact check.

Claim: The public will be "blanketed" with "a new type of radiation called 'millimeter waves'"

Facts: As shown above, this claim was in the lead-in of the report and began at the 0:08 mark. The claim's implication that radiation is inherently harmful through the choice of the word "blanketed" is unfounded. The electromagnetic spectrum, displayed below in a graphic from the National Cancer Institute, is a representation of electromagnetic radiation, or electromagnetic waves. There are two main groups of radiation: non-ionizing radiation, which does not contain enough energy to eliminate electrons from atoms and molecules, and ionizing radiation, which is high energy and eliminates electrons from atoms and molecules. 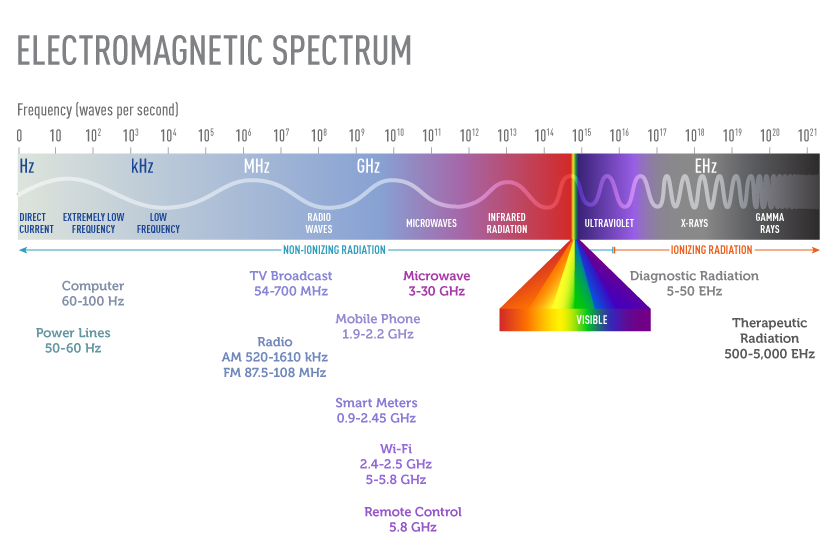 When it comes to wireless networks, 5G is the only generation that uses millimeter waves. The National Toxicology Program (NTP), which is part of the U.S. Department of Health and Human Services, has explained that millimeter waves are a defining feature of 5G that assist with its speed and reliability:

The higher frequencies, known as millimeter waves, can rapidly transmit enormous amounts of data with increased network capacity compared with current technologies. Millimeter waves do not travel as far and do not penetrate the body as deeply as do the wavelengths of the lower frequencies. Since these millimeter waves are likely to penetrate no deeper than the skin, there is less concern that these frequencies can cause harmful effects in the heart and brain. However, scientists do not know if millimeter waves may cause toxicity in the skin and other human tissues. Since the NTP's studies have demonstrated that there is some interaction between RFR exposure at the tested frequencies and cancers of certain tissues, there is a need to understand the interaction between RFR and biological tissues and the factors that affect that interaction.

So, while more research is needed to determine the effects of RFR exposure at varying frequencies on the body, no evidence directly points to 5G as a harmful source of radiation.

These two fact checks (here and here) from Lead Stories also discuss the relationship between 5G and millimeter waves.

Claim: Symptoms of emerging wireless radiation include "headache, fatigue, decreased ability to concentrate, tinnitus, irritability and insomnia," along with effects on the nervous system and the heart

Facts: This claim was made beginning at the 0:55 mark by Riina Bray, an environmental health consultant who was a speaker at the symposium. However, the World Health Organization published a resource that says otherwise. In response to the question "What are the potential health risks of 5G?" the resource states:

To date, and after much research performed, no adverse health effect has been causally linked with exposure to wireless technologies. Health-related conclusions are drawn from studies performed across the entire radio spectrum but, so far, only a few studies have been carried out at the frequencies to be used by 5G.

As the frequency increases, there is less penetration into the body tissues and absorption of the energy becomes more confined to the surface of the body (skin and eye). Provided that the overall exposure remains below international guidelines, no consequences for public health are anticipated.

Similarly, the U.S. Food and Drug Administration has determined that there are "no new implications for 5G" and the Canadian government has stated that based on the available evidence, "there are no health risks from exposure to the low levels of radiofrequency EMF which people are exposed to from cell phones, cell phone towers, antennas and 5G devices."

Claim: At high intensities, millimeter waves "cause intense heat and pain because sweat glands on the surface of our skin act like mini antennas"

Facts: This claim was made beginning at the 1:45 mark by the unnamed reporter covering the symposium. The reporter cited Magda Havas, a researcher who spoke at the symposium, as the speaker who made the claim. As the World Health Organization resource above stated (linked again here), international guidelines (example here) are meant to protect the public from such high-intensity, harmful exposure to any RFR, including 5G millimeter waves.

Claim: "Radiation from radio frequencies is classed in the same category of carcinogens as a lead"

Facts: This claim was made by the unnamed reporter at the 2:09 mark. Radiofrequency electromagnetic fields and lead are both agents classified in the same category of carcinogenic hazards to humans by the International Agency for Research on Cancer (IARC). However, according to the IARC, a Group 2B classification means that an agent is "possibly carcinogenic to humans" and reads in part:

This category generally applies when only one of the following evaluations has been made by the Working Group:

Lead Stories published a fact check in 2020 explaining that there is no proof that 5G causes cancer in humans.

Lead Stories has previously debunked numerous claims about 5G. Some of our most recent 5G-related fact checks are found here, here, here, here and here.