Did Kentucky legislation require women to submit a doctor's statement about whether they are pregnant? No, that's not true: An amendment in 2019 to an abortion "trigger bill" that would outlaw abortion in Kentucky was proposed as a protest. The amendment was "totally satire," said state Rep. Mary Lou Marzian in 2022. It did not become law.

Surely this is really not true right???? 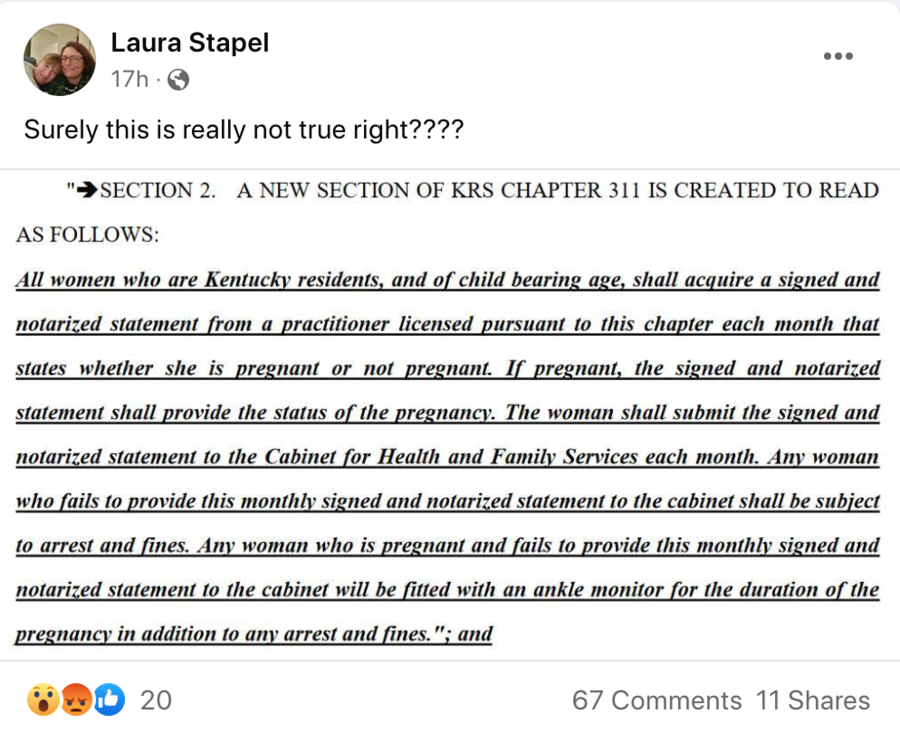 The post shows what appears to be a copy of an amendment proposed by Marzian, a Democrat. It reads:

Marzian proposed this amendment to Kentucky House Bill 148 in February 2019 as a protest against the legislature's "trigger bill" that would restrict or ban abortion if Roe v. Wade was overturned by the U.S. Supreme Court, as news outlets reported at the time. The Courier-Journal wrote:

That's what a Louisville lawmaker is proposing out of frustration with a flurry of bills in the current legislative session meant to restrict or eliminate abortion in Kentucky.
'It's so arrogant of a bunch of legislators,' said Rep. Mary Lou Marzian, a Louisville Democrat and supporter of abortion rights. 'It's none of our business, to interfere in personal and private decisions of women.'

Marzian told the Associated Press on June 27, 2022, that the proposed legislation was ironically filed:

'Totally satire,' Marzian told The Associated Press by phone. 'It was an amendment, it was never heard in committee, I had no intention of ever moving it.'
Marzian, who supports abortion rights, said she has filed several measures over the years that were satirical in nature and designed to make her political opponents look like 'morons.'

Lead Stories reached out to Marzian and will update the story when a response is received.