Did a 15-year-old school kid from Minnesota get an A+ for writing a poem, "New School Prayer"? No, there is no evidence that is true: This poem has been circulating for decades with some revisions. There is no record of a grade given, no link to Minnesota or a traceable attribution to the original poet or their age at the time of writing. Lead Stories located an early version of the poem in a 1964 record of a U.S. House Judiciary Committee hearing on school prayers. The poem was entered into the record at the request of Maryland Rep. George H. Fallon on behalf of The American Legion, department of Maryland.

The earliest copy of the poem Lead Stories has found appears on page 287 in the 1964 book, "School Prayers: Hearings Before the United States House Committee on the Judiciary, Eighty-Eighth Congress, Second Session, Parts 1-2." Over the past 58 years the poem has undergone some changes and has been republished in various formats with several different attributions. It resurfaced on Facebook in 2022. One example was shared on June 7, 2022. The introduction to the poem, which is part of the copy/paste post, reads:

BY A 15-year-old SCHOOL KID who got an A+ for this entry:
The Lord's Prayer Is not allowed in most US Public schools any more.
A kid in Minnesota, wrote the following 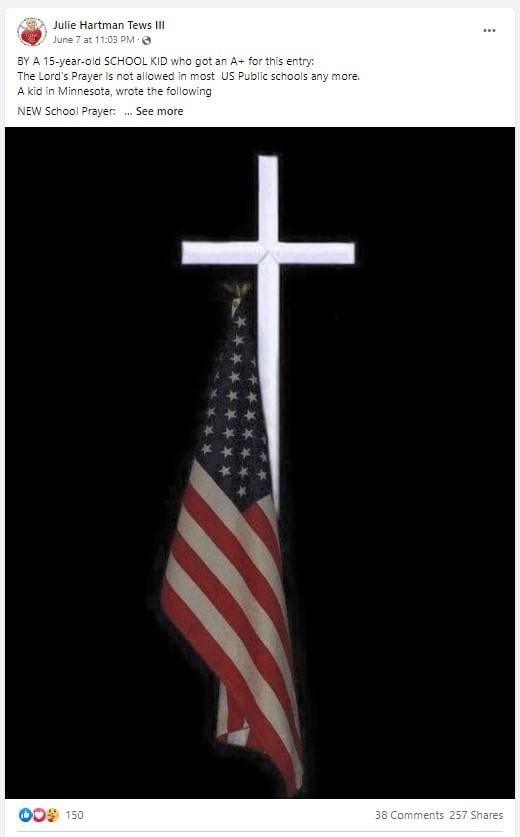 The focus on this fact check is not the poem itself, but the misleading statements in the introduction -- the false attribution of the poem to a 15-year-old student from Minnesota, as well as the assertion that the Lord's Prayer is not allowed in most U.S. public schools.
Snopes published a fact check titled, "The New School Prayer" on September 13, 2007. This fact check includes four earlier editions of the poem and that had been attributed to:

... 'a child in Boston,' 'a 12-year-old girl in Boston,' and 'a teen in Baghdad, Arizona.' Additionally, some versions also lay claim to a date of origin: 'This was written by a teen in Bagdad, Arizona, in January of 2000, and posted on a public bulletin board.'

The earliest version Snopes included was 10 lines attributed to an anonymous student and published in 1992 in the Washington Times. In that 1992 version the poem ends with:

So all I ask is a minute of quiet,
And if I feel like praying, then maybe I'll try it;
If not, O Lord, one plea I make:
If knifed in school, my soul You'll take.

The body of the poem currently circulating has 32 lines:

NEW School Prayer:
Now I sit me down in school
Where praying is against the rule
For this great nation under God
Finds mention of Him very odd.
If scripture now the class recites,
It violates the Bill of Rights.
And anytime my head I bow
Becomes a Federal matter now.
Our hair can be purple, orange or green,
That's no offense; it's a freedom scene..
The law is specific, the law is precise.
Prayers spoken aloud are a serious vice.
For praying in a public hall
Might offend someone with no faith at all..
In silence alone we must meditate,
God's name is prohibited by the State..
We're allowed to cuss and dress like freaks,
And pierce our noses, tongues and cheeks...
They've outlawed guns, but FIRST the Bible.
To quote the Good Book makes me liable.
We can elect a pregnant Senior Queen,
And the 'unwed daddy,' our Senior King.
It's 'inappropriate' to teach right from wrong,
We're taught that such 'judgments' do not belong..
We can get our condoms and birth controls,
Study witchcraft, vampires and totem poles...
But the Ten Commandments are not allowed,
No word of God must reach this crowd.
It's scary here I must confess,
When chaos reigns the school's a mess.
So, Lord, this silent plea I make:
Should I be shot; My soul please take!
Amen

Lead Stories found a copy of the poem archived in Google Books, in a record of proceedings that took place over 18 days between April 22 and June 3, 1964. The book is titled "School Prayers: Hearings Before the United States House Committee on the Judiciary, Eighty-Eighth Congress, Second Session, Parts 1-2." The 24-line poem appears on page 287 (embedded below). The context is on page 285 -- the Maryland Rep. George H. Fallon read his statement in which he informed the committee that he had received over 42,000 signatures protesting the action of the Supreme Court (this would be the 1962 decision in Engel v. Vitale). Fallon asked permission to include for the record, a letter and a poem he had received from the American Legion of Baltimore. In the editor's note after the poem, it is explained that the poem was found posted on a bulletin board of the West Virginia Paper and Pulp Co. in Luke, West Virginia, near Westernport, Maryland and that an unsuccessful effort had been made to find the author. 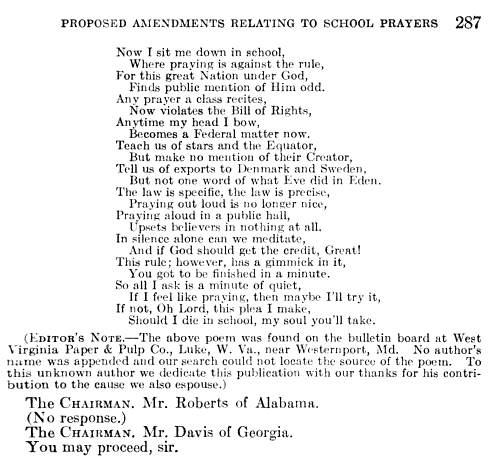 The introduction in this copy-and-paste poem puts forth the false idea that "The Lord's Prayer Is not allowed in most US Public schools any more." This is not the case. A 2019 survey of American teens published by the Pew Research Center found that students commonly used their First Amendment right to free exercise of religion in public schools. Since the 1962 Engel v. Vitale Supreme Court decision, prayer is allowed in schools; what is not allowed is school-sponsored prayer. This is outlined in paragraph eight:

... it is no part of the business of government to compose official prayers for any group of the American people to recite as a part of a religious program carried on by government.

Lead Stories has published a fact check about a meme that encouraged people to post the Lord's Prayer to protest a nonexistent Facebook policy. This meme construction was similar to another, which said the same of the Pledge of Allegiance.