Did Americans keep "100%" of their earnings up until 1913? Not exactly: While the 16th Amendment, which taxed individual income, was ratified in 1913, some higher-earning Americans paid income taxes between 1862 and 1872 to pay off the cost of the Civil War to the U.S. government. A tax expert with whom Lead Stories spoke listed additional pre-1913 taxes that also affected Americans.

The claim about American income-earners living tax-free before 1913 appeared in a Facebook reel published on September 29, 2022. The caption opened:

Up to 1913 American's kept 100% of their earnings. #income #incometax #taxationistheft

The text over a video that is described as "New York 1900" reads:

DESPITE THIS, AMERICA STILL HAD SCHOOLS, COLLEGES, ROADS,

STREETS, AN ARMY, NAVY, AND A MARINE CORPS,

WHO MANAGED TO WIN 8 WARS. 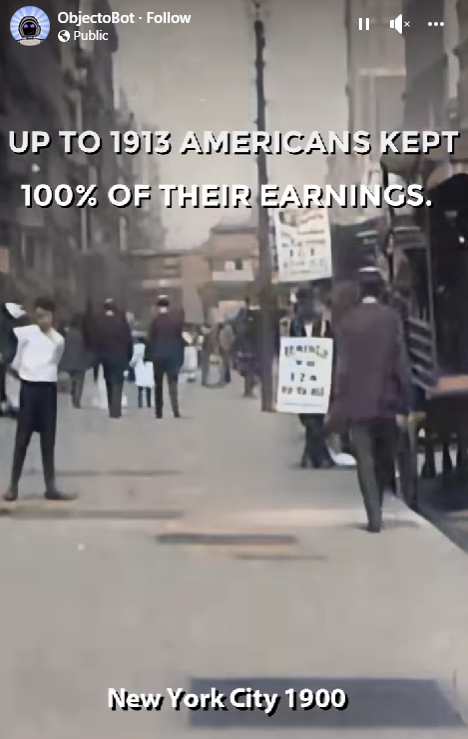 Lead Stories contacted David Cay Johnston, a Pulitzer-Prize-winning New York Times journalist, who specializes in coverage of taxes, and the author of "Perfectly Legal," a book about imbalances in the American tax system. In a September 29, 2022 email, Johnston responded that the video's claim is misleading:

Income taxes are only one of many taxes.

Both taxes applied to a very narrow range of people with big incomes.

There are many other taxes so people didn't live tax-free before 1913. Tariffs are a tax on imported goods. I'd call it a hidden or stealth tax that raises the prices of imported goods, which in turn benefits domestic producers who can raise prices to 99.9% of the imported product plus tariff.

There were also taxes on alcohol and various excise taxes on specific products (today its tires).

The Internal Revenue Service website features a timeline that also states that President Abraham Lincoln signed a tax law in 1862 "to help pay for Civil War expenses." The timeline includes a brief description of the ratification of the 16th Amendment in 1913.

In an August 2022 fact check titled "Fact Check: List Of 25 Taxes Does NOT Only Include Taxes That Didn't Exist 60 Years Ago," Lead Stories found that the American federal government "levied a national property tax as early as 1798."