Were there eight presidents of the United States before George Washington and did several Black presidents serve before Barack Obama was elected in 2008? No, that's not true: Washington was the first elected American president. There is a lack of historical evidence; plus, examples of genealogical research and, more recently, DNA testing that show no president prior to Obama was Black.

The claims appeared in a video posted on Instagram on October 18, 2022, with the title "What do y'all think? I'm just asking...IDk and don't have time to research lol✌🏽." The video begins with a clip of a 2009 television interview with the late musician Prince, under the headline "Prince Dropping Diamonds 💎 💎 💎." It opened:

But I found out there were eight presidents before George Washington. I wanted to smack somebody, you know? I wanted to know why I was taught otherwise. Just tell me the whole story. I'll fill in the blanks. 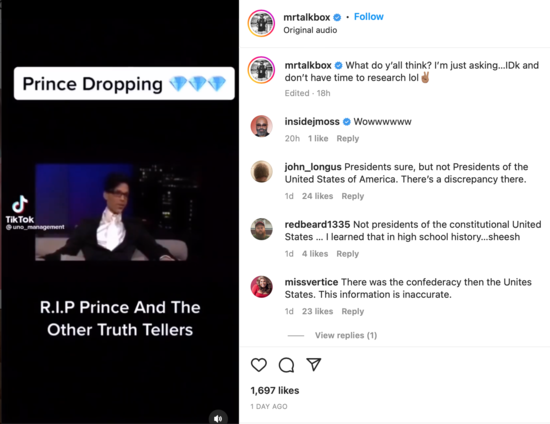 The video continues with claims from two unidentified male speakers about Blacks and the presidency. One man says there were seven Black presidents before Obama. The second man claims that all of the first seven U.S. presidents were Black men with interracial parentage.

A third speaker with a British accent also mentions John Hanson, who some have said was both Black and the first president of the United States. Among those presidents the post contends were Black: Dwight Eisenhower, Warren G. Harding and Abraham Lincoln.

Lead Stories is primarily addressing the claims about Black presidents in this fact check.

University of San Francisco professor James Taylor, who teaches African American political history, race and ethnic politics, and the U.S. presidency, said there is no legitimate scholarship or research to support the claims.

"There's no proof that there was even an African American president" before Obama, Taylor said in a telephone interview with Lead Stories on October 28, 2022.

Conjecture and questions about the African or African American ancestry of U.S. presidents have existed for decades. According to Taylor, the claims stem in part from efforts by white men to "racialize" other white men, to "darken," embarrass or discredit them.

"They were basically calling them 'n-lovers,' to be blunt," Taylor said. For example, "if you racialize Lincoln and say that because he ultimately worked for abolition that he was pro-Black -- which he wasn't -- you can then stigmatize him and say he was."

Journalist, author and amateur historian J.A. Rogers is credited in the 20th century with perpetuating the idea that many Blacks had served as president. He presented his theories in his self-published 1965 work "The Five Negro Presidents," which continues to circulate, including in a YouTube video posted on October 11, 2020.

Rogers' book has also served as the basis for other works promoting the same claims, including "Black People and Their Place in History" and "The Six Black Presidents: Black Blood, White Masks."

Historians have not substantiated any of these books' claims. Harvard University's Henry Louis Gates Jr., director of the university's W.E.B. DuBois Institute for African and African American Research and a genealogy expert, has written that Rogers' pamphlet "would get the 'Black History Wishful Thinking Prize,' hands down."

"It's not substantiated on anything other than rumors of white folks who are hating on other white folk who were being nice to Black people," he said. "He had no evidence really."

Theories about Blacks serving in the presidency persist in part because they are not intellectually well-documented, Taylor said. They also play into what psychologists and social scientists say is a predisposition to conspiracy theory or political paranoia among some in the Black community, which is born out of the historical mistreatment of African Americans, he said.

Taylor also noted that the post's opening claim from Prince that eight presidents served before Washington is also false and misleading. Under the Articles of Confederation formed by the 13 colonies, there were "governors but not presidents," he said.

DNA testing in 2015 showed that "Harding almost certainly had no recent ancestors with African blood."