Was the state of Texas, not Saudi Arabia, the largest oil producer in the world on October 7, 2018? No, that's not true: In 2018, Texas produced, on average, roughly 4.42 million barrels of oil a day, while Saudi Arabia produced nearly 10.6 million barrels a day on average, according to the U.S. Energy Information Administration's website. An energy expert told Lead Stories that, to the best of his knowledge, there is no publicly available data on oil production for specific days.

On this day, in 2018, Texas was the largest oil producer in the world, surpassing Saudi Arabia. WOW! Then came Brandon 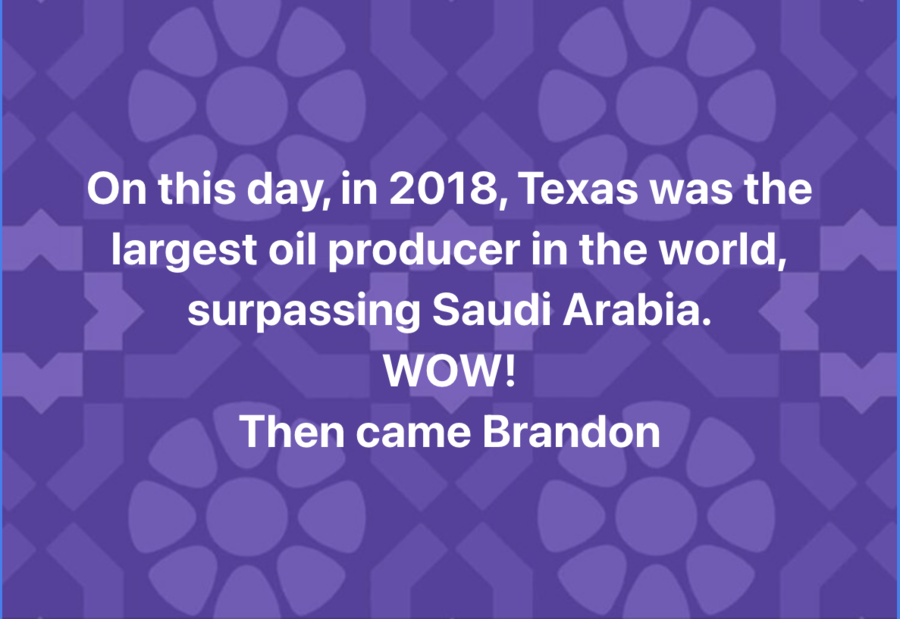 "Brandon" is a code name for President Joe Biden that conservative critics often use as an insult for the Democratic Party politician.

In 2018, when Biden was not in office, Texas did not produce more oil than Saudi Arabia, according to data from the U.S. government. The international data section of the U.S. Energy Information Administration (EIA) website estimates that Saudi Arabia produced nearly 10.6 million barrels of oil per day in 2018, on average. (Data from Saudi Arabia's Ministry of Energy shows a slightly lower number -- over 10.3 million barrels of oil per day in 2018.)

By contrast, the state of Texas produced less than half these reported totals that year -- about 4.42 million barrels of oil per day on average, the EIA estimates.

Texas' oil production has not reached over 6 million barrels of oil a day since the EIA started recording annual averages for their estimated oil production in 1981. EIA data shows:

Contrary to the claim on Facebook, no official production information exists for October 7, 2018 or any other specific date.

The EIA does not track the daily totals of oil production from Texas or Saudi Arabia or provide estimates for specific days of the year, EIA spokesperson Chris Higginbotham confirmed. The per-day figures cited here are for annual averages, derived from the annual total of estimated production divided by 365 days.

In an October 20, 2022, email, Ted Kury, the director of Energy Studies at the University of Florida, told Lead Stories that "I don't know of any public daily data."