Has a recording of Paul Pelosi's October 28, 2022, phone call to emergency dispatchers leaked? No, that's not true: The San Francisco Police Department, which responded to the attack on the 82-year-old husband of House Speaker Nancy Pelosi, denied to Lead Stories on November 3, 2022, that it has released any such evidence. A social media post claiming that "a leaked audio tape of the 911 call from the Paul Pelosi attack has surfaced" appears to be nothing more than a followbait scam. Lead Stories has found no proof that any such material has been either intentionally or accidentally released, or otherwise leaked to the public.

Text on the image reads:

BREAKING: A leaked audio tape of the 911 call from the Paul Pelosi attack has surfaced. The call proves that the liberal media has lied about what really happened. Instagram account @red.wave1776 is the only place to find it. Follow now before it's deleted. 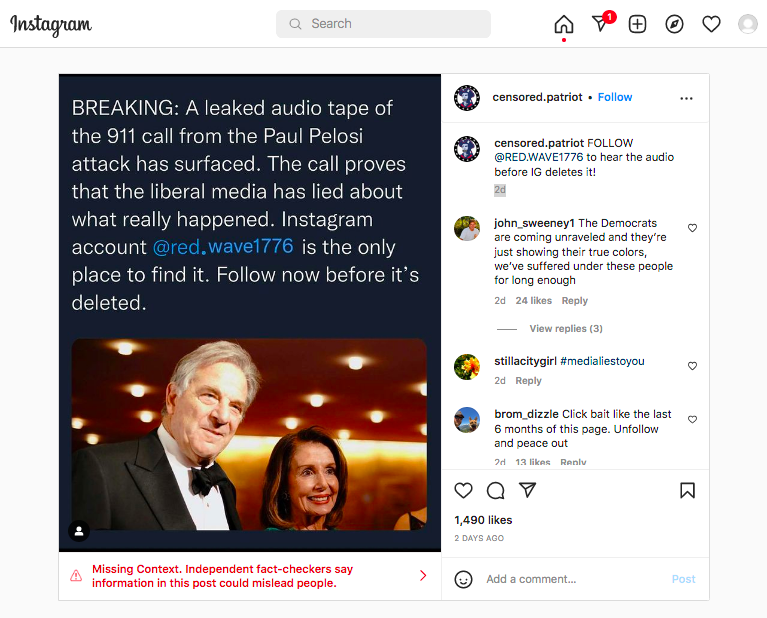 CNN reported on November 1, 2022 that both an audio recording from the 911 call and body cam footage from the police response do exist, and members of the Pelosi family have been granted access to the material. (The archived story can be found here.)

But in response to an inquiry from Lead Stories, a spokesperson from the San Francisco Police Department told Lead Stories that no audio from the 911 call, nor any other evidence has been released to the public. Officer Robert Rueca wrote in a November 3, 2022, email:

In an email sent to Lead Stories on November 3, 2022, the San Francisco FBI Field Office, which is also investigating the attack, declined to comment about the 911 audio.

As of November 3, 2022, a search for "911 audio Pelosi" on the website of the U.S. Department of Justice brought up only an October 31, 2022 press release about the charging of 42-year-old California resident David DePape for assault and attempted kidnapping after breaking into and entering the Pelosi residence. Such a search request on the San Francisco district attorney's website led to no results.

Lead Stories contacted the Department of Justice and the San Francisco district attorney to determine if and when such a recording might be made publicly available. When we receive a response, we will update this fact check accordingly.

A leak of this recording would have made headlines in major media outlets, but, to date, no reputable outlets have reported such events.

Nonetheless, the post claims, without presenting proof, that "The call proves that the liberal media has lied about what really happened" during the attack on the Pelosis' San Francisco residence.

But a Lead Stories reporter who followed this Instagram account found instead that hyperpartisan memes make up the majority of its posts. None of the posts included information about Pelosi's 911 call. This suggests that the claim about the call is only followbait.

Below is a screenshot of the content posted on @red.wave1776 as of this writing: 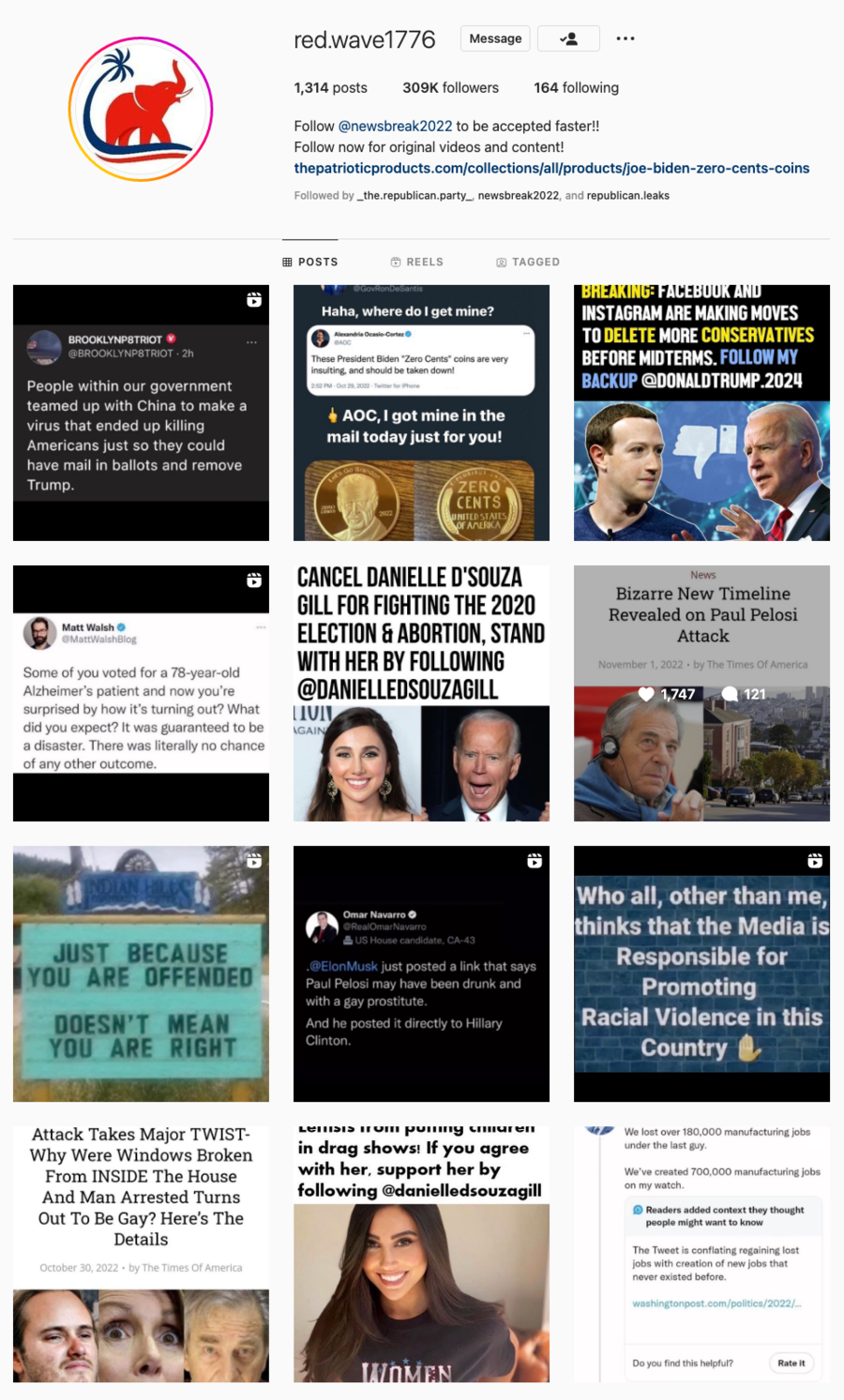 As of the time of this fact check's publication, the account's most recent post (featured below), from November 2, 2022, was completely unrelated to claims made in the Pelosi post. This post also instructs users to follow a similar account, @_the.republican.party_, which Lead Stories has fact checked before. 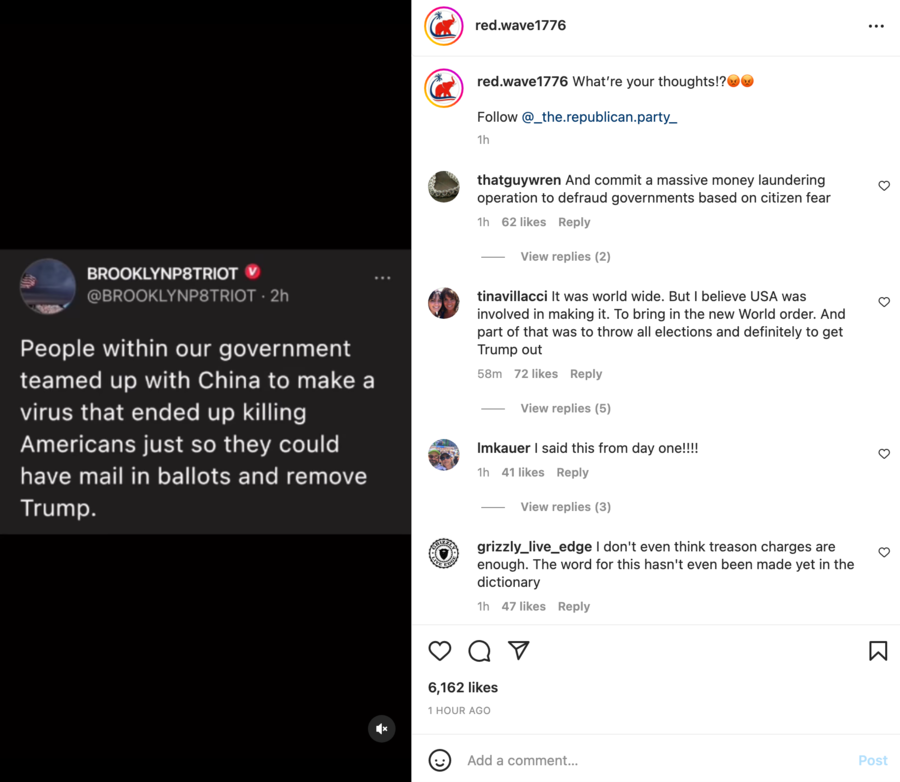 Additional Lead Stories fact checks related to the attack on Paul Pelosi can be found here.