Were Republicans blocked from voting in a polling station? No, that's not true: A social media video that implies this claim is from the Texas primary election that took place in March 2022. Voting officials from each party are responsible for running their side of each voting location. A lack of Republican voting officials at the location filmed caused the Republican side to close temporarily, according to the director of communications for Harris County, Texas. Democrats had workers at that particular primary polling place, which was why people could vote for Democrats, if they wanted to, while the Republican side was closed.

The video, eight months old at the time of writing, opens:

- I don't understand what you just said. What did you just say?
- OK, OK, with this election you can vote in any precinct.
- But you said the Republican side is not what? 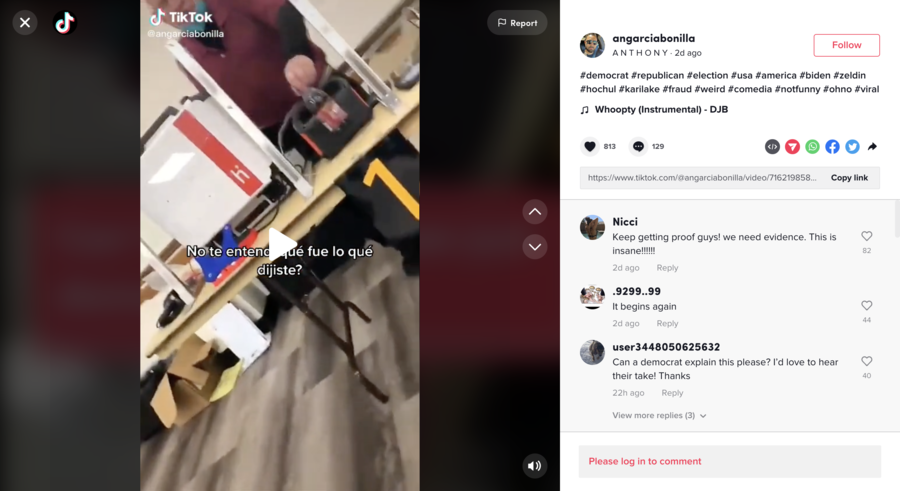 A man appearing to be a poll worker behind the counter explains to the person recording the video that he does not have "the staff," and the Republican side of the voting location is closed at that time. In response to questioning by the man, the worker tells the voter he can vote Democrat, but not Republican.

The post does not tell viewers where or when the 23-second video was filmed or explain its context.

The same clip was featured in a FOX 26 Houston news segment on voting issues during the 2022 Texas primary election. The report was later posted on YouTube on March 1, 2022. According to the report, people who wanted to vote in the Republican primary at the Hardy Senior Center in Texas' Harris County could not do so until three hours before the polls closed.

Even though both parties are at the same polling station, each is only responsible for making sure things run smoothly on their own side, Leah Shah, the director of communications and voter outreach for Harris County, Texas, told Lead Stories in a November 7, 2022, phone call. Shah explained what occurred in the TikTok video:

So, what we saw in the March primary was an issue with staffing. So ... both parties are responsible for hiring their polling judges and clerks for each polling location. That specific location did not have staff.

I don't know if it was for the duration of the day or if there was a late start to getting that side of the location staffed. So what that video is showing is that someone came to vote Republican, that side of the polling location was not open.

Election officials must be present at each party's voting locations. If one party or the other is lacking required staffing, that side of the polling place cannot operate.

Both parties reporting staffing issues in the March 1, 2022 primary, according to The Texas Tribune.

Before they take on their roles, Texas election judges and clerk sign an oath "not to persuade or induce" voters to vote a certain way and to "guard the purity of the election."