Does a "terminator gene" exist that creates seedless fruits that "sterilize" or cause infertility in humans who consume these fruits? No, that's not true: Multiple professors who study plant genetics told Lead Stories that these claims are false because terminator gene technology was never commercialized and seedless fruits, which are created naturally, are safe for people to eat.

Do Not Eat Seedless Anything!

The text underneath on the right-hand side reads:

On the left-hand side of the post, the text above the video of a man speaking reads:

DO SEEDLESS FRUITS STERILIZE US?

The top left corner of the video shows the handle @whoisprakasaka, self-described as an "American Born Mystic." The video, posted initially on the "whoisprakasaka" page on July 21, 2022, cites no credible sources or experts about the claims. 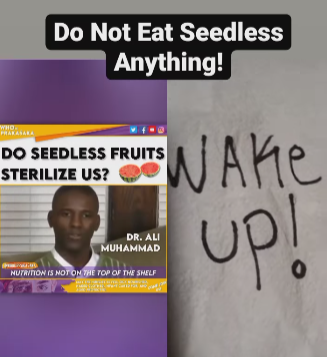 There is no scientific evidence to substantiate this claim, according to Bruce Reisch, a professor at Cornell University in the College of Agriculture and Life Sciences who specializes in plant breeding and genetics. He emailed Lead Stories on November 18, 2022 that:

The Instagram post refers to 'terminator gene' technology. This had been proposed by some companies to prevent the replanting of their company's seeds. However, to the best of my knowledge it was never implemented or commercialized. I work professionally with the development of seedless grapes and these have been produced by natural means for centuries. Genes from the ancient varieties Thompson Seedless and Black Monukka have been hybridized into most of the new seedless grapes on the international market. There has never been any evidence that seedless grapes are at all associated with human sterility.

I am less familiar with bananas, seedless watermelons, and other crops but again have never heard any scientific evidence that seedlessness in these crops is associated with sterility. In fact, eating fresh fruit is part of a healthy diet.

Terminator seed technology has absolutely not been used at all in bananas, grapes, and seedless melons, and while such technology might prevent plant seeds from germinating, there has been no scientific evidence that infertile plant seeds cause human infertility.

Amy Litt, an associate professor in the Department of Botany and Plant Sciences at the University of California at Riverside who specializes in plant diversity, evolution and development biology, similarly told Lead Stories in an email on November 18, 2022, that this claim was false:

This is wrong on so many levels. To start with, seedless fruits have been around for centuries and are naturally occurring variants. They existed long before any biotechnology invented 'terminator' genes. Most seedless fruits are NOT genetically modified by the introduction of terminator or any other genes. They occur naturally. This is certainly true for seedless grapes. In fact, according to this Michigan State website, NO current seedless plants are genetically modified.

Further, the natural mechanisms that result in these plants being seedless can't possibly affect humans. Plant 'seed' is different from human 'seed' - the plant seed is the result of fertilization, not the sperm that fertilizes the egg as in humans. And the mechanisms by which plants reproduce cannot in any way be compared to the way humans reproduce, any more than the way plants get nutrients (photosynthesis, absorption through roots) can be compared to the way humans get nutrients (eating and digesting). The only similarity is that gametes are produced and then fertilization occurs to form a new individual. In fact, in many plant species, the male and female gametes don't even have to be from different plants, many plants can fertilize their eggs with their own sperm cells - obviously not possible in humans.

Also, the 'terminator genes' don't actually prevent plants from making seeds. Instead, the seeds are not able to germinate and form a new plant. So a plant with a terminator gene in it WILL produce seeds.

Finally, there is a either ban or a moratorium on terminator technology literally everywhere, and there are no commercial applications. No crops have terminator genes (see this link).

There is literally nothing correct in this post. No crops have terminator genes, if there were crops with terminator genes they would not be seedless, seedless fruits occur naturally, and the fact that they are seedless can't possibly have any effect on human reproduction.

Jake Brunkard, an assistant professor at the University Of Wisconsin-Madison who studies plant genetics, also confirmed for Lead Stories via email on November 18, 2022, that this claim was false:

Seedless fruits have no effect on human fertility. Many plants make fruits without seeds, due to a variety of genetic and physiological causes within the plant, and none of those have anything to do with human biology or human hormones. Seedless fruits are completely natural and have been eaten by people for centuries, with no effect on human health. Briefly: there is no health effect of seedless versus seeded fruits, but there are big effects on how tasty the fruit is (who doesn't love a seedless grape or watermelon?)!

Brian Ellis, a professor emeritus of the University of British Columbia's department of botany, told Lead Stories via email on November 18, 2022, why this claim was false concerning the natural reproduction process of plants:

I can see no reason why a plant that has lost its ability to produce seeds should have any deleterious effects on humans when consumed (especially any impact on human fertility!)
Many biochemical steps are involved in plant seed formation, and any mutation that causes one of those steps to fail will usually block seed production.
Of course, such a failure would also make it difficult for the plant to reproduce; i.e. seedless plants are typically not going to produce offspring. This means that horticulturists must take special measures to block seed production while still allowing them to propagate the plant (for example, propagation through cuttings).

Monsanto announced in 1999 it would drop its "terminator" plant technology.

Lead Stories previously debunked the claim that seedless limes are genetically modified fruits. That fact check can be found here.