Has television personality and bounty hunter Duane Lee Chapman, also known as "Dog the Bounty Hunter," passed away as of December 13, 2022? No, that's not true: Chapman's publicist told Lead Stories on December 13, 2022, that he is "alive and well."

The claim appeared in a video on Facebook on December 11, 2022. The caption read:

Reality TV actor Duane Chapman has died at his home, he will be buried next to his wife Beth Chapman

Here is how the post looked at the time of the writing: 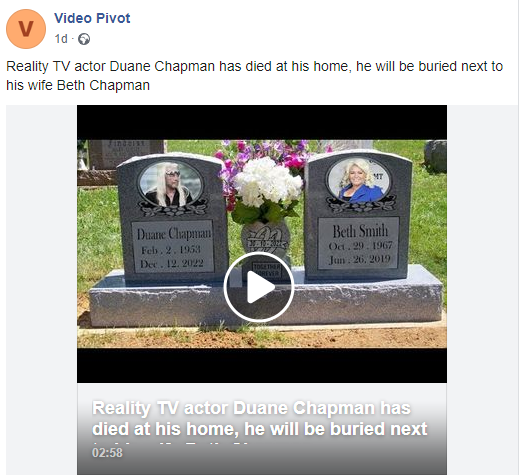 The video alleged that Chapman recently died from liver cancer, a few years after the 2019 death of his late wife, producer-actress Beth Chapman, from stage 2 throat cancer.

Chapman's publicist, Jennifer Willingham, confirmed in a December 13, 2022, email to Lead Stories that the video's claim about his death is false:

Dog Chapman is alive and well.

In a recent investigation, Lead Stories tracked how a network of Cambodian websites uses death hoaxes about prominent individuals to disseminate malware. Lead Stories cannot confirm whether or not the fake video about Chapman's death is part of that campaign.

The false rumor about the 69-year-old celebrity's death most likely began after he posted on his verified Instagram page a December 11, 2022, photo of his late co-star and friend, David Robinson, who passed away on November 30, 2022, from an unknown cause.

No posts on Chapman's Instagram or verified Twitter accounts indicated that he had died. A December 8, 2022, tweet from Chapman on Twitter featured a video of the entertainer speaking at an Illinois "police officers' party," which he described as "one of the most exciting times I've ever had my life."

In November 2019, Lead Stories also debunked a false claim that the Chapman had committed suicide after an "attack of depression." That fact check can be read here.