Did U.S. Special Forces arrest World Economic Forum (WEF) Chairman Klaus Schwab because he ordered the genocide of 90 percent of the world's population by forcing them to get vaccinated against COVID-19? No, that's not true: A WEF spokesman denied the claim, which appears to have originated on a self-described conspiracy website.

The claim appeared on Instagram on December 8, 2022. It opened:

The roundup begins of those responsible for the genicide plan.

On Sat. 3 Dec. 2022 US Special Forces began arrests of Klaus Schwab, the BIS, the WEF and other elites in Switzerland in an ongoing operation to stop those who ordered the genocide of 90% of the world's population. Their manmade toxic biological weapons (Covid tests and shots) took two to three years to kill through creating health conditions not limited to heart attacks, strokes, blood clots and malignant cancer. 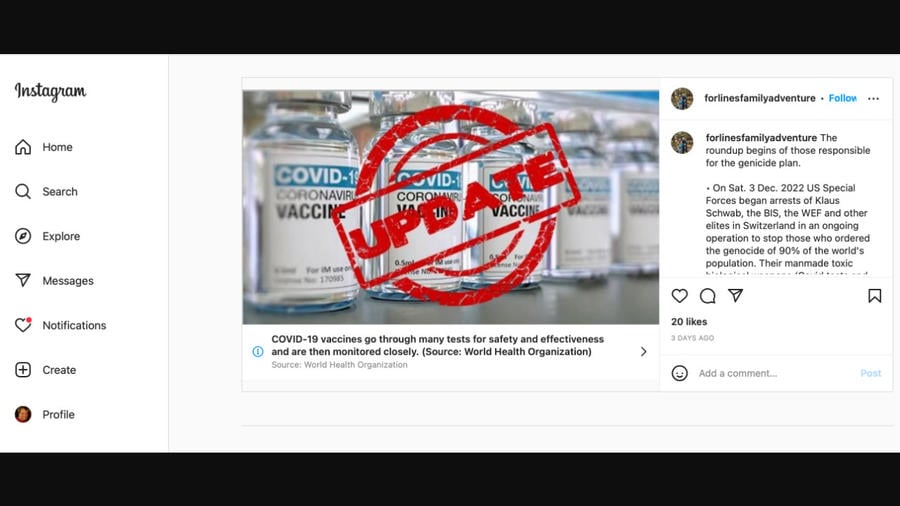 A claim with similar wording appeared on December 5, 2022, on a website called Operation Disclosure Official, whose stated mission is "to get you up-to-date on the latest conspiracies and to provide raw unvetted information from various sources." The site's homepage features the following disclaimer:

All articles, videos, and images posted on Operation Disclosure were submitted by readers and/or handpicked by the site itself for informational and/or entertainment purposes. All statements, claims, views and opinions that appear on this site are always presented as unverified and should be discerned by the reader. We do not endorse any opinions expressed on this website and we do not support, represent or guarantee the completeness, truthfulness, accuracy, or reliability of any content posted on this website.

On December 6, 2022, a claim whose wording is identical to the second paragraph of the Instagram post appeared at 1:35 of a video on Restored Republic, a website that also features unverified conspiracy stories.

A search of key phrases from the claim reveals that no serious news organization has carried stories about any such U.S. military operation, which would have made international headlines. The U.S. Department of Defense's website similarly has no news about U.S. Special Forces taking such action on or around December 3, 2022.

In a telephone interview on December 13, 2022, WEF spokesman Yann Zopf told Lead Stories the claim was part of a "targeted misinformation" campaign:

I can confirm that this is absolutely not true. It is part of these infamous conspiracy things that attack our organization and our chairman.

There is also no evidence that COVID vaccines can cause deadly health conditions, according to the World Health Organization.

The claim that international authorities have arrested Schwab in relation to purported crimes committed during the global dissemination of the COVID vaccine has appeared on social media several times. Lead Stories debunked one such story here.

Many conspiracy theorists accuse Schwab and other elites of deliberately orchestrating the COVID-19 pandemic to facilitate the investiture of a totalitarian planetary government under a plan known as the Great Reset, according to Carmen Celestini, a conspiracy-theory specialist at the University of Waterloo, Canada. In an analysis published on February 9, 2021, Celestini explained:

By halting the economy and "forcing" people to stay within their homes, [the global elites] have allegedly created laws that are an opening step towards the enslavement of all. The belief is that while people are in isolation and unemployed the various governments will try to alleviate our fears by eliminating all debt. In doing so the powerful cabal of elites will takeover the ownership of homes, businesses, and all real estate.

The Great Reset is, in fact, a WEF initiative that seeks to build a more inclusive, environmentally sustainable version of capitalism after the coronavirus pandemic. Lead Stories has debunked claims that the Great Reset is a front for an elite power grab.

Lead Stories has contacted the Pentagon and will update this story if they reply.