Was Klaus Schwab arrested at his home in Switzerland? No, that's not true: The founder of the World Economic Forum (WEF), was not arrested at home in Switzerland both the Swiss Federal Police and the police in Geneva, Switzerland said, calling the claim "fake news." The claim was originally posted on Conservative Beaver, a website that has since been disabled. As of this writing its URL only returns an error message.

The false claim was picked up by numerous sites and publications including this article published by CelebSaga on November 14, 2021 titled "Why Was Klaus Schwab Arrested? WEF Chairman Charged By Switzerland Police - What Happened?" (archived here) which opened:

Learn about Why Was Klaus Schwab Arrested? WEF Chairman Charged By Switzerland Police - What Happened? Klaus Schwab charges, what did he do?

Why Was Klaus Schwab Arrested? WEF Chairman Charged By Switzerland Police - What Happened?

Learn about Why Was Klaus Schwab Arrested? WEF Chairman Charged By Switzerland Police - What Happened? Klaus Schwab charges, what did he do?

On November 12, 2021 the Conservative Beaver website posted the article, archieved here, titled, "Klaus Schwab arrested at his home in Switzerland as #GreatReset trends." 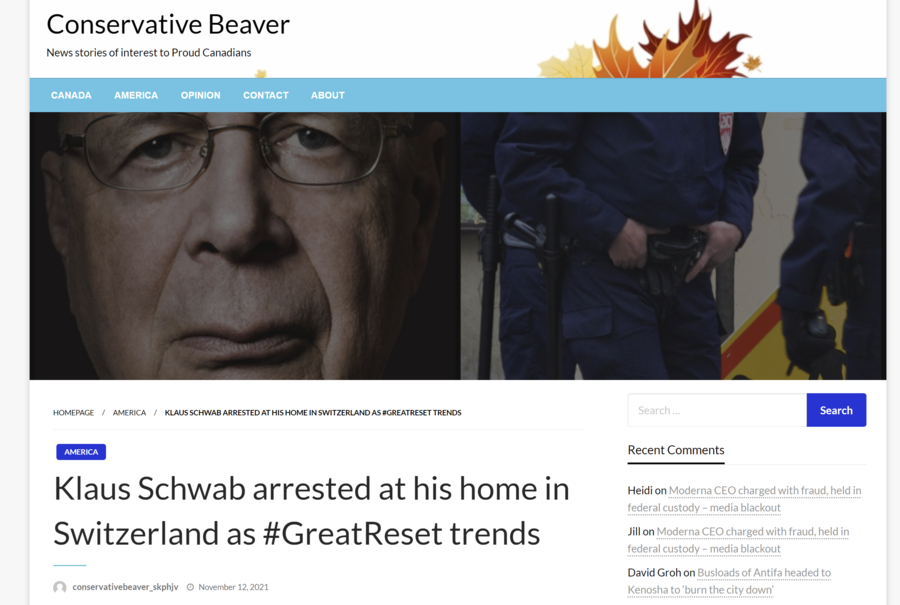 As of November 29, 2021, when you clicked the URL www.conservativebeaver.com the website started returning a message about an "Error 526" and an "Invalid SSL certificate," which could indicate either the hosting company or the operator pulled the plug on the site, archieved here.

Before it was taken down, the Conservative Beaver website showed several recent (real) news stories and at first sight it looked like a regular news website. However, the site has falsely claimed that George Soros was arrested for election interference, that the pope was arrested for child trafficking and that Brian Laundrie was found alive.

A Lead Stories archive of the site from November 23, 2021, had this message:

Conservative News. Canadian Style.
The Conservative Beaver informed Canadians and made them smile for over 10 years.
Now, it is time for us to go. Thanks for tuning in.
Disclaimer: Our stories mostly featured real events and were factually accurate, however some of our stories were satirical works of fiction and never meant to be taken seriously.

The purported story of Schwab's arrest was denied by both the Swiss federal police and the Geneva police department. "We can confirm that Klaus Schwab was not arrested by the Swiss police," Florian Näf, spokesperson for the Federal Department of Justice and Police told Lead Stories via email on November 30, 2021. Geneva police spokesperson Jean-Philippe Brandt also told Lead Stories via email on November 30, 2021, "This is fake news." AFT Fact Check first reported the statements from Swiss law enforcement.

Lead Stories published an in-depth investigation into the person behind Conservative Beaver and concluded it could possibly be a man named Mark Slapinski, a Toronto-based journalist.

A summary of why we believe that to be true can be found in the Lead Stories article titled, "Pfizer Petitions Court For Identity of 'Conservative Beaver' Publisher -- Lead Stories May Have Found Him." From the article: