Has the U.S. military "extracted giant mummies" from caverns in the Grand Canyon? No, that's not true: The story about Egyptian artifacts allegedly found in North America goes back to the beginning of the 20th century. Since then, it has been debunked multiple times.

The current version of the claim originated from a Prophecy Watchers video (archived here) published on YouTube in 2019 and reposted in July 2022.

At the 3:52 mark, Steve Quayle -- described on his website as "nationally known radio host ... photographer and author of a number of important books ..." -- said:

... this is why the Egyptian presence in the Grand Canyon is so important. I photographed the Grand Canyon from helicopters. ... I photographed one day, a long day, we did 1,000 miles of the Grand Canyon going up to Page Arizona and then back again with really high-powered cameras. But what was intriguing to me, Gary, is the fact that all of the landforms, for instance, as you go east of Monument Valley, which is the iconic American West where all the great Westerns are formed, you know, you get into what's called the valley of the gods. Now, why is a land formation called the valley gods? Why are all the landforms in the Grand Canyon itself? Which by the way, is 90 percent off-limits ...

There's a gentleman who was invited to go into the secret warehouses of the Smithsonian. In other words, imagine the last scene of 'Raiders of the Lost Ark,' the first one, and was shown the Egyptian artifacts taken from the Grand Canyon. He was shown the giant mummies, he was shown giant bones. He was shown all of the Egyptian if you will, antiquities that were, were present and excavated. And I just let it slip a little bit. Why is 90 percent of the Grand Canyon off limits? Well, they'll tell you it's for ecological reasons. Wrong, because the U.S. military is literally on the rim, drilled into certain caverns that they identified through all their, their technical abilities and extracted -- extracted -- giant mummies. 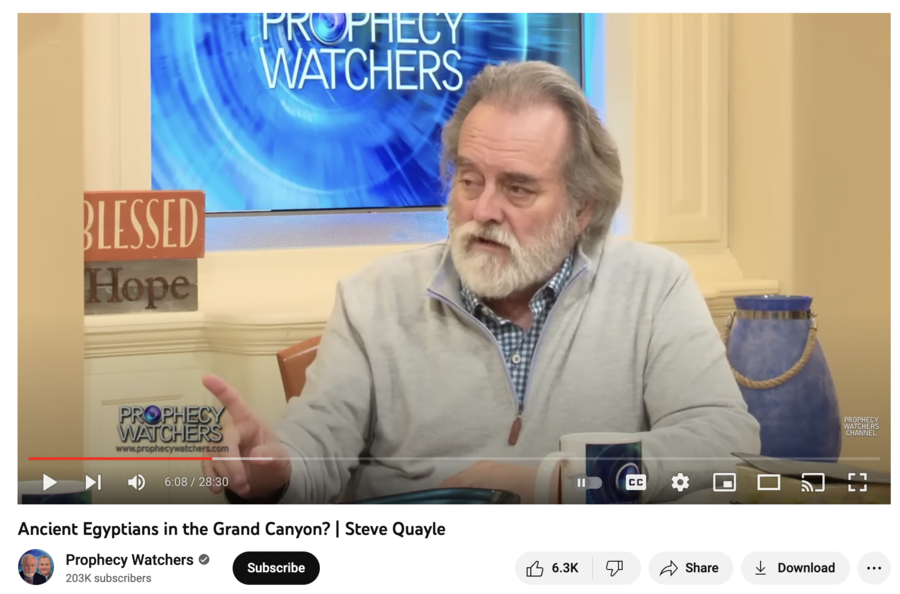 A wave of posts in 2023 across many social media platforms, including Instagram and TikTok, recycled the 2019 YouTube video whose speaker, Steve Quayle, has made claims previously debunked by Lead Stories here, here and here.

The initial clip does not show "giant mummies," the supposed activities of the "U.S. military" or the alleged Egyptian artifacts. It does not name the mysterious man who, as the claim says, got to see secret Smithsonian findings and it does not refer to a particular verifiable timeframe.

The maps available on the Grand Canyon's official website do not show any military bases.

The U.S. Department of Defense website returns a single search result mentioning the Grand Canyon, but that is a first-person account of a World War II veteran recounting his training.

According to the U.S. Department of the Interior website, there are about 1,000 caves in the Grand Canyon. As the park's website specifies, these caves are closed to visitors because they are highly susceptible to man-induced impacts:

Grand Canyon caves are unique resources with fragile environments that provide habitat for a range of cavern-dwelling wildlife, including sensitive bat species.

The speculations about Egyptian artifacts in North America go back to the beginning of the 20th century.

According to the public library of Pima Country, Arizona, rumors about supposedly found mummies in the Grand Canyon originated from an article published by the Arizona Gazette on April 5, 1909. The report claimed that an expedition overseen by Prof. S.A. Jordon and archaeologist G.E. Kincaid uncovered some evidence of an Egypto-Tibetan culture there. The Smithsonian was described as a supposed sponsor of the endeavor. The library website says:

This story is not true but continues to be repeated.

In 2009, the Smithsonian Magazine published an article titled "175 Years of the Smithsonian's Most Untrue Stories." The myth about the discovery of Egyptian artifacts in the Grand Canyon was ranked No.4:

... the Arizona Gazette appears to have been the only newspaper ever to have published the story. No records can confirm the existence of either Kincaid or Jordan.

The same year, the magazine of the Grand Canyon Historical Society wrote:

... 1910 Gazette article made no mention of the Egyptian cave story of the previous year. In the weeks after running the story in 1909, the Gazette made no further comment on it. There was really no reason for newspapers to comment on it. Everyone understood where this type of story was coming from. These were the years when John Hance, with his tall tales, was a tourist attraction at the Grand Canyon. Tall tales were a long American tradition, especially on the frontier.

Nevertheless, despite the issues with verifying the initial 1909 claim, it resurfaced at the end of the 20th century.

In 1994, John Rhodes, who described himself as "the world's foremost authority on Reptilian-Humanoids," wrote a piece retelling the myth about the alleged underground city, a story deriving from the same Arizona Gazette article. Rhodes speculated about some "reptilian connections."

In 1999, David Icke, a former British-born broadcast commentator who was banned from entering the Schengen zone for two years in 2022 for propagating conspiracy theories, boosted the rumors about the connections between the purported Kincaid discoveries and reptilians in his book "The Biggest Secret," echoing the sentiment that the Smithsonian Institution was supposedly hiding the artifacts from that purported expedition.