Did Japan launch an official investigation into "millions of COVID vaccine deaths" in December 2022 or early January 2023? No, that's not true: As of January 4, 2023, there is no available evidence to suggest that "millions" of people in Japan had died as a result of COVID vaccines, nor had any such investigation been announced by public health officials or Japanese political leaders. The articles in which the claim originated provided no details or evidence to further corroborate the supposed death toll or alleged investigation.

Japan has launched an official investigation into the unprecedented numbers of people dying after receiving the Covid-19 vaccination.

According to reports, Japanese researchers have been instructed to investgate the mechanisms by which experimental mRNA jabs could be causing deaths and severe adverse reactions.

Here is how the NewsPunch article appeared at the time of the writing of this fact check: 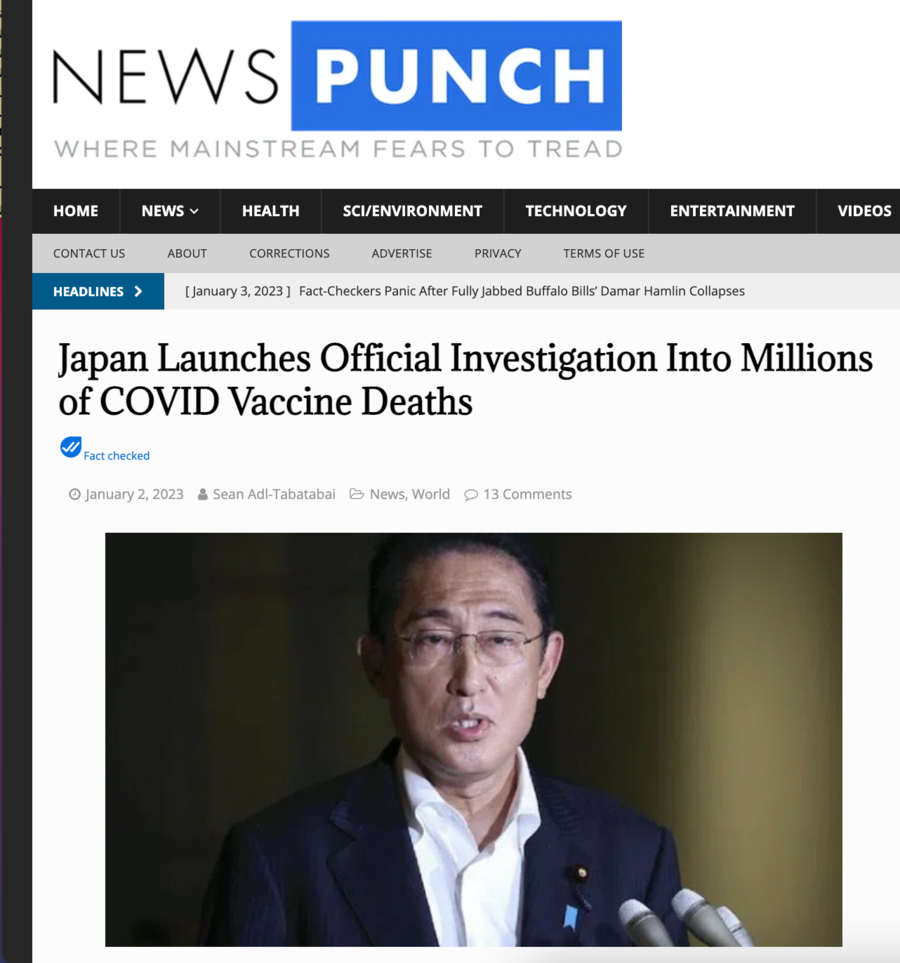 As of January 4, 2023, there is no available evidence to suggest that "millions" of people in Japan have died as a result of COVID vaccines, nor have Japanese public health officials or political leadersany announced any such investigation. The NewsPunch article provided no details, evidence or links to official statements to corroborate the supposed death toll or its claim of an investigation.

A look through the COVID section on the Ministry of Health, Labour and Welfare of Japan website, as well as an analysis of recent news releases and related press conferences, did not return any results for an announcement of such an investigation. As of this writing, the most recent news announcements from the office of Prime Minister Fumio Kishida did not pertain to COVID and did not mention millions of vaccine-related deaths or an investigation into such deaths.

Lead Stories contacted Japan's Ministry of Foreign Affairs, the Prime Minister's Office and the World Health Organization. We will update this article accordingly if responses are received.

To imply that the risk of COVID vaccination outweighs the benefits touted by healthcare professionals globally, the NewsPunch article cited two studies reportedly conducted by Japanese researchers. The NewsPunch article does not contain links to either of these supposed studies, which were both mentioned in the Twitter thread.

Lead Stories contacted both of the named researchers to determine whether the article in question gave an accurate representation of their work, and to request a copy to the research mentioned. If we receive a response, we will update this fact check accordingly.

Masataka Nagao of Hiroshima University School of Medicine was the first researcher cited in the NewsPunch article, which claimed that:

Hiroshima University School of Medicine Prof. Masataka Nagao highlighted how the bodies of vaccinated persons he performed autopsies on were abnormally warm, with upwards of 100 degree F body temperatures.

The NewsPunch article also wrote that Nagao's research team found "there were significant changes to the genetic makeup of vaccinated autopsied patients' immune systems." This, the article noted, allowed the team to "conclude the vaccine causes immune system abnormalities that prompt inflammation throughout the body, which is likely the cause of the high body temperatures at the time of autopsy."

However, the article made no connection between Nagao's work and the COVID death toll or the supposed official investigation. Contrary to the article's claims, NewsPunch quoted Nagao as saying that the research did not prove a causation between vaccine and death:

Nagao's university profile, last updated on December 1, 2022, does not include any published research related to COVID, vaccines, or SARS-CoV-2.

The NewsPunch article also mentioned the research of dermatologist Shigetoshi Sano, a professor at Japan's Kochi University School of Medicine. The article claimed that Sano "discussed discovering spike proteins at the site of skin lesions and other skin problems on patients who were vaccinated." Spike proteins enable viruses to enter other cells and proliferate, according to a definition from News-Medical.net.

The article cited Sano as saying that "[v]accination may cause our overall immune system to fail to fight" the COVID virus.

As was the case with Nagao's research, the NewsPunch article did not establish a connection between Sano's work and the supposed "millions of COVID vaccine deaths" that it claimed had prompted a government investigation.

As of January 3, 2023, Japan had experienced since 2020 nearly 28.8 million confirmed cases of COVID-19 and 56,228 reported deaths from the virus, according to the World Health Organization. Over 349.2 million doses of COVID-19 vaccines had been administered by late November 2022.

There is no evidence that COVID vaccines have caused millions of deaths, but a November 2022, study by three Japanese medical schools, the Tokyo Medical Examiner's Office, and the Tokyo Metropolitan Government found that vaccine-related adverse effects may have caused 1,690 deaths in Japan between February 17, 2021 and April 17, 2022. However, the researchers added that "a lack of sufficient information" prevented a complete assessment of vaccination's impact on these deaths. The researchers concluded that the "many cases of deaths after COVID-19 vaccination in this study showed no definite causal relationship between vaccination and deaths."

Indeed, August 2022, research, funded in part by the Japan Ministry of Health, Labour and Welfare, showed that Japan's vaccination program led to "substantial reductions" in COVID cases (by 33 percent) and in deaths (by 67 percent). As of this writing, Japanese government and health officials contend that vaccination is the best form of protection against COVID infection and severe illness.

NewsPunch (formerly YourNewsWire) has published several hoaxes and fake news articles in the past that raise further questions about the accuracy of what they write or publish. Their Facebook page "The People's Voice" even lost its verification checkmark according to a 2018 report from Media Matters For America.

The NewsPunch site's Terms of Use (archived here) also make it clear that the outlet does not firmly stand behind the accuracy of its reporting:

In a 2017 profile, The Hollywood Reporter described the site, then called YourNewsWire, as "a 3-year-old website of murky facts and slippery spin ..."

Lead Stories reported in 2018 that YourNewsWire rebranded itself as NewsPunch in an apparent effort to evade filtering or blocking.

Additional Lead Stories fact checks of claims from NewsPunch stories and of claims related to COVID vaccines can be found here and here, respectively.