Is the Speedway gas and convenience store chain giving $500 gift cards to consumers who answer three questions as part of a price-gouging lawsuit settlement? No, that's not true: The post is a hoax. There is no evidence on Speedway's official web page of any lawsuit settlement and a link included with the post doesn't route uses to any real gift card applications or offers.

The claim appeared on Facebook on January 23, 2023, along with a photograph of people milling around a gas station pump with one man hunched over three large plastic gas cans. Its caption read:

Speedway customers can get a $500 payback! Speedway raised prices unfairly in 2022. Answer 3 questions if you went to Speedway in 2022 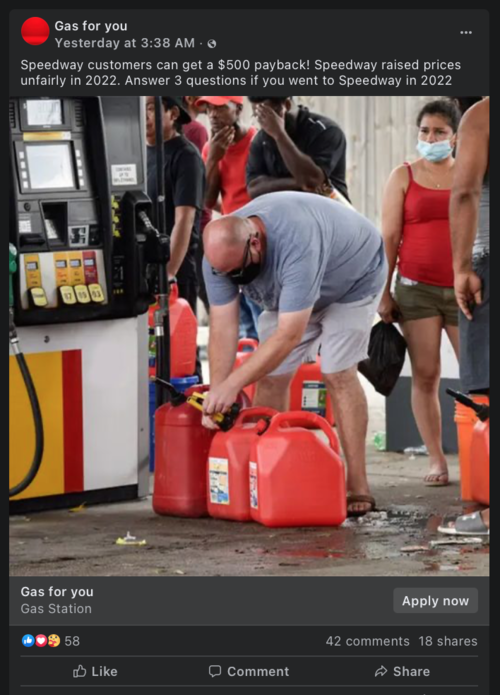 The "Gas for you" Facebook account making the claim was created on January 23, 2023, according to its "Page Transparency" section, and its "About" section doesn't have background information on the page or its creator.

A date comparison shows the Speedway gift card offer was made on same day the site was created and is one of only two posts on the page. The second post (also made on January 23, 2023) promotes the same $500 Speedway offer but uses a different photograph.

Lead Stories found no evidence on webpages for Speedway or its parent company, 7-11, offering gift cards to consumers as part of a settlement agreement. Nor could any such offers be found on Speedway's official social media accounts (Twitter and Instagram).

A Google news search for "Speedway lawsuit settlement agreement $500 gift card" also came up blank. In the past, Speedway did reach settlement agreements in lawsuits alleging employee pay inequities and price gouging, but neither included gift card offers or other payouts to consumers.

The "Apply Here" icon on both Speedway gift card posts use redirects to send users to a fake settlement gift card questionnaire page or other webpages.

On January 23, 2023, however, the same "Apply Here" icon redirected users to a fake gift card questionnaire, which Lead Stories archived here. Both pages use the same underlying URL, even though the content changed, a close review shows.

Here's how the archived fake questionnaire looked on the day of this writing: 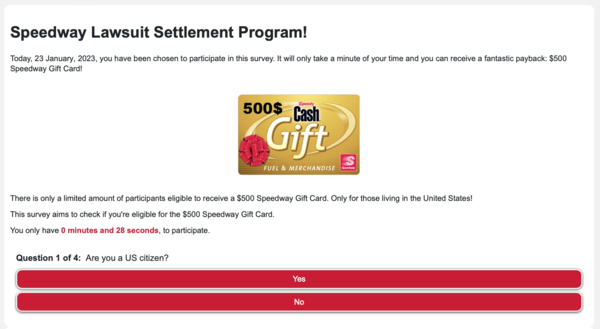 Additionally, Lead Stories conducted a reverse image search of the Facebook post's photo, which linked the image to an August 31, 2021 news article about the impact of Hurricane Ida on New Orleans and the U.S. Gulf Coast by Reuters.

The photo used on Facebook of a man crouched in front of large, red plastic gas cans was taken at a Shell Oil Company gas station -- not a Speedway -- and is credited to Reuters photographer Steve Nesius. It appears in a gallery of post-hurricane images that ran with the story.

Speedway's official website does show that the company launched a "$500 Speedy Cash Card Sweepstakes" on January 1, 2023, which will give winners a $500 gift card. There is no indication in the sweepstakes rules that it is connected to any lawsuit or settlement agreement.

An email message seeking comment from 7-11 was not immediately returned to Lead Stories on January 24, 2023. This story will be updated if the company replies.

The Speedway $500 gift card claim resembles other claims from January 2023 offering gift cards for consumer survey-takers at Lowe's and Walmart, store credits or $500 Target gift cards as part of settlement agreements. Those claims were debunked by Lead Stories.