A tiger shark has made its way into Raintree Plantation Lake. Believed to have started as an unwanted pet, it is assumed to have been introduced to the lake when its owner could no longer care for it in an aquarium setting. Officials in Hillsboro have contacted the Missouri Department of Conservation and will likely have a team on the lake this week to capture the shark. Department officials remind Raintree residents to not introduce foreign wildlife into Raintree lakes without the express written consent of the Raintree Plantation Property Owners Association.

None of it is true. First of all, the photo used with the story is from an Australian story about an encounter with a (dead) Tiger shark. 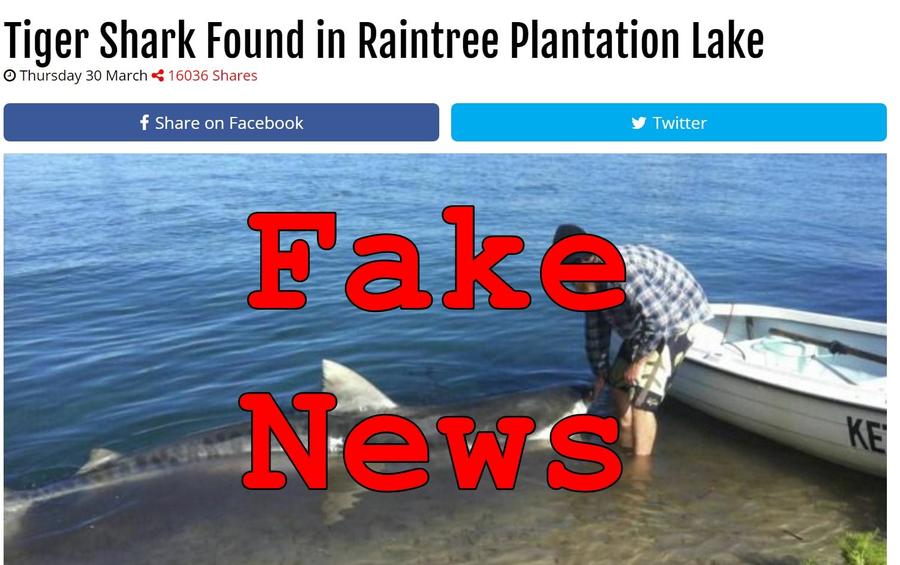 Secondly, there was a short disclaimer at the end of the article:

Don't take it Seriously. It's a joke.

Enough people seem to be taking the story seriously enough to share it as you can see in the Trendolizer graph at the end of this article. Many of them probably don't even read the disclaimer because they only see the summary on Facebook before hitting that share/like button. No other fact checking sites like Snopes have debunked this hoax yet, so if you see people spreading it do send them here by all means.