A fresh day, a fresh hoax from The Resistance: The Last Line of Defense. The title of today's offering is "BREAKING: Trey Gowdy Just Had A Federal Judge Issue An Order To Exhume A Body" and naturally the army of fake news websites stealing content from this satirical website have already copied and spread the story as true. The story deals with the conspiracy theory surrounding the death of Vince Foster and the supposed involvement of the Clinton clan. It starts like this:

For the first time in history, a US Congressman has asked that a body be exhumed in connection with an investigation by a House intelligence committee. Judge Harmon Watson agreed to issue the order for a work crew in Fairfax, Virginia to exhume the body of Vince Foster for autopsy.

The order came just minutes after evidence turned up in the case of a murdered reporter who had an "if anything ever happens to me" letter delivered to his publication that implicated Hillary Clinton in a 23-year-old crime, which put it right around the time of Foster's supposed "suicide."

The image that goes with the article is actually from the 2014 exhumation of an unidentified victim of a truck crash that took place in 1991. That should be the first clue the article is not true. 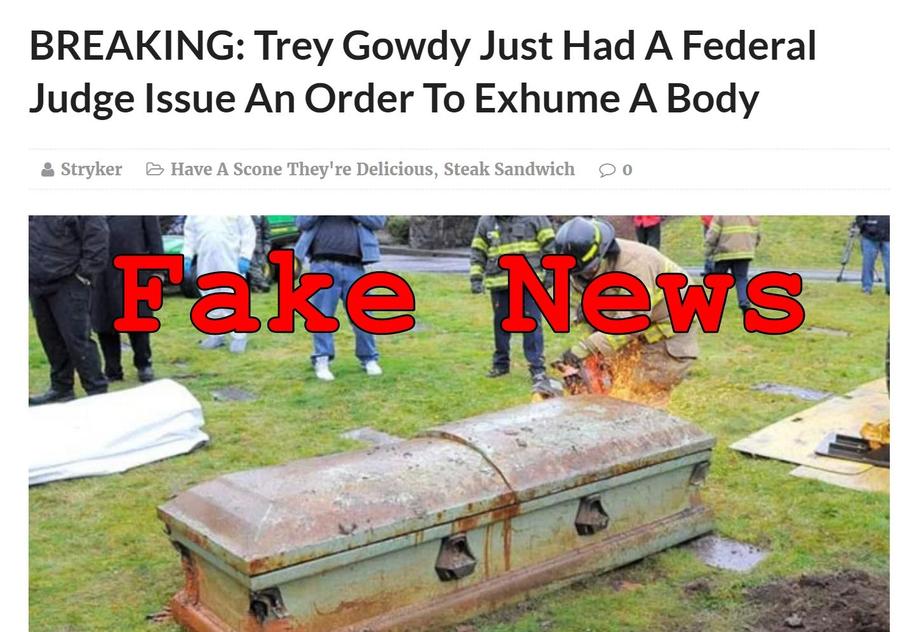 The second clue is that The Resistance: The Last Line of Defense is a known fake news website that carries following disclaimer on its about page:

No other fact checking or hoaxbusting websites (like Snopes etc.) have debunked the story yet and it is being shared around widely as you can see in the Trendolizer graph at the end of this article. If you notice anyone spreading the rumor around you can help by pointing them to this article here because nobody likes fake news.