Was Chinese tourist Ming Zhang Wei really arrested in Kenya with over 300 zebra penises in his luggage, along with animal penises from several other animals like lions, baboons, buffaloes, pink flamingos and giraffes? Of course not!

That story originated on a satirical website named World News Daily Report on March 9th 2018 in an article titled "KENYA: CHINESE TOURIST ARRESTED WITH 300 ZEBRA PENISES IN HIS LUGGAGE" (archived here) which opened:

Officers of the Kenyan Customs Services Department have arrested a Chinese tourist attempting to board a flight for Shanghai after finding a total of 510 genital organs from wildlife animals in his suitcases.
37-year old Ming Zhang Wei was arrested this morning at the Jomo Kenyatta airport in Nairobi while carrying two suitcases full of animal penises.

The genital organs come from a variety of animals: 309 from zebras, 46 from baboons, 31 from buffalos, 27 from giraffes, 14 from lions and even 21 from pink flamingos.

A few penises were so badly preserved that their nature was impossible to identify.

The man in the photo illustrating the article is not 37 years old and his name is not Ming Zhang Wei. It is in fact 21-year old Jiahao Yuan (who really is Chinese) but the picture is his mugshot which was taken in a 2011 sexual assault case in Florida:

The article also cites "Kenya Police Commissioner, Mathew Iteere". This man actually exists but according to the website of the Kenyan police he was only Commissioner until 2013. 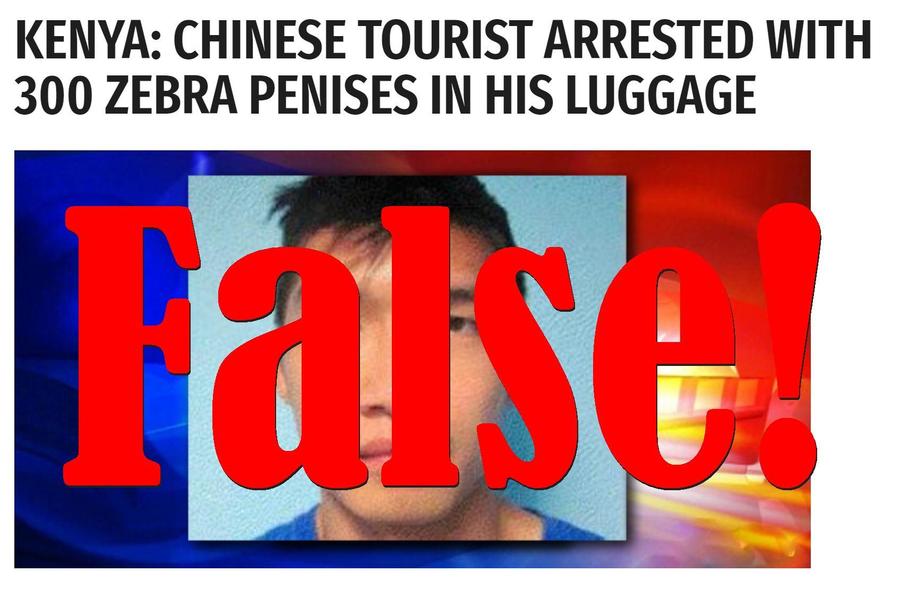 It is run by Janick Murray-Hall and Olivier Legault, who also run the satirical Journal de Mourréal, a satirical site spoofing the (real) Journal de Montéal. His articles are frequently copied in full by other websites without mentioning the source (something which we higly disapprove of) and who omit the satire disclaimer so people think they are real. Often people only see the headline, photo and description of his stories on social media so they assume they are real. For an example: check the card at the bottom of this tweet (archived here):

"Zebra penises, for example, are often dried, powdered and drank to cure impotency and increase the size of men's genital organs"

China a nightmare for Animals too.
https://t.co/T2ppRdO6Ky