Did a "new" poll find that "the majority" sides with President Donald Trump? No, that's not true, despite the headline of an article being pushed by a network of foreign-run websites. The poll to which the article refers is not new and it does not show a majority siding with Trump in the way one would expect after reading just that headline. Despite Trump's improving approval rating the article is not real news but a piece of clickbait deployed by foreigners looking to make a quick buck off gullible conservatives and Trump supporters sharing and liking the story.

The story appeared in an article published on a website named "Phoenix US News" on October 1, 2018 titled "New Poll Finds That The Majority Side With Trump... Are You One Of Them?" (archived here) which opened:

The poll says, 56 percent of the registered voters deemed the order a " terrorist hot spot restriction," while 37 percent said it is more likely "Muslim Ban."

Although more than half of the those polled do not believe the move was not an attempt to discriminate based on religion, a majority of the country disapproves of the executive order. Forty-six percent supported Trump's Jan. 27 immigration order, according to Washington Examiner.

1,013 registered voters nationwide voted through landline and cellphone interviews. The poll was conducted by the Anderson Robbins Research and Shaw & Company Research. The survey's margin of error was three percentage points for all registered voters.

New Poll Finds That The Majority Side With Trump... Are You One Of Them?

The poll in question already dates back to February 2017 when Fox News first reported on it. The poll was about the executive order putting a 90-day travel ban on people from certain countries:

A majority of voters thinks President Trump's executive order on immigration is better described as a restriction on terrorist hot spots than as a "Muslim ban." And more think the action makes the U.S. safer than say it makes the country less safe.

The "majority" mentioned in the story comes from this part:

The poll asked voters to choose between two descriptions of the executive order: 56 percent think it's better described as a "restriction on people entering the United States from known terrorist hot spots." Some 37 percent say "a Muslim ban" is more accurate.

Despite "siding" with Trump on the description of the executive order, a majority disapproved of the measure:

Even so, more disapprove (52 percent) than approve (46 percent) of the temporary travel ban.

In addition to that, a quick look at Trump's current job approval (which is what most people would understand in the context of "siding with") shows that it currently stands at about 43.9%, definitely not a majority even though the number has been steadily improving over the past year or so, up from a low of 37% in December 2017.

So, in summary: not a new poll and not a majority. Yet the same story was pushed on several other websites:

All of the sites pushing the story have been registered anonymously (most in just the past month or so) but Unfakery has noticed in this video that similar sites likely from the same network have been promoted by Indian or Pakistani Facebook accounts in the past:

Our own investigation (via a new tool we're developing on top of our Trendolizer engine) shows that many of the sites are related through shared IP addresses or Google Adsense accounts: 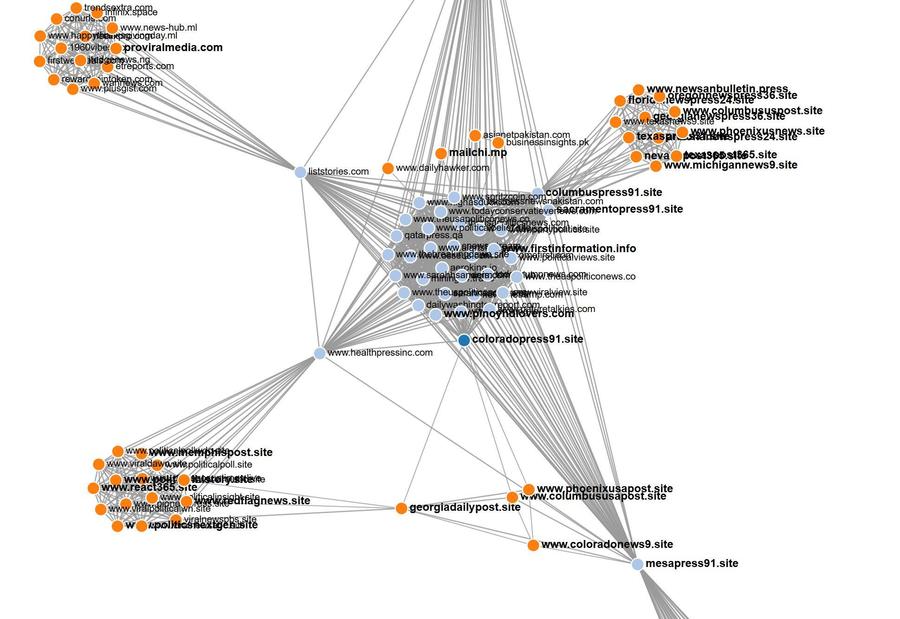 We'll be monitoring this network with great interest in the coming weeks here at Lead Stories. Internally we have dubbed it the "Post Dot Site" network after the oft-repeated pattern in many of the domain names of the sites in it.