Did Democrats vote 228-197 in favor of allowing illegals to vote? And is that "insanity" because they have been fighting against "foreign involvement in our elections" for two years? No, that's not true: the claim made in a viral internet image is based on a wrong interpretation of a vote that did take place on March 8, 2019 which did not give illegals the right to vote and which actually included one Republican on the side with 228 votes.

An example of the viral image can be seen in a Facebook post (archived here) where it was published on July 11, 2019. The text on the image read:

INSANITY: Democrats spent 2 years fighting "foreign involvement in our elections" then voted 228-197 in favor of allowing illegals to vote. 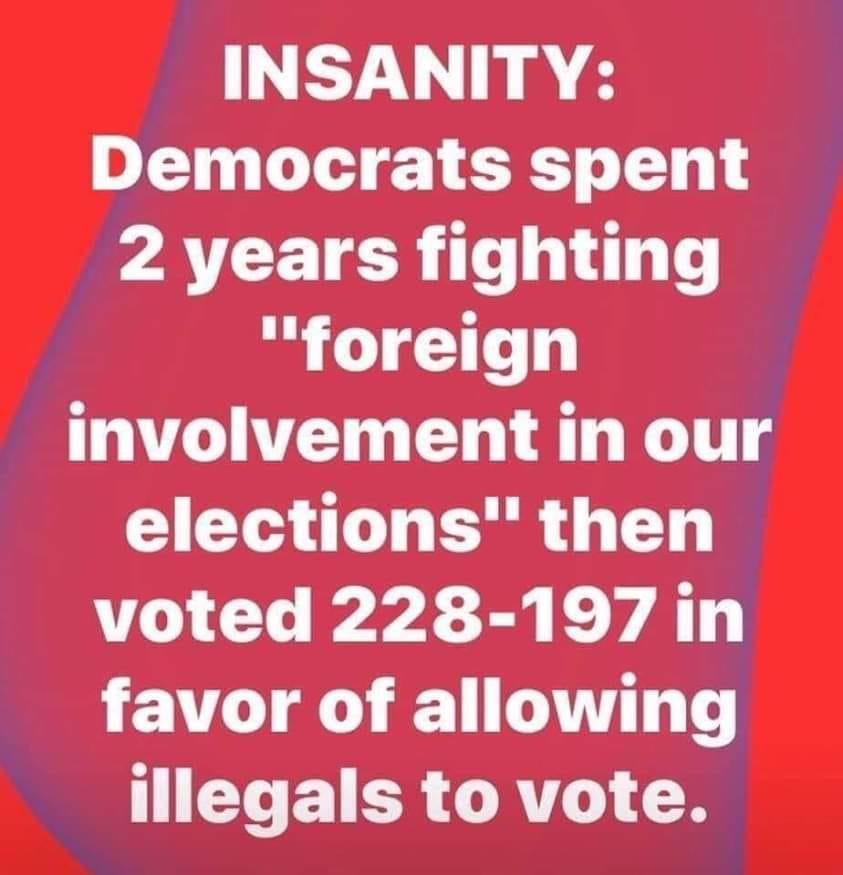 The 228-197 vote was in response to a proposal from Dan Crenshaw (R) to add some language to the end of the text:

Congress finds as follows:
(1) Voting is fundamental to a functioning democracy.
(2) The Constitution prohibits discrimination in voting based on race, sex, poll taxes, and age.
(3) It is of paramount importance that the United States maintains the legitimacy of its elections and protects them from interference, including from foreign threats and illegal voting.
(4) The city of San Francisco, California, is allowing non-citizens, including illegal immigrants, to register to vote in school board elections.
(5) Federal law prohibits non-citizens from voting in elections for Federal office.

... It is the sense of Congress that allowing illegal immigrants the right to vote devalues the franchise and diminishes the voting power of United States citizens.

Crenshaw himself described the change as follows in a tweet:

Today I offered a motion to recommit #HR1 reaffirming that only US citizens should have the right to vote.

Next time you go to the ballot box, keep that in mind. The future of their party is in cities like San Fran, where illegals can vote. Let that sink in.

Voting against that motion does not give anyone the right to vote, so the claim that 227 Democrats (and one Republican) voted to allow illegals to vote is definitely a stretch.

Note that the motion (and HR1) are about Federal elections and the reference in Crenshaw's tweet about San Francisco is about local elections. But it is factually correct:

San Francisco will allow noncitizens to vote in a local election, creating a new immigration flashpoint

San Francisco in November will become the largest city in the nation to allow noncitizens the chance to vote in a local election, making the city once again a flashpoint in the debate about immigration. Noncitizens, including those without legal status, will be allowed to vote only in a school board race and just a little more than 40 have registered to vote so far.

The similar versions of mostly the same hoax were debunked earlier by other fact checkers:

No, Democrats did not vote to allow noncitizens to vote

A misleading social media post suggests that House Democrats want to give the right to vote to noncitizens. "House Dems 228 yes 197 GOP no to allow illegal aliens to have right to vote. Let that sink in America!" stated a March 9 Facebook text-post that was posted on a page called Donald Trump for President Martin County, Florida.

Always check if it is actually true before liking/sharing a statement making strong claims.