Was Rashida Tlaib overheard saying she would bring "Jihhaad" (not "jihad", important difference...) to America? No, that's not true. The story was published by a liberal satire website that tries to fool Trump supporters and Republicans into sharing made up stories that are clearly marked as satire when you actually click them. Articles from the site are frequently copied by foreign-run fake news websites. The people liking and sharing these stories are enriching foreign website operators (or a liberal from Maine) via the ad revenue generated with the content which is probably not what they expected or wanted.

The story originated from an article published by Taters Gonna Tate on August 18, 2019 titled "Rashida Tlaib Overheard: 'We Will Bring Jihhaad to America'" (archived here) which opened:

Michigan Representative Rashida Tlaib was allegedly overheard by a White House page saying she had plans to commit treason in the most blatant way possible.

Senate Page, Will D. Portcha, was doing his rounds yesterday morning when he passed by Tlaib's office where she was in the midst of conversation on the telephone. He says she was in "an extremely excited state, ranting and raving" and that "she seemed to have an agenda."

Rashida Tlaib Overheard: 'We Will Bring Jihhaad to America'

Michigan Representative Rashida Tlaib was allegedly overheard by a White House page saying she had plans to commit treason in the most blatant way possible. Senate Page, Will D. Portcha, was doing ...

Besides a ton of satire disclaimers on the page and the category it was posted under ("Satire and/or Conservative Fan Fiction") readers could have spotted several other hints that make it clear the story is not true.

But despite this several people seem to have fallen for the story after it was posted into several Conservative Facebook groups, judging by the comments: 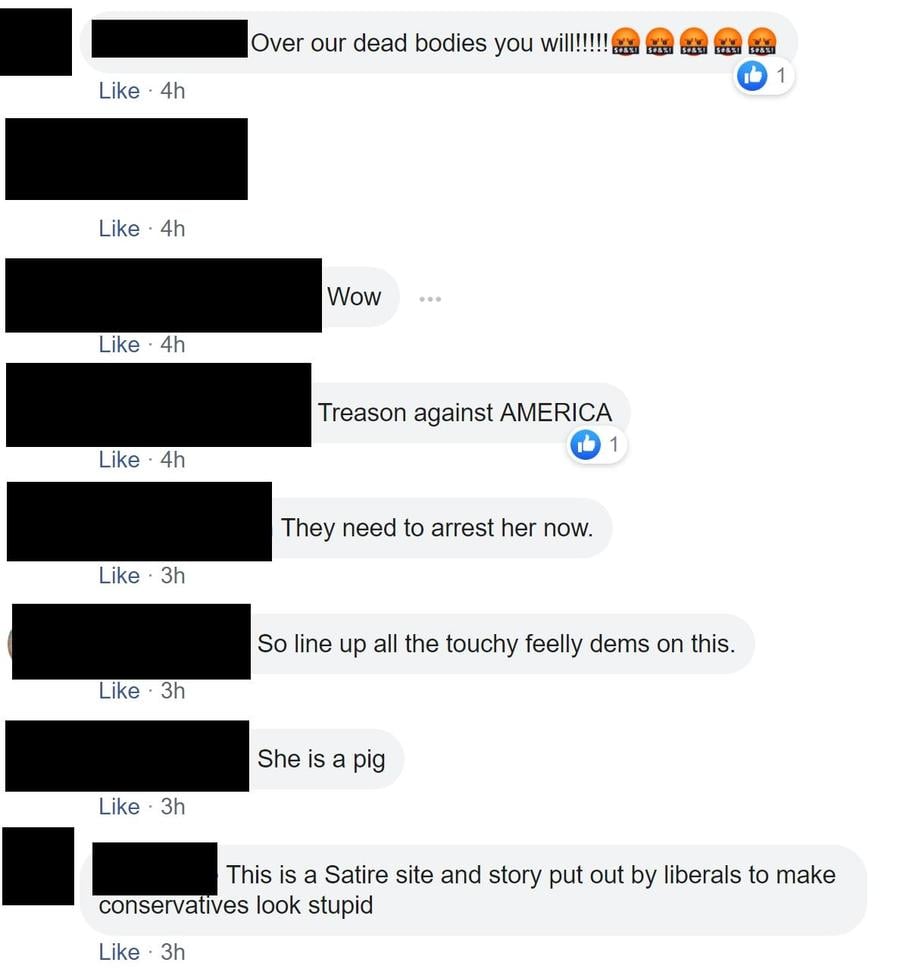 The site Taters Gonna Tate is part of the "America's Last Line of Defense" network of satire websites run byself-professed liberal troll Christopher Blair from Maine along with a loose confederation of friends and allies. Blair has been in a feud with fact checking website Snopes for some time now and has also criticized other fact checkers in the past who labeled his work "fake news" instead of satire. In reaction to this he has recently rebranded all his active websites and Facebook pages so they carry extremely visible disclaimers everywhere.