Does burning sage kill 94% of airborne bacteria with disease-causing strains staying gone for 30 days? No, that's not true: A study published in India in 2007 did conclude that one hour of exposure to smoke from the burning of havan samagri, a traditional Hindu medicine, did rid a room's air of bacteria, but the study did not involve sage.

The story originated from an article (archived here) where it was published by GetHolisticHealth.com under the title "Burning sage kills 94% of airborne bacteria, disease-causing strains stay gone for 30 days". It opened:

The ancient ritual of burning sage to purify the air turns out to be more than a superstition!

The Native American ritual of "smudging" or burning sage to clear the air of "bad energy" turns out to ward away more than just "negative vibes."

A recent study showed burning the herb in a room for an hour reduced the number of airborne bacteria by a whopping 94%.

The room remained almost entirely disinfected for over 24 hours, and seven strains of disease-causing bacteria previously present in the room still could not be detected 30 days later.

"We have demonstrated that using medicinal smoke it is possible to completely eliminate diverse plant and human pathogenic bacteria of the air within confined space," wrote the study's authors, from the National Botanical Research Institute in India. 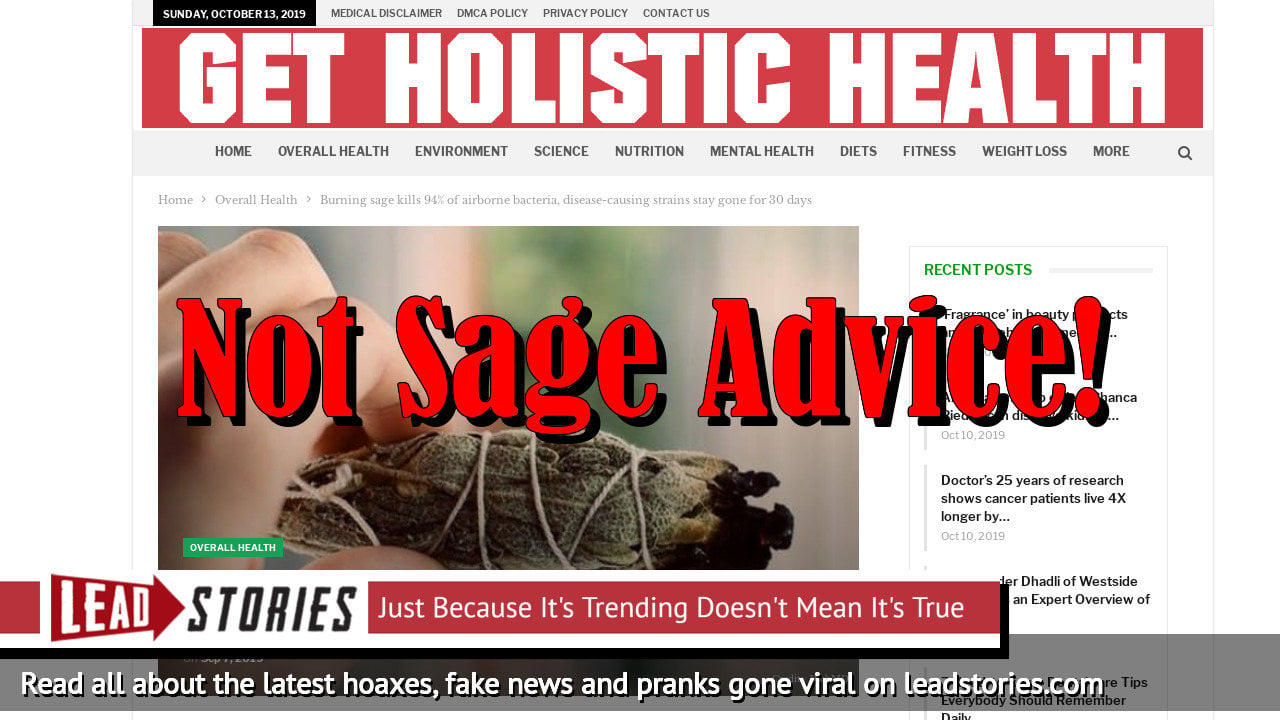 Lead Stories staff likes to burn sage monthly to rid our newsroom of any bad spirits that may have infiltrated our environment, although we do not have any evidence it helps. There is no scientific research to back up the practice, although it does give us the feeling that at least we are doing something. When we saw the story claiming that our sage burning was also reducing bacteria in the air, we had to learn more. We read the study titled "Medicinal smoke reduces airborne bacteria." We found no references to sage. The researchers did not test sage. The researchers burned wood and a mixture of havan samagri. No sage. This is the abstract of the research:

This study represents a comprehensive analysis and scientific validation of our ancient knowledge about the effect of ethnopharmacological aspects of natural products' smoke for therapy and health care on airborne bacterial composition and dynamics, using the Biolog microplate panels and Microlog database. We have observed that 1h treatment of medicinal smoke emanated by burning wood and a mixture of odoriferous and medicinal herbs (havan sámagri=material used in oblation to fire all over India), on aerial bacterial population caused over 94% reduction of bacterial counts by 60 min and the ability of the smoke to purify or disinfect the air and to make the environment cleaner was maintained up to 24h in the closed room. Absence of pathogenic bacteria Corynebacterium urealyticum, Curtobacterium flaccumfaciens, Enterobacter aerogenes (Klebsiella mobilis), Kocuria rosea, Pseudomonas syringae pv. persicae, Staphylococcus lentus, and Xanthomonas campestris pv. tardicrescens in the open room even after 30 days is indicative of the bactericidal potential of the medicinal smoke treatment. We have demonstrated that using medicinal smoke it is possible to completely eliminate diverse plant and human pathogenic bacteria of the air within confined space.

Before you add havan samagri to your monthly burning ritual, read about it from IndiaMart.com:

The Havan Samagri is a sacred offering in the yagna and each item of the samagri is significant. The havan samagri is offered in the fire during yagnas and homas, after completion of every mantra chant. It is the sacred food for the deities.

It is anti-bacterial and is made from high grade raw materials. It is 100% natural Havan Samagri.

Again, no sage was burned.