The photo recently appeared in a Facebook post (archived here) published on November 29, 2019 with a caption that read:

And here is a closer look at the image: 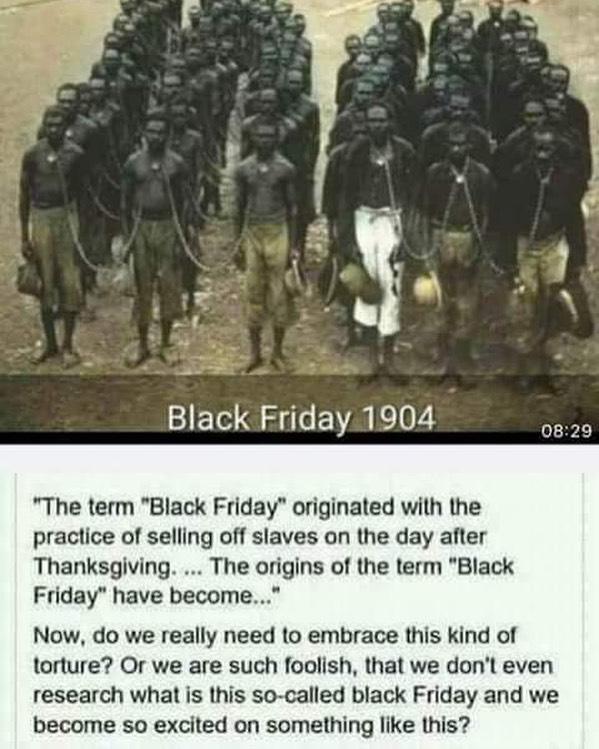 Now, do we really need to embrace this kind of torture? Or we are such foolish, that we don't even research what is this so-called black Friday and we become so excited on something like this?

However Snopes already pointed out in 2013 that the term did not originate from the slavery era:

How Did 'Black Friday' Get Its Name?

"Black Friday" is the (originally derisive, now mainstream) term for the phenomenon that takes place in the U.S. on the day after Thanksgiving Thursday, when millions of consumers who get the day off from work or school crowd into stores for what is traditionally considered the beginning of the Christmas shopping season.

The use of "Black Friday" as a descriptor for the day after Thanksgiving has nothing to do with the selling of slaves, though, and the term didn't originate until nearly a century after the practice of slavery was abolished in the U.S. The earliest known use of "Black Friday" in such a context stems from 1951 and referred to the practice of workers calling in sick on the day after Thanksgiving in order to have four consecutive days off (because that day was not yet commonly offered as a paid day off by employers)

The date in the image (1904) is also suspect if was supposed to show U.S. slavery since the practice was outlawed in 1865 after the U.S. Civil War. And indeed it turns out it is a picture from Australia, you can see it on the cover of this book:

Every Mother's Son is Guilty: Policing the Kimberley Frontier of Western Australia 1882-1905

by Chris Owen In Every Mother's Son is Guilty, Chris Owen provides a compelling account of policing in the Kimberley district from 1882, when police were established in the district, until 1905 when Dr. Walter Roth's controversial Royal Commission into the treatment of Aboriginal people was released. Owen's achievement

This Guardian review of the book contains a description of the image:

But the cover photograph of Every Mother's Son is Guilty: Policing the Kimberley Frontier of Western Australia 1882-1905, by historian Chris Owen, rocked me.

The photo depicts 100 or so Aboriginal prisoners, men and boys, chained by their necks, in Wyndham, the small port town of the late 19th century established to serve the pastoral and mining industries of the Kimberley. The picture was taken between 1898 and 1906.

Still pretty terrible but no relation at all to Black Friday or U.S. slavery.