Did Ben Carson, the Housing and Urban Development Secretary, offer to do brain surgery on U.S. Rep. Maxine Waters? No, that's not true: Although Carson and Waters, a California Democrat, have shown great disdain for one another in the past, Carson, who was appointed by President Donald Trump, never made such a statement.

The claim, which has been making the rounds since at least December 2017, resurfaced in an article (archived here) where it was published by Magna Newspapers on November 16, 2019, under the title "Ben Carson Offers to Perform 'Much Needed' Brain Surgery on Maxine Waters". It opened:

The main similitudes between Republican Ben Carson and Democrat Maxine Waters are that the two are unmistakable African-American political pioneers. Beside this, the two couldn't be any more extraordinary.

Generally, Ben Carson attempts his best to disregard Waters as well as can be expected, notwithstanding her steady assaults against the Secretary of Housing and Urban Development.

In June, Mad Maxine yelped and undermined the cerebrum specialist that on the off chance that he ought to go before the House Committee on Financial Service, she'll "dismantle him." Days after her tirade she additionally expressed that she might want to 'dismantle his butt.' 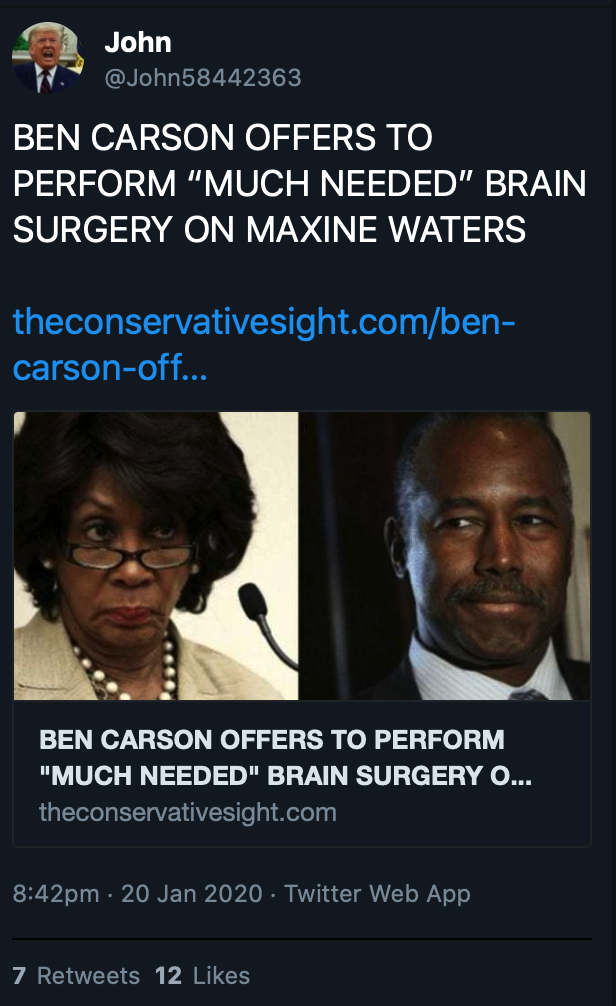 There is clearly no love lost between the two, who have attacked each other multiple times, including in writing, according to a November 18, 2019, POLITICO story. Waters wrote about Carson: "Your shamelessness knows no bounds," when referring to a proposal to move the homeless off the streets in California - including in the district she represents. Carson retorted that Waters "lacked basic manners" and that "shamelessness is a career politician of 30 years laying blame."

Despite the ongoing animosity, however, online searches show no record of Carson offering to perform brain surgery on Waters. The alleged quote doesn't even appear in the story by Magna newspapers, which does claim that Carson said: "my administrations are constantly accessible to her for a genuinely necessary cerebrum assessment."

The earliest version of this story appears to be from December 3, 2017, in the now-deleted redstarjournal.com, according to BuzzSumo.com, which tracks 21 instances of the story being shared tens of thousands of times on social media.

Lead Stories reached out to HUD, and a spokeswoman called the report "fake news."

NewsGuard, a company that uses trained journalists to rank the reliability of websites, describes magnanewspapers.com as:

A site in a large network of hoax websites that plagiarize content from satire sites without disclosing that the stories are made up.

We wrote about magnanewspapers.com before. Here are our most recent articles that mention the site: