Did several guests at the recent State of the Union wear American flag pins with the "Q" logo on them? No, that's not true: While supporters of the so-called QAnon conspiracy theory claimed that several guests were wearing "Q" flag pins, we enhanced the images in question. The pins actually featured what appears to be a presidential seal, not the letter "Q."

The claim originated from a video post published by And We Know on February 6, 2020, titled "AWK NEWS 2.6.20: [DS] coup attempt against POTUS will not go unpunished" (archived here).

The narrator on the video showed several individuals who he claimed were wearing American flag pins with a "Q" on them at President Trump's State of the Union address on February 4, 2020. The suggestion was that this was a silent nod to the anonymous individual who believes that the "deep state" is actively plotting against Trump.

One of the individuals shown in the video wearing a pin was Jody Jones from Farmersville, California. His brother was murdered by an illegal immigrant.

Here is a high-resolution photo of Jones in the U.S. House Chamber on Capitol Hill during the speech. Lead Stories enhanced that image, and it's clearly not a Q but rather what appears to be a U.S. presidential seal. 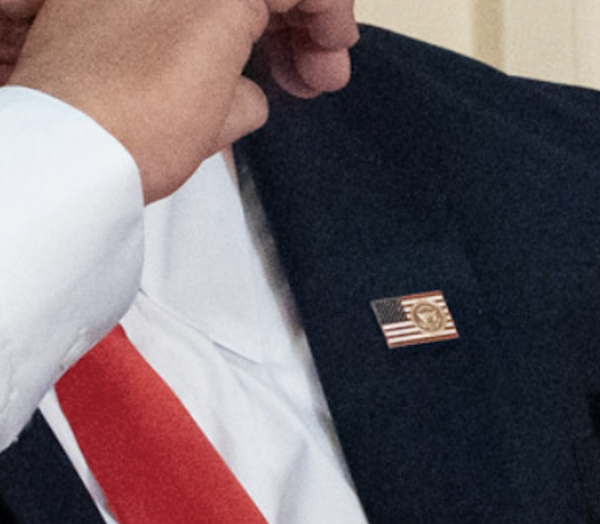 At a distance, the red stripe from the flag may give the appearance of a curly Q, but it is not.

Others suggested that even a young boy was seen wearing a Q flag pin, but it appears to be the same style pin that Jones was wearing:

Guests of Honor received American Flag pins.
With Q's on them.
: ) pic.twitter.com/emX3d91GcO

Some websites have been hawking Q-adorned flag pins, but they look nothing like what anyone was wearing at the State of the Union address.