Did the King of Bahrain attend a convention with an eight-foot-tall weaponized robotic bodyguard? No, that's not true: This video shows a performer wearing a partially mechanized robot suit in a promotional appearance as "Titan the Robot" at the UAE defense show IDEX in Abu Dhabi in 2019.

The claim originates from a video in a post published on Facebook on August 25, 2020, (archived here) with following text:

King of Bahrain arrives in Dubai with his Robot bodyguard. Talk about the 4th Industrial Revolution.
It can speak 6 languages. It can rescue him literally carry him from mobs. It can physically fight, chase, shoot. It's armed with an electric teaser, an undisclosed 360 degrees camera system Secondary to a set of infrared cameras, 3 hidden machine guns with enough ammunition to fight 1050 men and a laser guided sniper machine gun. It also carries the medications and water
The guard cost about US $7.4 million

A tweet from the verified account of UAE Forsan (archived here) boasts of the appearance of, "The world's first commercial entertainment robot," eight-foot-tall robot greeter, Titan, at IDEX2019. 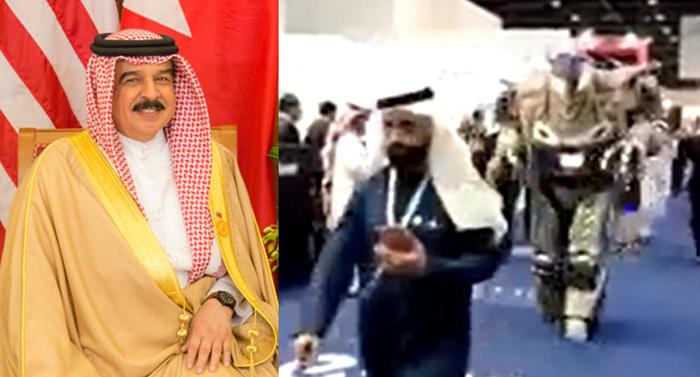 On the left: Official White House Photo of King Hamed bin Issa of Bahrain by Shealah Craighead, 2017. On the right: unknown man followed by Titan the Robot.

Titan, the self-proclaimed "future of entertainment," belongs to the UK-based Cyberstein company and has performed around the world. A far-ranging variety of the international appearances are featured in videos and articles of Titan's blog.

Titan the Robot does have many interesting features, but not the weapons mentioned in the fanciful caption of the post. He does comedy and other tricks to entertain audiences. Titan's comedy show can be reworked to be performed in languages other than English. Currently the official website (here)(archived here) only mentions a full show available in French although delivering custom messages is part of the promotional robot's duties.

Titan does carry a small amount of water on board, but this is only used for his crying prank (pictured here)(archived here). There is more than one Titan available for hire, but apparently from the company's Booking Enquiry Form, they will not accept bookings from other robots.