Would a proposed Florida bill make a transgender student athlete "drop her pants" to prove she's a girl before playing on a Florida school sports team? No, that's not true. Both versions of the bill in Florida (a state House bill and a state Senate version) provide for either genetic testing or testing of a child's endogenously produced testosterone levels by their own doctor. The House version, HB 1475, allows the personal doctor to sign a certificate about the "student's reproductive anatomy" as one alternative. Neither version of the legislation requires a child remove their clothing for an immediate physical examination. As of April 21, 2021 neither bill was expected to pass in the 2021 legislative session.

The claim appeared in an article (archived here) where it was published by Little Things on April 21, 2021, under the title "New Anti-Trans Bill In FL May Make Kids In Sports Have To 'Prove' Their Gender". It opened:

It's another tough day for transgender children. While their lives are already difficult trying to figure out their identity among many who don't believe that their personal battle is real, people are still set on taking their rights away. 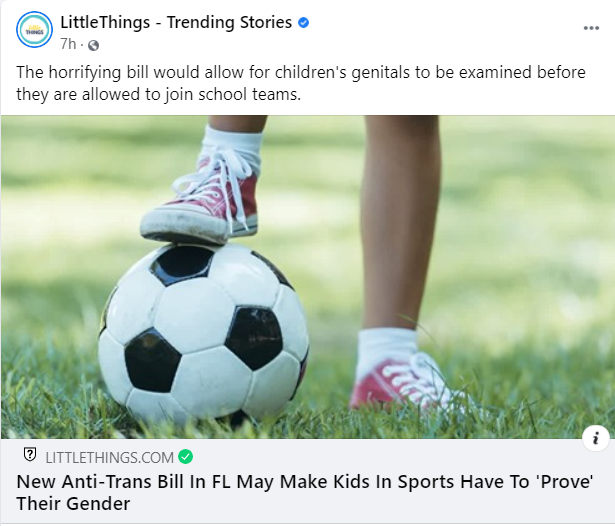 Florida's House of Representatives reportedly approved a bill that makes it OK for children in sports to be "checked" to make sure that they fit the right team. That means that if your child was born with male anatomical parts yet identifies as a female, she will be disqualified to play on a sports team with other young women the second she's asked to drop her pants.

Florida's House of Representatives reportedly approved a bill that makes it OK for children in sports to be "checked" to make sure that they fit the right team."

The article cites a Twitter thread from Chris Mosier, a transgender advocate and triathlete with the quote about a person having to "drop her pants" to compete on a girls team.

🚨FLORIDA is on the verge of passing a bill that will subject any girl who is questioned on her gender to invasive examinations of her reproductive anatomy.

No 14 year old should have to drop her pants to "prove" she is a girl to play sports with her friends.
This is outrageous.

The language in Florida House Bill 1475 would require high school and college sports teams to only allow students to play on a team based on their "biological sex," which means the sex assigned at birth. It would bar transgender females from participating in girls' high school or college teams. However, the bill provides guidelines for determining a student's "biological sex" and does not say that a person would be required to "drop her pants" to verify their gender.

The bill would allow "the school or institution to request a certain health examination and consent form or other statement from the student's health care provider to verify the student's biological sex under certain circumstances," to play on a team.

The bill has language regarding how a dispute about a student's "sex shall be resolved":

Florida Senate Bill 2012 has no mention of how a person's "biological sex" should be determined. The bill does not ban transgender students from playing on sports teams but says they can do so if they meet certain conditions.

Persons who transition from male to female are eligible to compete in the female category if all of the following conditions are met:

Senate Appropriations Chairwoman Kelli Stargel released a statement about taking the bill out of consideration on April 20, 2021, according to CBS4, meaning the bill will not likely be considered in the legislative session that is scheduled to end April 30, 2021. From the news report:

I believe Florida should protect the ability of girls and women to safely participate in athletics, and I think there is consensus among my colleagues surrounding that underlying policy objective," Stargel said in a prepared statement. "We want to get there in a manner that respects the inherent dignity of each person, while at the same time acknowledging the fact that the biological differences between men and women can be significant, and can vary based on how far along a person is within their transition."

Stargel said she decided to postpone consideration of the bill "as we continue to work on this issue." But she also acknowledged that time could be running out, adding that "in a time-limited environment, I don't know that we will have sufficient time to revisit SB 2012 this session."

The Florida Legislature website notes the bill is "Temporarily Postponed."