Did an Irish woman take the gun of her wounded fiance and continue fighting the British army until she was killed? And did someone overhear the comments of the British commander who had called off the fighting so the "Irish could bury their dead"? And lastly, was this photo "chosen" for Women's Day in Ireland and given the motto, "Don't be afraid to be associated with a strong woman the day may come and she'll be your only army."

No: None of these claims can be verified as factual with publicly available information. The photographer, Colman Doyle, gave the photo to the National Library of Ireland with very little information attached to it. The woman's identity, the location of the firefight and the exact date are not recorded with the iconic photo in the archive. When the now elderly photographer was interviewed by Ireland's National Public Service Media, RTÉ, in 2020, his account did not match the tale attached to the photo on social media.

That story has been circulating since November 2019. One example appeared in a post (archived here) where it was shared on April 16, 2021, with the caption, "The strength of a woman." The text included with the photo read:

A photograph taken in Ireland in 1972 of a girl shooting from the gun of her fiance who was wounded in a battle against the British army, her wounded fiance survived after being transported by car to a safe place, while his girlfriend clashed with British soldiers until she was killed.

When the commander of the Battalion of The English Soldiers found out that they were fighting a woman, he ordered his soldiers not to touch her body and allowed the Irish to bury her and they heard the English commander repeat this sentence: We defend a queen who doesn't care about us. And this woman cares about her lover and her land.

The photo was chosen for Women's Day in Ireland and they wrote this sentence: "Don't be afraid to be associated with a strong woman the day may come and she'll be your only army". 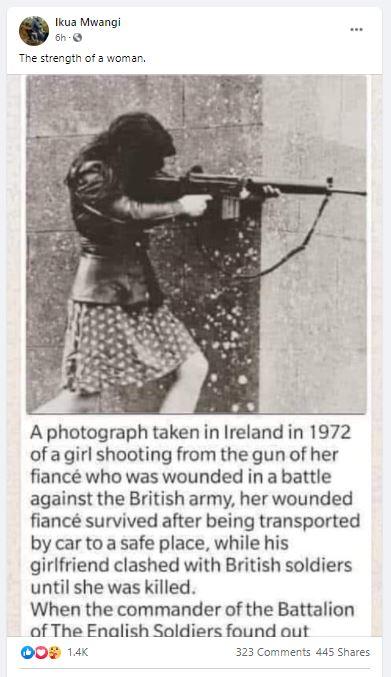 Lead Stories' investigation into this photo uncovered a total of five different photos taken at the same location with the same small group of subjects, three women, two guns and one man.

Plus, had this woman shooting a rifle been killed by British soldiers that day, her death, the date and her name would be known. The story of the wounded fiance and the brave woman who took his place in battle seems to have appeared on social media in November 2019 and does not exist before that. This points to the story being a complete fabrication.

Lead Stories found no publicly available information with an association between this photo and Women's Day in Ireland, or the slogan, "Don't be afraid to be associated with a strong woman the day may come and she'll be your only army," except in duplicate instances of this meme.

On April 30, 2020, Snopes wrote an article about the photo, saying the story associated with it had been circulating on Reddit and Facebook in late 2019 to early 2020. Lead Stories checked this with a Facebook search for "photos" using a phrase from this meme, "A photograph taken in Ireland in 1972 of a girl shooting from the gun." This should return any images posted publicly on Facebook associated with that phrase.

When the search was limited to the year 2019, it yielded many results with Colman Doyle's photo, going back to November, but there were no results for any photos in 2018. This indicates that this phrase did not appear on Facebook until November 2019. 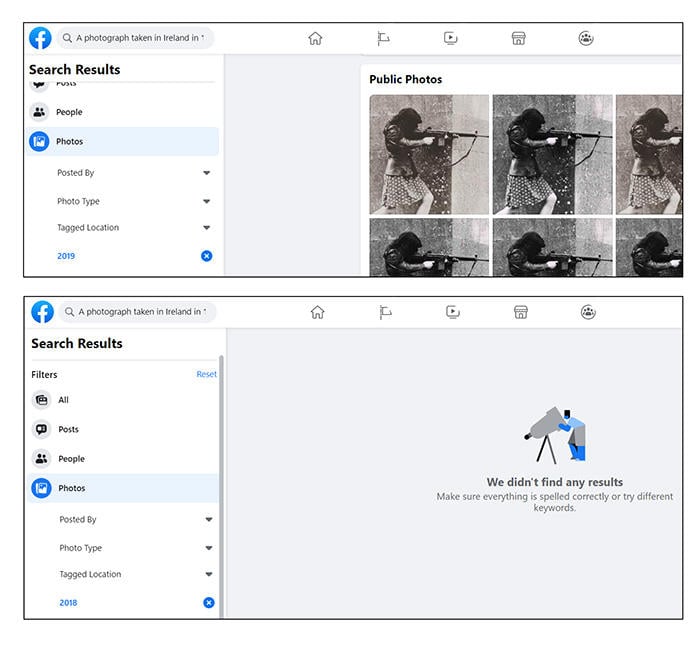 On June 17, 2020, an article titled, "The story behind an iconic Troubles' photo" was published by RTÉ. It includes the photographer's accounts as well as two photographs. One photo, included in the Colman Doyle Collection of the National Library of Ireland titled, "A woman IRA volunteer on active service in West Belfast with an AR18 assault rifle," is claimed by Doyle as his own. The other photo, which appeared in a 1974 "Republican Resistance" calendar and the newspaper Republican News, is identified as propaganda; Doyle denies being the photographer. We will refer to that photo as the "calendar photo."

In the RTÉ article, the tension press photographer Doyle had to find between the Provisional IRA and the Irish Press, where he worked, is apparent:

The photo printed in the Republican News belongs to a series of propaganda shots taken by the Provisional IRA. Doyle acknowledges his close links to the Provisional IRA: 'I got permission from Martin Meehan to take photos of IRA members. The woman in the photo was a member of the Ardoyne unit; she also appeared in other photos of Meehan's unit.' Meehan was a Provisional IRA leader in the Ardoyne area who died in November 2007. 'I had permission to take these photos from Martin Meehan, but the Irish Press told me I was not supposed to take propaganda photos,' Doyle stresses.

Doyle also told RTÉ that the Irish Press refused to print the iconic photo, purportedly because "they considered it inappropriate to print a photo showing a woman with a gun."

Lead Stories was able to find a slightly better reproduction of the propaganda calendar photo pictured in the RTÉ article by using Yandex image search. This resulted in the discovery of several additional photos in the series. Many of the images in this series, now archived by the search engine, came from websites that are no longer operational. 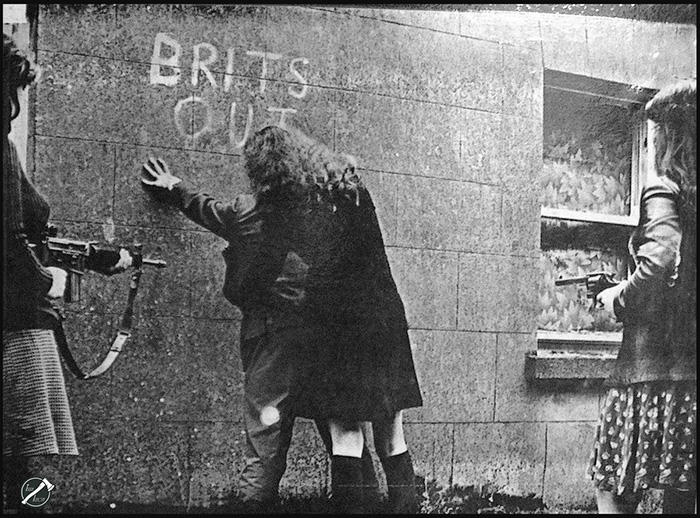 The calendar photo that appeared in those 1974 IRA publications shows a man being frisked by a woman in a black coat. On the wall directly above his hands is graffiti that says, "BRITS OUT." To the left and right are two armed women. In this photo, the woman in the leather jacket is holding a revolver and a woman in a checked skirt is holding the rifle.

Lead Stories found an almost identical photo to the propaganda calendar photo. This image has a seam down the middle as if it appeared on two pages of a magazine or book. The women to the left and right side are more fully visible but this is not merely a matter of the photo's cropping. The perspective has shifted -- the position of the rifle in relation to the window, the amount of the revolver visible -- it is not the same photo.

On the left margin of the photo are some words printed vertically. It is difficult to make out all the words, but it appears to say, "Women of the I.R.A." and "Colman Doyle/ Camera Press" although other words are indistinguishable. We have not identified what publication this edition of the photo came from, but the credits in the margin seem to contradict Doyle's claim that he did not take the propaganda calendar photo. 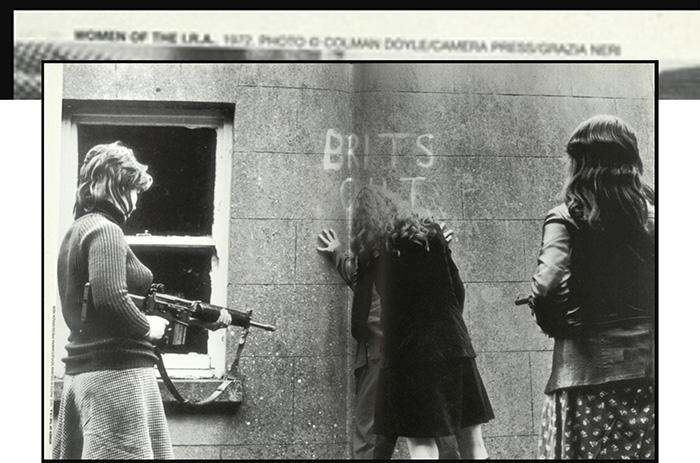 Below is an additional photo from this series: 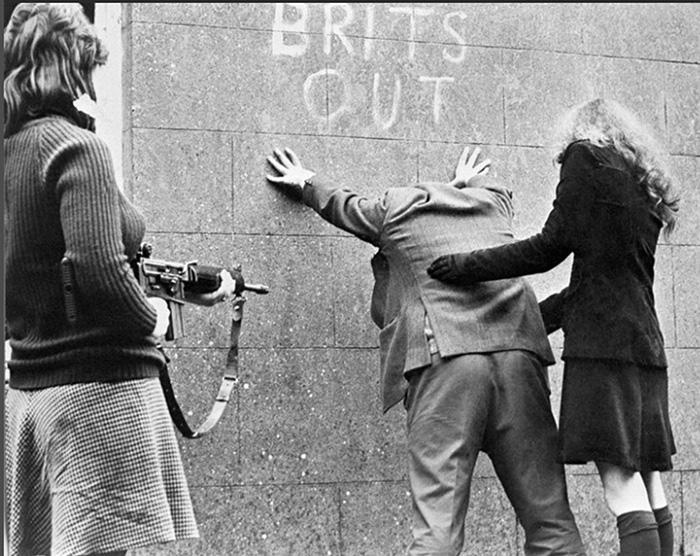 The RTÉ article recounts Doyle's telling of the events of the day this way:

One day in 1973, photographer Colman Doyle passed by Agnes Street on his way from the Ardoyne towards the city centre: 'I heard someone firing shots and then I saw this woman. She was standing behind a corner, still holding that gun but I only managed to take the photo after she had fired.'

In a conversation with the author for RTÉ Brainstorm, Doyle insists that he does not remember the street where the photo was taken, nor the exact date, but claims that 'it was not staged.' The photo shows a long-haired woman in a polka dot dress carrying an assault rifle.

The Snopes article points to an additional photo in a Tumblr post. This photo shows the woman in the black coat, who in the calendar photo had been frisking the man. She seems to now be holding a revolver. The woman in the leather jacket is now holding the ArmaLite AR-18 rifle that the woman in the checked skirt had been holding in the calendar photo. They are posed as if they might be guarding opposite directions. Were this an actual firefight, the photographer would have been in an unprotected position. 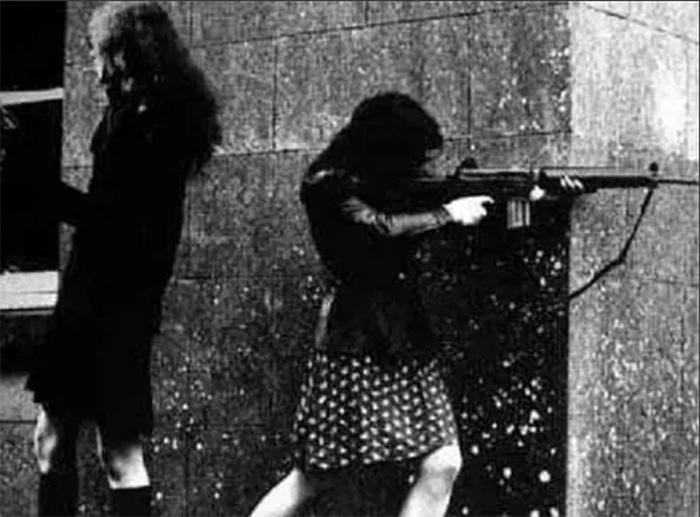 Lead Stories overlaid this image with Doyle's image in the National Library of Ireland. The two photos are different enough to show that it is not a matter of the woman in the black coat being edited into the iconic archive photo -- they are two different photos, one with two women posing and one with a woman alone -- taken from a virtually identical vantage point. 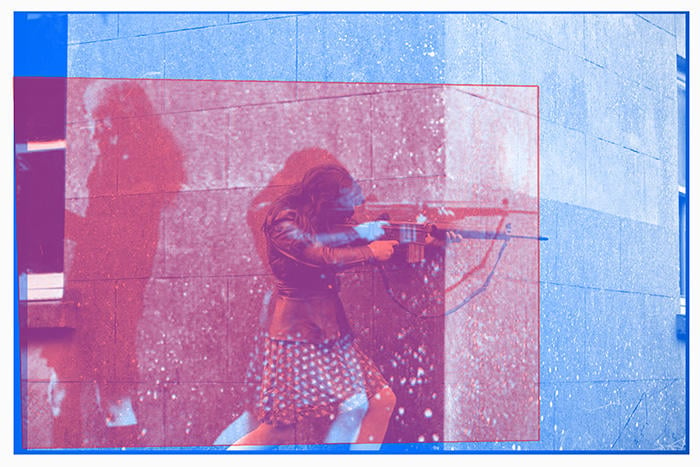