Does placing a wet towel near the cutting surface when slicing onions prevent crying by absorbing the irritating enzymes released? No, there is no evidence that this cooking hack works better than any other methods. The reason why slicing onions makes cooks cry is a complicated reaction between various enzymes released from the onion's sliced cells that form to produce propanethial S-oxide.

When this comes in contact with the human eye, crying is the result -- the body's response to try to flush the irritant away. There is no evidence that free-floating propanethial S-oxide in the air is drawn to water or that a moist towel nearby would reduce the amount of irritant that could potentially come in contact with the cook's eyes.

This tip and variations of it -- including a cup of water and wetting the forearms, are classic onion chopper's lore. This version was shared in a July 14, 2021 post in a Facebook group for "Easy Family Recipes and tips." It's captioned:

I DIDN'T KNOW THIS! DID YOU?
The reason you cry when you chop onions, is that the chemical in the onion is attracted to the nearest source of water, which is usually the eyes. If you place a wet paper towel next to your onion while cutting the wet paper towel will absorb the chemical instead of your eyes.
Now THIS is a tip you can use!
I'm definitely going to try this out!
📌 Amazon blank recipe book to write all your best recipes foods yummy 🍔 just 5,99 USD , Your Own Custom Cookbook
-> https://www.amazon.com/dp/B093R7XP82
#5dishchallenge 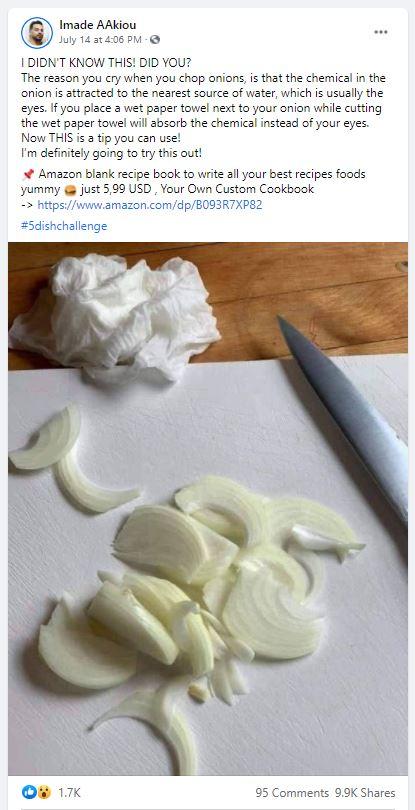 The onion's eye irritant, propanethial S-oxide, is not present until the onion is sliced and the enzymes combine to produce it. The scientific understanding of the chemistry behind the onion's potent irritant, or lachrymator, has advanced in recent years. Once thought to be a one-step reaction triggered by slicing the onion, in 2002 scientists discovered another enzyme in onions, and that it is a two-step process that results in the formation of the irritant. Their plant biochemistry findings were published in an October 17, 2002, article in the peer-reviewed journal Nature.

After discovering that the eye irritant is not produced if any one of the three enzymes is not present, the scientists thought it might be possible to develop an onion variety that lacked the lachrymatory factor synthase enzyme and would not cause crying.

The irritating lachrymatory factor that is released by onions when they are chopped up has been presumed to be produced spontaneously following the action of the enzyme alliinase, which operates in the biochemical pathway that produces the compounds responsible for the onion's characteristic flavour. Here we show that this factor is not formed as a by-product of this reaction, but that it is specifically synthesized by a previously undiscovered enzyme, lachrymatory-factor synthase. It may be possible to develop a non-lachrymatory onion that still retains its characteristic flavour and high nutritional value by downregulating the activity of this synthase enzyme.

Lead Stories was unable to find any evidence that indicated these onion enzymes are drawn to water or moist surfaces. H2O is part of the lachrymatory factor, but H2O is already present in the onion.

There are some onion-chopping anti-crying tips that do include water -- cutting onions under water or under running water, but in these cases the water is acting as a direct barrier to the eye irritant from rising into the air. Another method, goggles, blocks the lachrymator in the air from coming in contact with the eyes.

The National Onion Association offers several tips but none include methods intended to draw the lachrymator away from the eyes of the cook with water. Along with the bullet points below, there is a graphic that suggests that the highest concentration of the sulphur compounds that react with the enzymes are in the root end of the onion.