Is a meme correct in implying vaccination ("the shot") is not working to prevent COVID-19? No, that's not true: Since it uses an image of a comedian's fictional rapper character, "Ali G," it may be satire. But the apparent reference to vaccinated people still getting sick ignores the fact that the point of vaccination campaigns is to sharply limit the number of hospitable bodies in the overall population so that the virus can't reproduce as rapidly.

No vaccine, even those credited with wiping out lethal childhood diseases, is 100% effective. COVID's vaccines have been documented to reduce the symptoms of "breakthrough infections." Also, the creator of Ali G has taken to Twitter to encourage people to fight the pandemic by getting vaccinated.

The meme was widely shared on social media, including in this August 15, 2021, Facebook post (archived here), which carried the title "SO IF THE SHOT WORKS" and continued:

WHY IS THE SHOT NOT WORKING

The consensus of medical experts and public health agencies is that lab and clinical studies clearly show vaccination in most cases will:

Like a shotgun whose pellets don't all hit the target, less-than-perfect vaccines still take down viruses.

Whether or not the shot works for every patient is immaterial in the context of pandemic fighting, since even a partially effective vaccine slows the spread of infection, improving the odds that people with life-threatening cases will find space in a hospital and reduce the number of deaths and other impacts of widespread serious illness.

U.S. public health campaigns use numerous vaccines that are less than 100% effective to combat dangerous viruses and they work well to reduce illness. The HPV vaccine program has decreased HPV by 86% in female teens aged 14 to 19 years and 71% in women in their early 20s. The vaccine against the 2019-20 seasonal flu proved about 39% effective. Measles vaccine is about 97% effective, the Centers for Disease Control and Prevention (CDC) reports and the World Health Organization estimates measles vaccination campaigns saved more than 17 million lives between 2000 and 2005.

The diphtheria/pertussis shot (DTaP) is 80% to 90% effective and yet, as the following chart shows, the number of pertussis cases dropped dramatically after the vaccination campaign started in the 1940s, even as the U.S. population grew. Pertussis cases began growing again when celebrities began campaigning against vaccination, driving down vaccination rates. 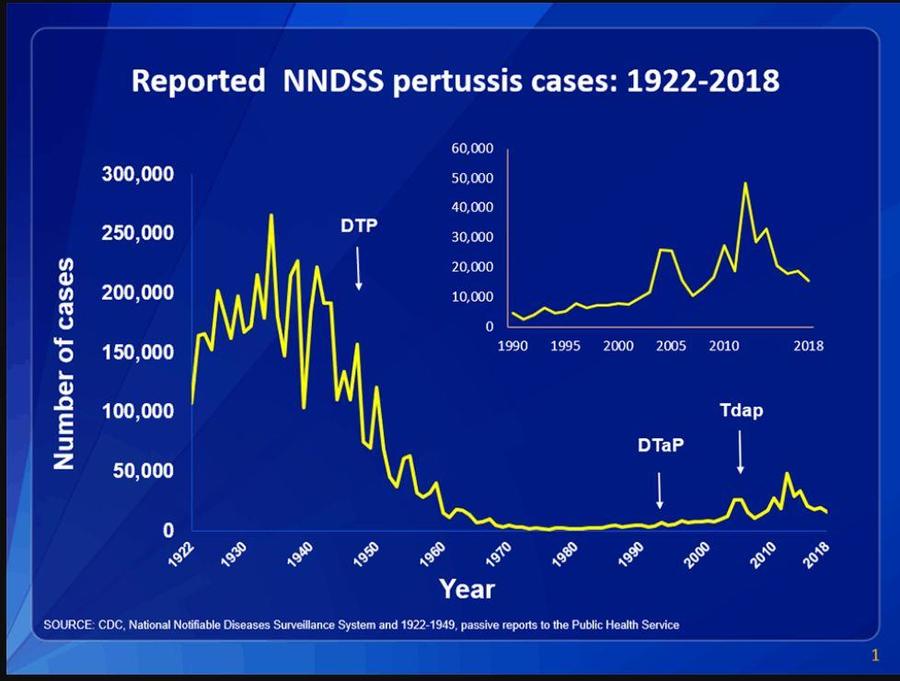 Research during the COVID-19 pandemic shows the vaccine is working, Pavitra Roychoudhury, Ph.D., wrote in an August 19, 2021, email responding to Lead Stories' questions about a related online attack on vaccination.

She is a laboratory medicine instructor at the University of Washington and runs a team that tracks changes in the virus. Roychoudhury was a postdoctoral research fellow in vaccine and infectious diseases, is a published co-author of scholarly articles and a conference speaker on SARS CoV-2 testing.

All vaccines are designed to elicit an immune response that fights the virus. The response is not binary and there's variability in both the strength of the response elicited within the person, and also in the effectiveness of that response against the virus ... no vaccine is 100% perfect but that doesn't mean there's no protection. In fact it has been shown that vaccines are effective against all variants.

Roychoudhury said the trend of hospitalizations and deaths clearly shows the power of vaccines to slow the infection's spread and reduce the numbers killed by the virus, citing a New England Journal of Medicine's informal report from COVID researchers and a peer-reviewed study in The Lancet.

By mid-August 2021, about 170 million people in the U.S. had been fully vaccinated. Roychoudhury said researchers have amply shown the vaccine does what it is supposed to do: prevent infection, slow the spread and reduce symptoms:

Among "many" sources of proof, she specifically cited the fact sheet from the CDC and another from its counterpart in the European Union.

Lead Stories reached out to representatives of Sacha Baron Cohen, the British comedian who appears in the meme in costume and makeup as one of his fictional characters, a rapper he calls "Ali G." Cohen uses him to skewer upper-class white youth who try to "act black" by adopting Jamaican patois and rapper catch phrases.

Cohen uses his Twitter account to criticize Facebook CEO Mark Zuckerberg and other social media executives for not doing more to prevent the use of their platforms by racist and sexist organizations.

In March, he posted this tweet urging people to ignore misinformation about the pandemic and vaccines:

"Bill Gates is using Covid vaccines to implant microchips in our arms!"

It's a lie spread by social media causing people to refuse the vaccine, which means more deaths.

(Since February 2019 we are actively part of Facebook's partnership with third party fact checkers. Under the terms of this partnership we get access to listings of content that has been flagged as potentially false by Facebook's systems or its users and we can decide independently if we want to fact check it or not. In addition to this we can enter our fact checks into a tool provided by Facebook and Facebook then uses our data to help slow down the spread of false information on its platform. Facebook pays us to perform this service for them but they have no say or influence over what we fact check or what our conclusions are, nor do they want to.)