On November 5, 2021, a website named Conservative Beaver published a false story about the CEO of Pfizer being arrested for fraud. It wasn't the first false story published by the website and it wouldn't be the last: Only a few days later the site falsely claimed Myriam Bourla (the wife of Pfizer's CEO Albert Bourla) died because of vaccine complications. The fake stories generated massive amounts of engagement in anti-vaxxer circles worldwide.

Predictably Pfizer wasn't happy about this and according to Courthouse News they filed a petition (archived here) with the Supreme Court of the State of New York on November 16, 2021, to compel hosting company DreamHost to reveal the identity of the site owner with an eye to further legal action. From the filing:

12. Petitioner intends to file a lawsuit against the individual(s) operating the Conservative Beaver for, among other things, defamation.

13. To date Petitioner has not, having taken reasonably diligent steps, been able to determine with certainty the identity of John/Jane Doe(s). The website in question does not identify the registrant or operator, nor does it provide any physical address or phone number, thereby rendering it impossible to identify John/Jane Doe(s).

14. Petitioner thus needs information about the registrant of the Conservative Beaver so that it may properly identify John/Jane Doe(s) as defendant(s) and frame its cause(s) of action against him/her/them. Specifically, Petitioner must know information about the registrant and/or operator of www.conservativebeaver.com in order to frame a complaint. The website provides only an anonymous e-mail address, to which Petitioner has written requesting that the defamatory material be taken down. To date, Petitioner has not received any response.

15. The information sought by this petition about the identity of the owner(s) and/or operator(s) of Conservative Beaver should be contained in records regularly maintained by Respondent, which based on searches of the Internet Corporation for Assigned Names and Numbers (ICANN) database, is the registrar for the site www.conservativebeaver.com. Petitioner has asked Respondent to provide this information voluntarily, but to date has not received any response.

Pfizer probably aren't the only ones interested in finding out who is behind this website given its history of publishing false information: It also falsely claimed that George Soros was arrested for election interference, that the pope was arrested for child trafficking and that Brian Laundrie was found alive.

Lead Stories did some digging and found there are several strong clues pointing to Mark Slapinski, a Toronto-based journalist, as the owner or operator of the site. Which is quite surprising since Slapinski appears to be strongly pro-vaccination on his own social media channels.

About the Conservative Beaver

So, who or what is the Conservative Beaver? The front page of the site shows several recent (real) news stories and at first sight it looks like a regular news website: 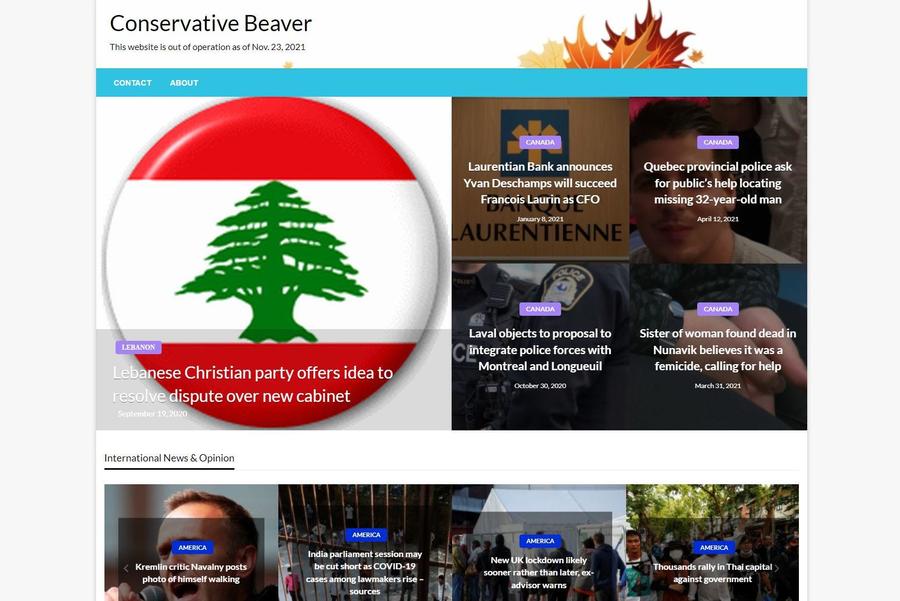 (Source: screenshot of conservativebeaver.com taken by Lead Stories on November 24, 2021)

As you can see at the top of the page, the website claims to be "out of operation as of Nov. 23, 2021," likely as a result of the lawsuit threat. The false stories about the Pfizer CEO and his wife also appear to have been deleted.

The about page of the website used to say this until recently:

The Conservative Beaver has been informing Canadians for over 10 years.
Starting in a U of O dorm room, eventually spreading through Montreal as an underground newspaper. We've now become available online for consumers Canada-wide.

We provide original articles, as well as aggregate news from your favourite alternative sources.

We don't just talk about conservative news. We bring you the stories that matter. The ones that you won't hear about on the mainstream networks. That's why we're here. To give you a different point of view, and to keep you informed.

Run by a small team of volunteers across Canada. Looking to lend your skills? Email [email protected]

We are self-funded, and have not accepted any grants for this project.

The Conservative Beaver informed Canadians and made them smile for over 10 years.
Now, it is time for us to go. Thanks for tuning in.

Disclaimer: Our stories mostly featured real events and were factually accurate, however some of our stories were satirical works of fiction and never meant to be taken seriously.

Note: The "10 years" part is a provable lie. The domain name for the website was only registered on September 19, 2020, according to Whois.com (archived here).

Most of these false stories appear to have been posted by a user account with the name "conservativebeaver_skphjv" (archived here).

The Conservative Beaver used to run advertising on Google's AdSense platform (until it got reported earlier this month). For example, in this older article you can still see the Google Adsense code "ca-pub-5958167306013620" in the HTML source code. That exact same code was also present in the HTML code of a (now defunct) website named Toronto Today, that according to its About Page was "Founded and run by Mark Slapinski." Earlier that site used to be named The Red Panther but the name was changed and it started redirecting to Toronto Today somewhere in the summer of 2020 (compare: before, after). The site used to feature a similar mix of real and fake news stories.

On December 9, 2021 the same AdSense code also started showing up in the HTML source code of an article on the website Toronto99.com (archived here).

The contact page of The Red Panther listed "mark dot slapinski at ymail dot com" as the email address to reach the owner: 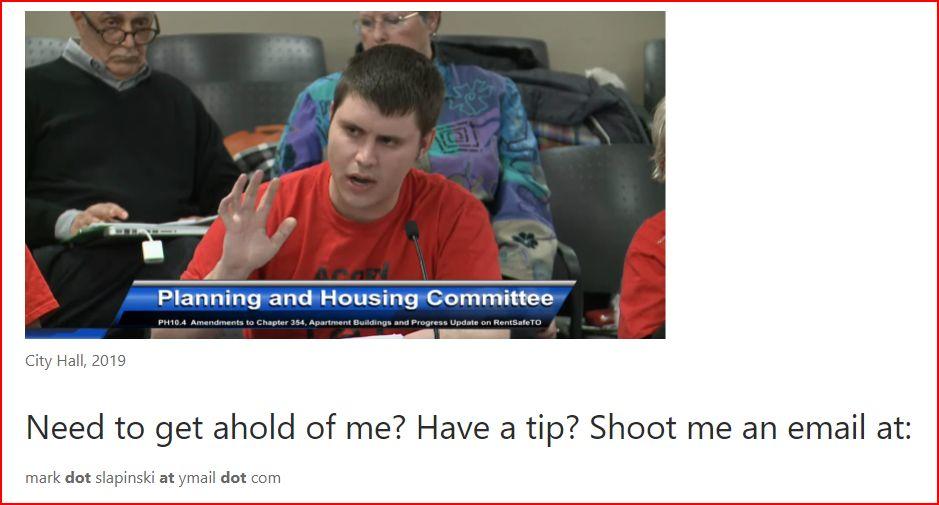 The Conservative Beaver website also uses the services of Gravatar.com, an online service that websites can use to generate unique profile images for their users based on their email address. Looking at the HTML source code of the articles posted by "conservativebeaver_skphjv" their Gravatar image appears to be located at https://secure.gravatar.com/avatar/97c41ee7f5b59e4e916acd2d775aa5cd?s=40&d=mm&r=g.

Note that Gravatar generates the unique code in the url (the "97c41ee7f5b59e4e916acd2d775aa5cd" part) by taking an MD5 hash of the email address of the user. If you run an MD5 hash of the string "[email protected]" at https://www.md5hashgenerator.com/ you get that exact same code:

According to his Twitter profile (archived here) Mark Slapinski appears to run a website named Toronto99.com these days: 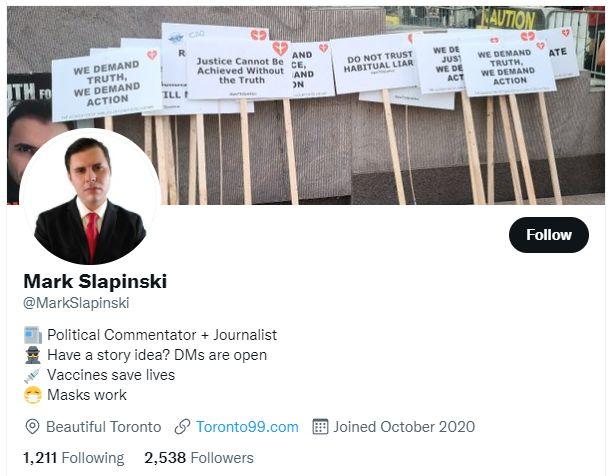 When looking at the user list of the website Toronto99.com here (archived here) it appears the user "toronto99_328v30" has the exact same Gravatar image and code as the user on the Conservative Beaver, meaning it is configured using the exact same email address.

The About Page of Toronto99 (archived here) reads:

Toronto 99 is a trusted source for alternative news.

Toronto 99 was started in 2021 by Mark Slapinski for the purpose of featuring stories and angles that are not properly represented by the mainstream media.

Does this mean Slapinski was running the Conservative Beaver site too? Or is he being framed by someone who deliberately set up a website with the same email and advertising code? That last option seems unlikely given the amount of effort it took to decode the trail of breadcrumbs here. And it seems equally unlikely someone would not notice Adsense advertising money or system emails coming in for several months related to a totally unknown website.

So who is Mark Slapinski?

According to his LinkedIn profile (archived here - PDF) Slapinski is:

Currently putting my blogging and social media skills to use on a project called Toronto 99. Featuring a mix of original articles, original videos, commentary, analysis, as well as aggregated news from reliable sources.

A graduate of Seneca's Social Media post-grad program. Previously responsible for managing social media accounts for Toastmasters, Slammin Media, New Arts, and for Housing-rights related events. Experienced in using social media for private and charity events, including the 650 Parliament Benefit show at Tranzac in Toronto. My social media and advocacy work has been shown on local Toronto news multiple times.

Via Toronto 99's Twitter account (archived here) he let the world know today that he does not publish false information:

Toronto 99 has updated its editorial standards:https://t.co/05qQYZLLmv

On Twitter (archived here) Slapinski claims to be pro-vaccine, so much so he claims he has been persecuted for it by actual neo-Nazis:

#Antivaxxers and neo-Nazis want me dead for my advocacy on vaccines. This is my response.pic.twitter.com/HDzVFy1ufC

His Instagram and TikTok account feature videos of him defending vaccination, attacking anti-vaccine activists and claiming to be vaccinated himself:

So is this the man Pfizer is looking for so they can sue him for defamation over two of the biggest false vaccine-related stories of recent months?

Lead Stories has reached out to Slapinski for comment and will update this story if a reply is received.