Do respirator masks prescribed to reduce viral spread contain nano-robot parasites called Morgellons? No, that's not true: "Nano" describes structures one billionth of a meter across, which makes the video images impossible, since it shows a fingertip alongside the purported nano-bot. Scientists have been unable to verify the existence of any parasite that could be causing "Morgellons Disease," which the Mayo Clinic describes as a "controversial unexplained skin condition" that some doctors describe as a delusional infestation and others say is just fibers from band-aids or clothing that get stuck in sores or scabs and which patients misidentify as parasitic worms or nano-bots.

The claim about man-made nano-size parasites in masks has circulated widely on social media, including in this January 8, 2022, Facebook video (archived here) where it was published under the title "You need to watch this!" It opened:

Do you know where Morgellons came from? 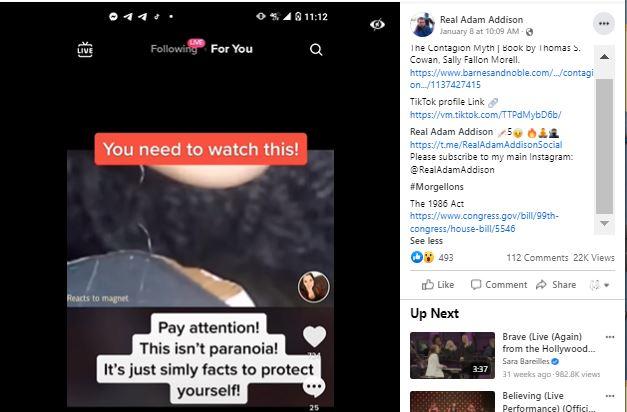 They are 100% manmade through nano-technology ... You don't believe us? Let us show you the evidence. Which by the way is very easy to find. All you have to do is a little experiment. Let's start with a mask, shall we? Place the mask over a bowl of hot water which resembles the effect of your exhalation ... Now put the mask on the microscope and behold, Morgellons in your face mass, manmade nano-bot technology fibers that behave like parasites that are activated when you breathe ...

FALSE CLAIM: The pictured nano-bot "Morgellon" is too large: approximately 1/50th the width of a human fingertip

FALSE CLAIM: A nano-bot "Morgellon" would be visible to the human eye, as is the fingertip

Objects made at nano-scale cannot be seen with a light microscope, since they are smaller than the wavelength of light. Engineers and scientists working at nano-scale use scanning electron microscopes and other technologies that make visible that which is a thousandth the thickness of a human hair. Whatever light-based viewing mechanism is used in the video, it shows the fingertip at approximately full-size, at which magnification a nano-object would be invisible.

Science blogger Paige Brown Jarreau, a biologist/agricultural engineer with a Ph.D. in communications, frames the invisibility of nano-objects to humans as follows: "It's difficult to imagine just how small that is, so here are some examples: A sheet of paper is about 100,000 nanometers thick."

Scientists at the Mayo Clinic, a Rochester, Minnesota research center and medical school that employs about 4,500 physicians and scientists, describe Morgellons Disease as follows:

Some doctors recognize the condition as a delusional infestation and treat it with cognitive behavioral therapy, antidepressants, antipsychotic drugs and counseling. Others think the symptoms are related to an infectious process in skin cells. Further study is needed.

The most recent peer-reviewed index item on Morgellons Disease in the National Library of Medicine is a January 2021 article from the peer-reviewed science journal Hand, titled: "Morgellons Disease: The Spread of a Mass Psychogenic Illness via the Internet and Its Implications in Hand Surgery." It was co-authored by four medical doctors specializing in plastic surgery.

The Facebook post is based on a film available on the internet that proposes numerous conspiracy theories to explain the COVID-19 pandemic.